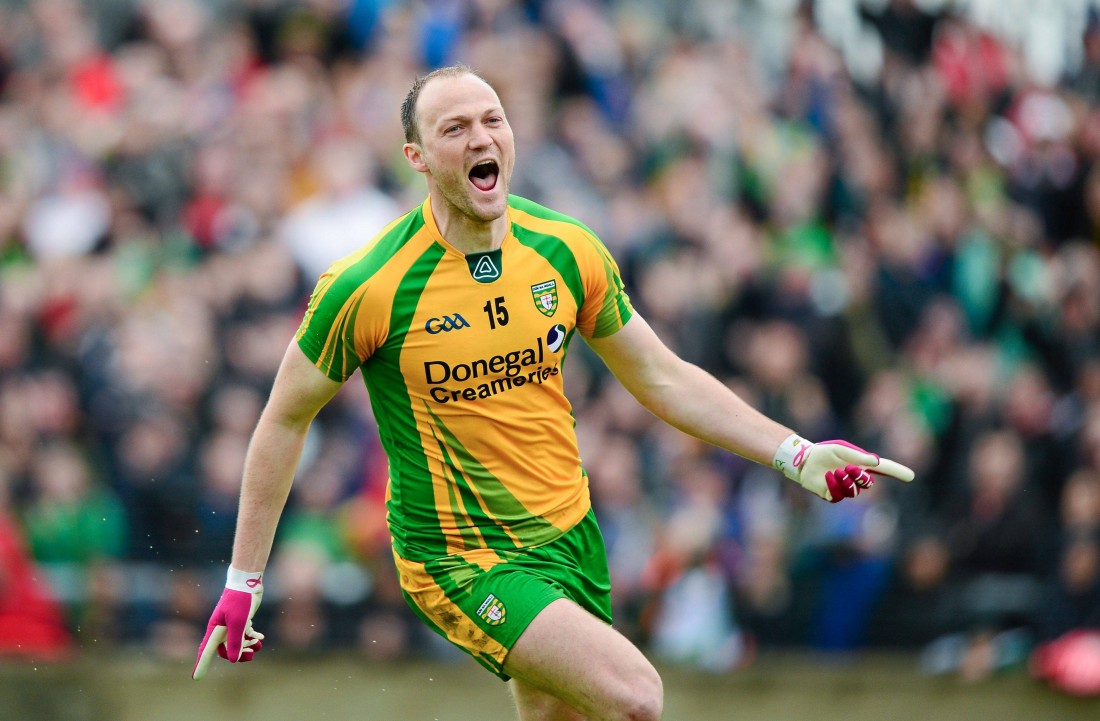 DONEGAL continued the blow off of the winter cobwebs with a useful nine-point win over Roscommon in Convoy.

The new kid on the block, Darach O’Connor, and the old dog for the hard road, Colm McFadden, netted a goal in either half for Jim McGuinness’s side, for whom this was a worthwhile exercise.

For Roscommon, the loss of talisman Donie Shine to a black card infraction ten minutes into the second half was a fatal blow to their hopes of recording a win from their trip to the north-west.

Shine and Cathal Cregg each hit two apiece within seven minutes of the start of the second period, pulling the Rossies back to within two points, after Donegal had led 1-7 to 0-4 at the break.

But Shine fell victim to the new rules having checked the run of a Donegal man, Shaun McLaughlin waving the black card and the Clann na Gael man going off to be replaced by Fintan Cregg.

The loss of Shine was a game-changer in that it effectively nullified Roscommon’s threat – John Evans side didn’t score again until a pair of late points from subs Finbar Cregg and Ciaran Murtagh.

Donegal deployed another strong line-up with seven of their 2012 All-Ireland final team on from the off, the signs continuing that this will be serious business from the off by Donegal in 2014.

Among the bright sparks were the 1-4 scored by the again razor-sharp McFadden, as while Leo McLoone turned in a fine shift at centre half-back. The Naomh Conaill man had been earmarked for that role at the very beginning of McGuinness’s tenure, before injury forced a re-think, and it now appears as if he’s again being groomed for a go at number six.

O’Connor, the 2013 minor captain, who happens to be the son of former Roscommon star John ‘Jigger’ O’Connor, netted Donegal’s opening goal early in the game. His shot mightn’t have been his most convincing, but it had enough on it to get by Tadgh Logue in the visitors’ net.

McFadden (2) and Dermot Molloy had popped over Donegal’s early scores with Roscommon struggling to find much conviction. McLoone landed two well taken scores, the second of them a particularly eye-catching finish, to move Donegal 1-5 to 0-1 ahead.

Ciaran Devaney fired wide in a position from which he ought to have tested Michael Boyle’s reflexes, but Cregg and Shine broke their famine with a quick-fire brace.

Shine landed another free late in the half, but Donegal were six ahead at the short whistle.

O’Connor was heavily involved to tee up McFadden and Declan Walsh polished off Donegal’s next attack to keep the ball rolling.

With Roscommon having mounted something resembling a purple patch with four in a row, they were dealt a blow when Shine had to leave and Donegal pounced.

McFadden delightfully curled over a free from distance and sub Gary McFadden, who put in a good shift when introduced, made it a four point game before Donegal effectively made the win safe with their second goal in the 53rd minute.

Odhrán MacNiallais had found game time limited during 2013, but the Gaoth Dobhair man is expected to get a good run out in the McKenna Cup – and he was another to show some bright sparks here. It was he who made the play for McFadden’s goal, a strong burst in from the left-hand side seeing him off load to McFadden, who side-stepped the ‘keeper to score.

Molloy scored three points in a row and Murphy tapped over a free to complete a decent evening at the office.

All the while, McGuinness was demanding perfection from the sidelines, but he can head for the McKenna Cup at least encouraged by the aforementioned McFadden, O’Connor, McLoone and MacNiallais while Rory Kavanagh worked hard at midfield in a side whose fitness levels are impressive for December 29.