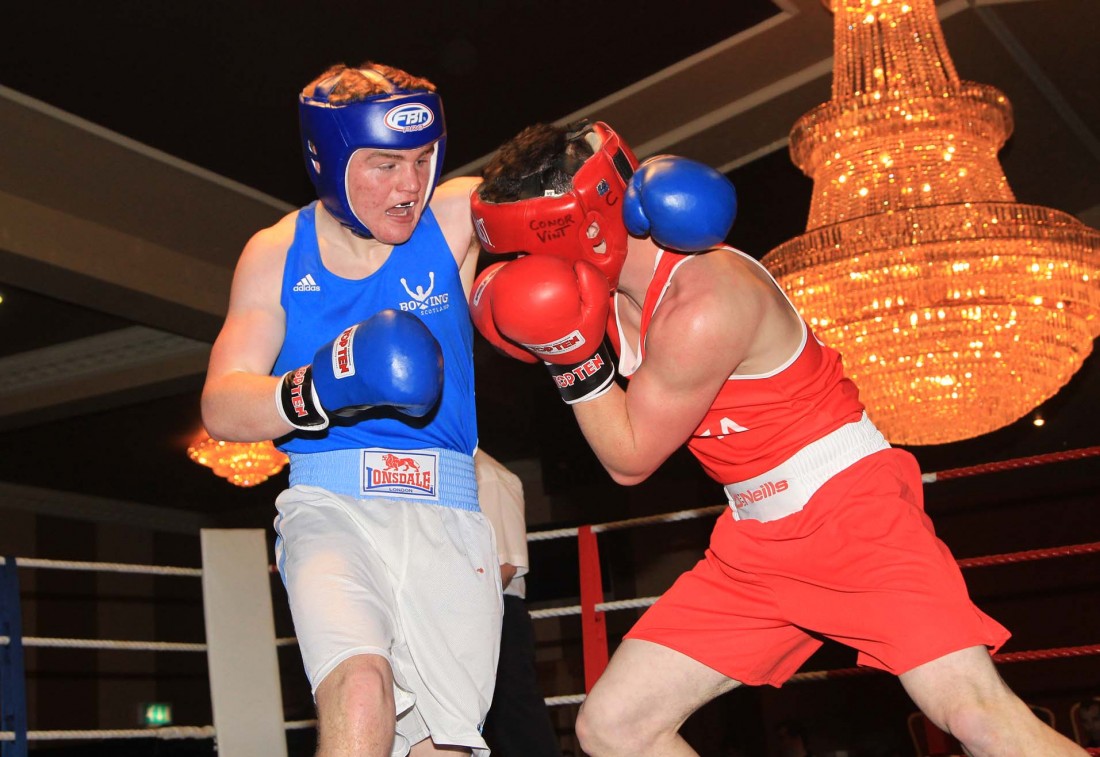 By Chris McNulty, Ringside at The Halfway House

THE 2013 boxing calendar drew to a close yesterday with Donegal toasting several successes at the Ulster 9 Counties Championship finals, held in the Halfway House, Burnfoot.

In all, fourteen gold medals are back in Donegal, with yet more glory for Brett McGinty and  Bryan McNamee on a day when the stars of Callum Toland, Stephen Bonner, Kevin McMonagle and Joseph Redden also shone.

St Johnston powerhouse McGinty, who dons the gloves of Derry’s Oakleaf club, blasted his way to a 3-0 win over Conor Vint from Gilford in the Youth 1 70kgs final for what was his eighth win at provincial level.

The five-time Irish champion and 2012 European bronze medal winner was fresh having taken under a minute to defeat Strabane’s Conor McHugh in the previous day’s semi-final.

A wicked blow to the body gave McGinty a path to the final – and a rematch with Vint who had tried, and failed, to make the weight at 66kgs for these Championships.

Three weeks ago, he defeated Vint in emphatic fashion at the Oakleaf club show at Pilot’s Row.

Yesterday’s was another outlining of the potential within the arms of the flame-haired assassin.

There were only fleeting signs that Vint had learned from their last meeting. The first round was an even match, until McGinty found his rhythm after landing a magnificent left hander.

McGinty finished the first round very strongly, a rocketing left-hook concluding the round in comfortable mode. If he had been somewhat lethargic to begin with, McGinty really came into his own for the second round.

Vint was saved by the bell in the second round, with a potentially lethal left by McGinty sending him to the stool relieved that he hadn’t taken more of those jagged darts.

Indeed there were moments where McGinty appeared likely to land a blow that would finish it inside the distance.
Vint was also more than a little fortunate to have escaped a warning from the referee, Sadie Duffy, as he resorted to a frustrating spell of prolonged holding in that second round.

The Gilford fighter came under fire again at the close of the round and it was again scored firmly in the blue corner’s favour.

Vint had a brief moment of joy in the final round, peeking narrowly between McGinty’s paws to land a clean right-hander. But McGinty really rattled his cage with a heavy body shot that had the man in red lagging and clearly perturbed when time was called on the contest.

Toland is another St Johnston native boxing out of Oakleaf’s corner. A first cousin of McGinty, Toland’s stock is on the rise too.

Named as the boxer of the night at his club’s recent tournament, Toland blitzed his way to the final thanks to a unanimous semi-final win against Dockers’ Danny Lavery on Saturday.

Yesterday, his was a relentless swoop against Sean Breslin of Mourne in the Boy 4 54kgs final.

It is to Breslin’s credit that he lasted the distance for Toland was in blistering form in each of the three rounds.

Such was his dominance, he took a 30-27 verdict in each round. A whopping left hook early in the opening round set the tone for what would follow.

It had been a punishing experience for Breslin, but for Toland it was elation and a first Ulster 9 Counties title, while his club celebrated an excellent five out of five with Tom Stokes, Francie Stokes and Conor Long winning their respective divisions.

Convoy’s ace in the pack McNamee is another who continues to grow, though he no longer comes in under the radar having recorded some notable wins of late.

He added the Boy 4 60kgs medal to his stash yesterday after an impressive stoppage of Ricky Moore from All Saints.

As the first 90 seconds evolved, McNamee grew in authority, standing as a strong and domineering figure in the blue. Moore was over-powered by the tough Convoy boxer, who upped the ante with every swing.

When Moore retreated to the red corner at the end of the round, he wouldn’t return for the next, handing McNamee a comfortable win and another title for that ever-growing mantlepiece. 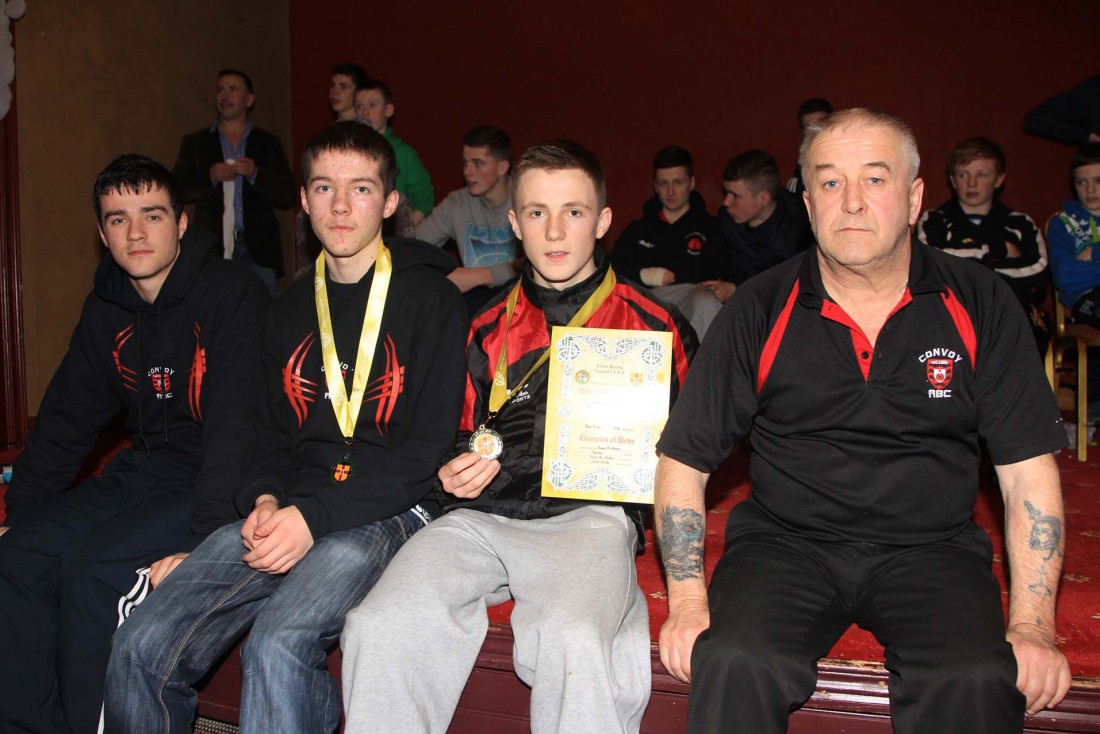 His team-mate Ruaidhri McElhinney had no luck in the Boy 4 63kgs decider, with Banbridge puncher Dominic Doyle taking the verdict in all three rounds.

A crashing right-hander in round two wasn’t enough to sway that verse in his favour and Doyle pressed home the decision in the third round to take a deserved win. In an all-Donegal final at Boy 5 46kgs, Dungloe’s Kevin McMonagle overcame Gareth Harkin via a second round stoppage.

A clever southpaw, McMonagle had the better of the opening round and it was only by a fraction that Harkin survived having to take a count, with the bell gone for the end of it when the referee counted.

Midway through the second round, however, the contest was stopped when McMonagle forced Harkin to take a count, and the Clonmany man was unable to continue. 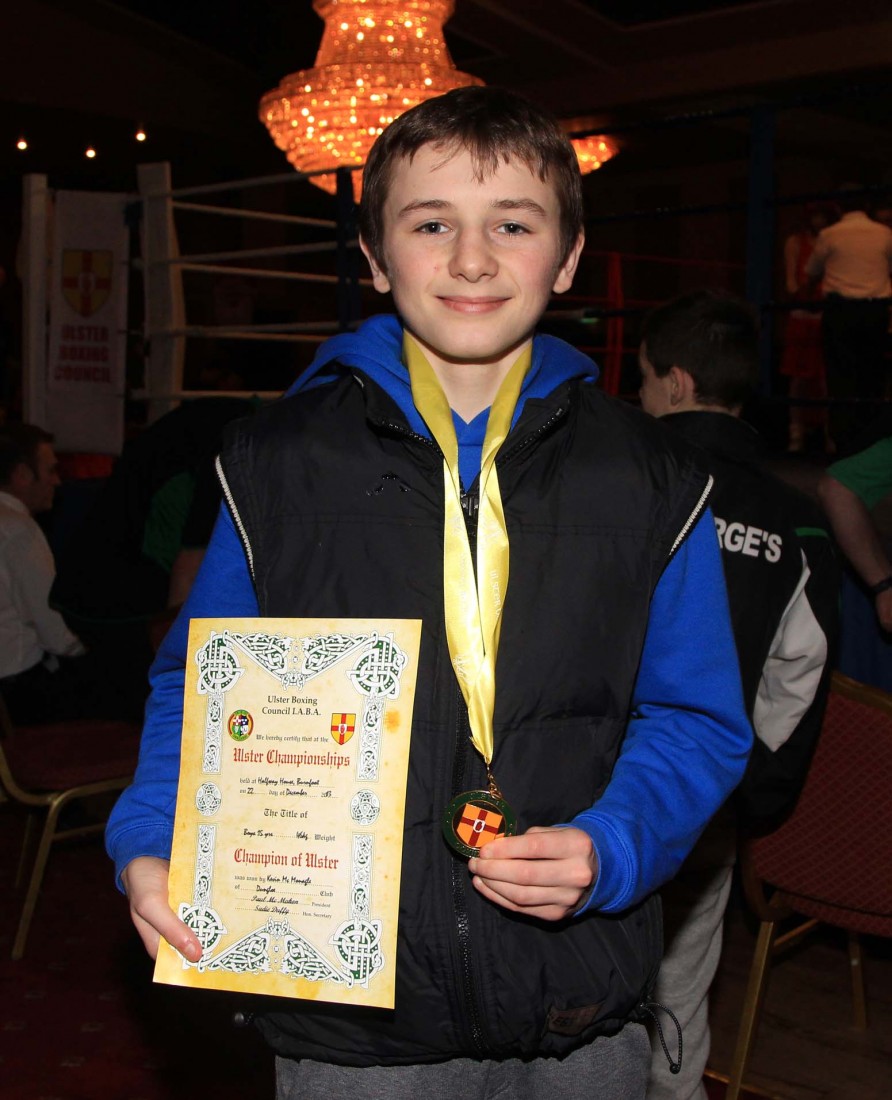 In a rousing Youth 1 91kgs final, Buncrana’s Stephen Bonner stopped St Joseph’s man Darragh Carlin in the second round. Bonner had been in control of the bout and the powerful Inishowen man took the prize when he gave Carlin a second count of the round.

It was a shame that a large portion of what had been a capacity crowd had left before the belting 66kgs contest, which saw Illies’ Joseph Redden defeat Letterkenny’s Michael Ward. Their’s was a real war of attrition that was to the credit of both men.

In addition to the titles won on the canvas, a further eight returned to Donegal clubs by virtue of walkover wins.