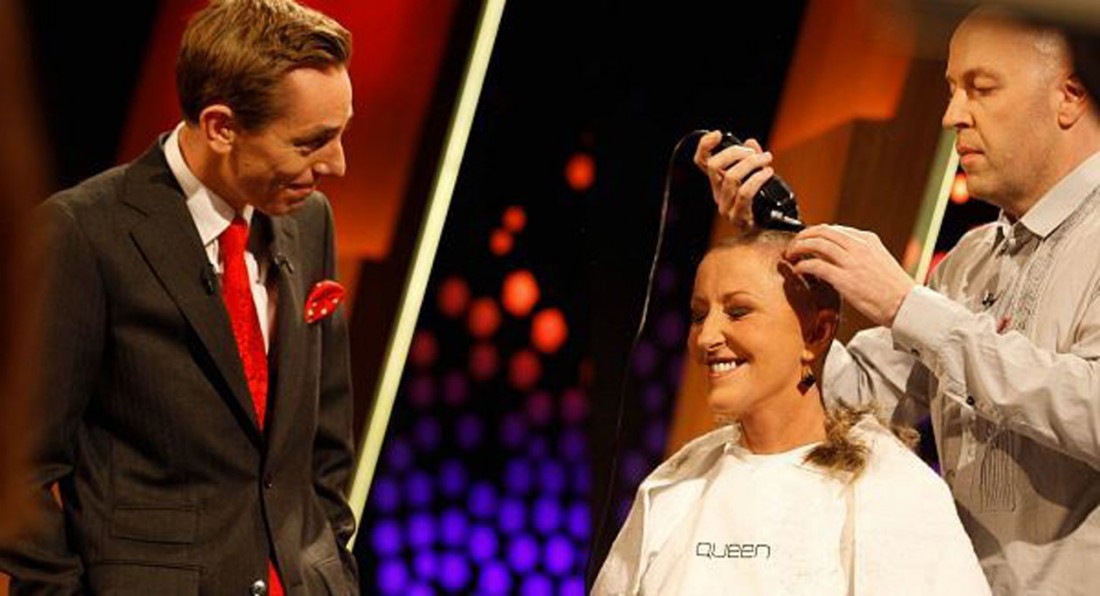 Brave Majella O’Donnell when recently got hair hair shaved off on the Late Late Show raising much-awareness and funds.

MAJELLA O’Donnell has said she is going to take the brave step of having a mastectomy in the new year to remain cancer-free.

The 53-year-old wife of Kincasslagh singer Daniel O’Donnell will have one of her breasts removed in a preventative operation planned after undergoing chemotherapy for breast cancer.

“I’m fine now but I will be having a mastectomy, but that’s prophylactic as they say. It’s preventative. I don’t have it at the moment, so anything I do from now on is to prevent it coming back.

“I feel great. I think once you have chemotherapy out of the way, you feel on a high anyway because you don’t have to go through that hopefully again,” she said.

Majella was reunited with her husband for the first time since October 26 this week when Daniel landed back from his US tour.

The couple attended a ribbon-cutting ceremony at Clery’s Department store in Dublin on Tuesday where they were greeted by many well-wishers.

“I got very emotional seeing Daniel; there were lots of smiles and hugs because it was the longest time we’ve ever been apart. So that’s why I had to come today, I couldn’t let him out of my sight.

“I’m used to him being away, that’s the way our marriage has always been. But having said that, usually when he’s in America for that length, I go with him. This is the first time I haven’t gone with him, because I was having the treatment.

“So in that respect, it was hard, but it was probably harder for Daniel,” she told the Irish Independent.

In the interview published on Wednesday, Daniel said he ‘missed a beat’ when he first saw his wife at the airport.

“I’ve been away for six weeks, which is a long time. We had a great reunion at the airport when she came to pick me up,” Daniel said.

Majella and Daniel were in great spirits at the event, but are now loooking forward to a quiet Christmas following a tough year with her illness and the passing of Majella’s father Tom in Tenerife in October.

During the summer Majella went on RTÉ’s flagship programme, the Late Late Show, to raise much-needed awareness for the Irish Cancer Society. By shaving her head she also raised no less than €500,000.