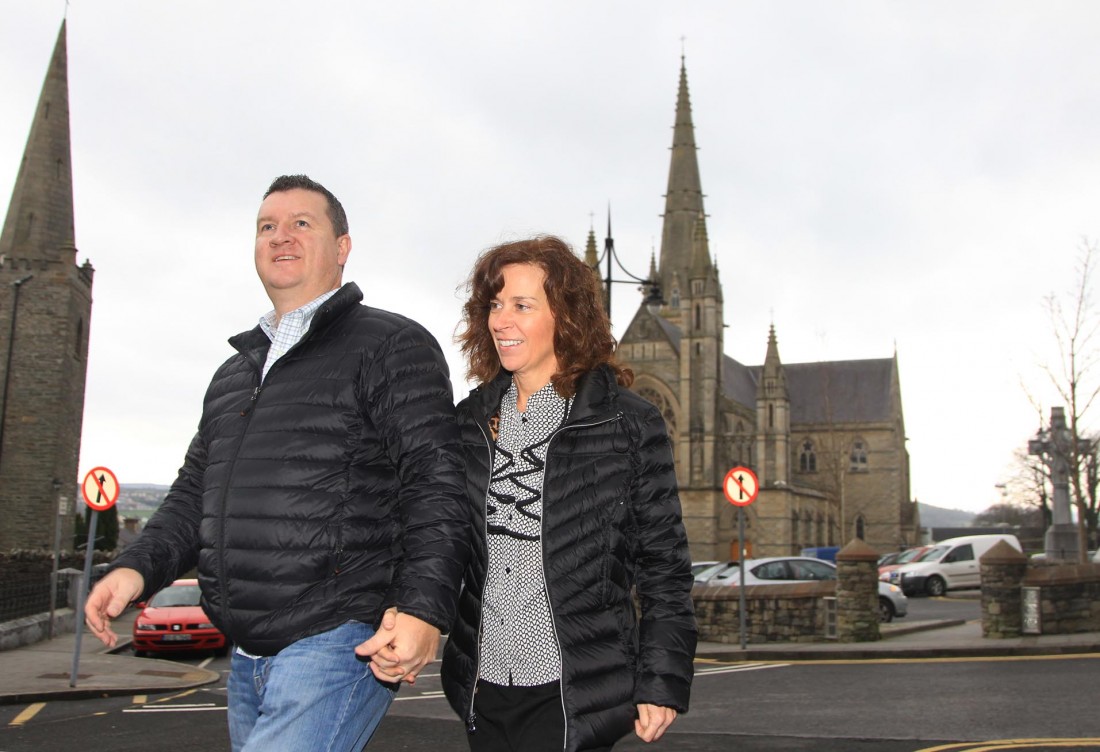 THOUSANDS of Irish undocumented living in America face another lonely Christmas thousands of miles away from home.

The sadness associated with being away from family at this time of the year is one which is familiar to many people here in Donegal.

Special events like weddings and christenings have to be viewed through computer screens and, unless a miracle of a green card arrives from Santa Claus, it’s something which will be repeated in 2014 and for years to come.
Steven McMenamin, 45, is from Letterkenny. He has been living in Boston for 27 years and hasn’t set foot on Irish soil in twenty-one years.

This year, however, it’s different. On August 14, 2013, he became a naturalised US citizen and last week he was back home in Letterkenny.

It’s not the same town that he left on St Patrick’s Day 1986 to go to the States for “two or three” months to earn a few pound.

Together with his friend Simon Francis, he arrived at JFK Airport not knowing anyone in America – a land which has since become home. He takes up the story.

“We were standing in JFK Airport when we saw this man holding a sign with our names on it. It was Ewen Campbell’s dad (John) and he took us to his home in Ridgefield Park, New Jersey,” he said.

Jersey would be their home for the next month or so before Steven’s sporting prowess attracted the attention of Glenswilly native John McDevitt.

A member of the Donegal Minor team which reached at All-Ireland semi final in 1985, Steven was also a talented soccer player who plied his trade with Bonagee United and Swilly Rovers and had trials with both Wolves and Manchester City.

“I went to Boston and John (McDevitt) was there to pick me up at Logan Airport. He also picked up Shay Hughes (Galway) the same day and we’ve remained good friends ever since,” he said.

There was no Donegal team in Boston at that time but a subsequent split in the Galway camp led to the establishment of two new teams, namely Notre Dame and Donegal, with Steven staying loyal to John McDevitt and playing for Notre Dame.

That team, which also included Rickey Rushe (Castlefin) and Tom McDonagh (Dungloe), would also go on and win the All-American title wearing the Tyrone colours!

Steven did return to Ireland in ‘87 to get his papers sorted to allow him to attend college Stateside and there followed two years in Florida before he moved to Stonehill College in Boston where he finished his degree in Accounting.

He went to work in an accountants office before completing a Masters in Finance at Suffolk University in Boston. Ultimately, he would end up buying the company he worked for – Injection Mouldings Plastic – which made parts for the automotive industry – in 2004, before selling it on three years later.

Today he works for a private equity firm in New York, Hall Capital, where he manages one of their companies. One of his work colleagues Susan, is now his wife of five years.

“Where did that time go,” he mused.

“It was my initial intention to go out to New York for two or three months and earn some money but one thing led to another and the rest, as they say, is history,” he said.

Letterkenny, in particular, and Ireland as a country is much changed from the place he left in the late 80s.

“On our way to Letterkenny we stopped off in Ardee and Susan asked me what Letterkenny was like. I explained that it was quite like Ardee but maybe a little bit bigger.
“As we drove in the dual carriageway I got quite a shock. It really is a city now and the town has expanded out into areas where we used to play football in fields. It now goes all the way out to O’Donnell Park, way out beyond Ashlawn where I used to live, Oldtown and Glencar. It’s scattered out all over the place,” he said.

He can remember a time when a country lane, overgrown with trees, was the entrance to Leckview Park – home to Letterkenny Rovers – when there was a nightclub attached to the Ballyraine Hotel (Mount Errigal Hotel) and when the Fiesta was home to the weekly roller disco.

As a teenager, Steven worked in the Ballyraine Hotel alongside many of his neighbours including this writer, Michael Bonner (RIP), Christy Bell, Simon Francis, Lynn Dobson, Shirley Moore and Amanda Ramsay.

“God, but things have changed since those days,” he sighed.

Steven lost his mother Norma in 1993 while, more recently, his only brother Adrian passed away in 2009. While he was home for his mother’s funeral (using a British passport to get back to the States) he was unable to make it home four years ago – something which broke his heart at the time.

“I had a two year time-frame after College before things became difficult and I was effectively stuck out in America.

“Since then I’ve only been able to travel within the United States but kept a handle on what was happening back home through phone calls and letters while family and friends also used to come out and visit.

“Mum and dad (Norman) came out to the States for my graduation while my sister Lisa was out five or six years in a row when she was younger. Adrian also came out to live in America, while dad has come out a few times in more recent years,” he said.

Members of the County Minor team Sean Reilly, Peter McIntyre, Paschal Cullen, Sean McBride and Tommy Ryan together with Andrew McGovern, Joe Boyle, Danny Doogan, Charlie Joe McGinley and Packie Dunnion who combined to form the backbone of the St Eunan’s College soccer squad, who enjoyed All-Ireland success in 1985, had a special reunion in the Brewery Bar last weekend.
They were joined by their teachers at that time, Eddie Harvey and Mickey Houston, for a night of reminiscences and banter with the odd lie thrown in for good measure.

“It was great to meet up with all the lads. It was like it was yesterday since we all played on the same team – not almost thirty years ago,” he said.

2015 represents the thirtieth anniversary of that All-Ireland Schools success and Steven has set himself a target of getting fit to play alongside his old team-mates on the College Park between now and then.

Before that, his niece Lauren makes her first holy communion next year and he’ll be home for that next May.

“I’ll never get back the years I have missed with family, but at least I can now come back to meet cousins, aunts and uncles at special occasions like weddings, christenings and of course Christmas,” he said.

“That said, if a young lad came up to me and asked me should they travel I would say yes.

“It really opens your eyes to what’s going on around the world. They get the opportunity to experience different people and cultures and to take on responsibility for yourself. You certainly learn a lot more than you would if sitting around the house, while you can still have fun doing it,” he laughed.