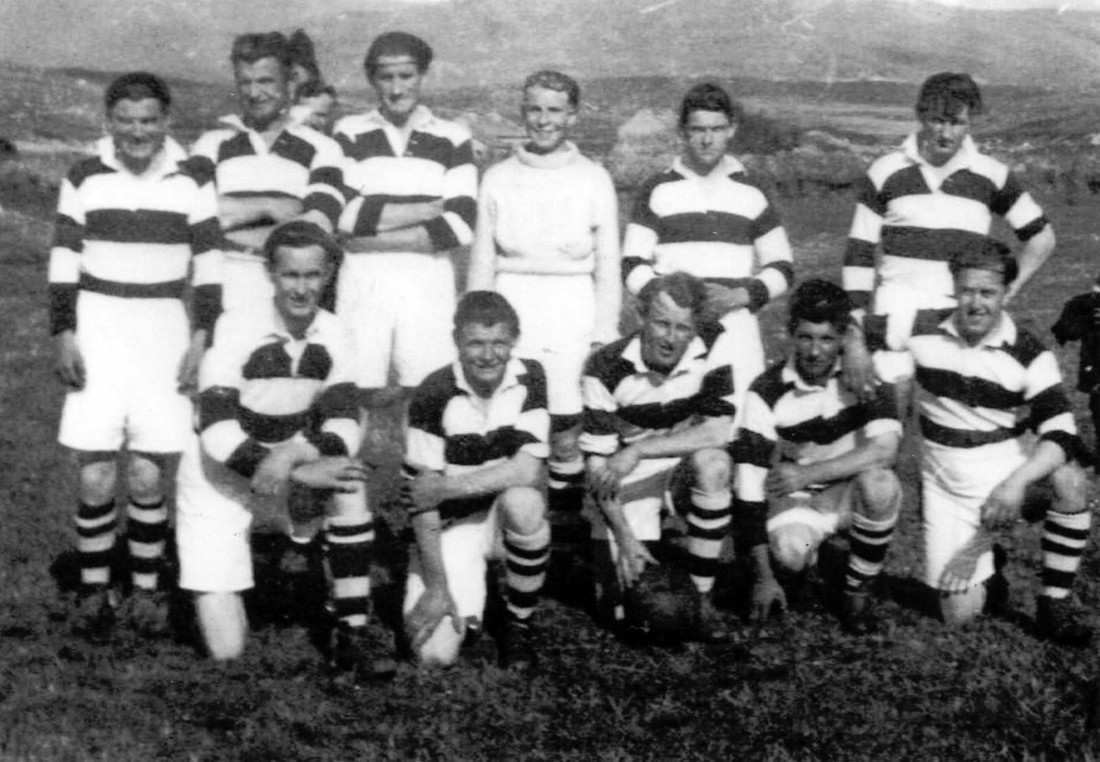 Dr. Paddy Ferry, a former Keadue Rovers player traces the history of the club and its successful league campaign of 1953

Sixty years ago, in the spring and early summer of 1953, organised Association League Football became a reality in Donegal for the first time. For over fifty years, since the end of the previous century, soccer had been played in the county.

However, the advent of the North-West Donegal League in 1953 was the first time a soccer league had been formed and Keadue Rovers became the first champions.

The Keadue club had been formed in 1896 and the townland of Keadue and its hinterland became one of the great centres of soccer in Donegal and it continues to be so. That early success of Keadue Rovers in 1953 was the beginning of a truly glorious history for the club with continued success in the 1950s, 60s, 70s 80s and 1990s.

Many teams appeared in the Rosses during the last decade of the 19th century. Young men had left their native soil to seek their livelihood in Scotland and help support their families at home. They witnessed the emerging game being played across the water and many of them developed strong allegiances to clubs with Irish connections – notably, Hibernian in Edinburgh and Celtic in Glasgow.

Upon their return, these seasonal emigrants brought their new experience to bear and soon soccer was being played in Donegal. Teams were formed in many villages and townlands and challenge matches between neighbouring teams became the order of the day.

Keadue Rovers played their first challenge match in early May, 1896, against Mullaghduff Celtic on Mullaghderg Banks. Keadue won by the only goal of the match scored by their centre forward, Manus Boner. Sadly, many of those early clubs have long since disappeared.
Keadue has continued, however, and the Rovers are now the oldest club in the county with an unbroken history and the club, probably, is one of the few in the whole country that can trace its origins back to the 19th century.

That whole period from the advent of soccer and the appearance of all those early teams until the formation of the first league in 1953 can, legitimately, be referred to as the era of the challenge match.

By the late 1940s and early 50s, the challenge matches that produced the greatest interest and generated the greatest excitement were those involving Keadue Rovers and teams from Arranmore Island. It was, however, a great period in general for association football in Donegal. Teams from the east of the county had also come to the fore – notably Swilly Rovers.

Through the work of John E Gallagher, Johnny J F O’Donnell and Pa O’Donnell,TD, Burtonport Sports Field had been redeveloped and opened in 1952 – giving the game fresh impetus. A Rosses man, Mick Gallagher from Arranmore had become Donegal’s greatest ambassador for the game and our first internationalist. Mick had left the island to play for Hibs in Scotland, winning Scottish League and Cup medals in the process.

In the autumn of 1952, some of the leading lights of the Keadue club – John Boyle, Patrick Gallagher, Pat Anthony Ward, John Patrick Sharkey and John Anne Ward decided that the time had come to introduce a formal league set-up to replace the old system of one-off challenge matches that had been the norm for so long.

They called a meeting with the representatives of some of the other clubs – St. Mary’s, Annagry, Arranmore Hibs, Arranmore Celtic, Dungloe and Glassagh. From that historic meeting, held in Pat Duffy’s chip-shop in Annagry, Donegal’s first league emerged, the North-West Donegal League.

Elected to the executive of the new league were; Con McFadden, Chairman, from Glassagh, John Anne Ward, Secretary from Keadue and Joe Boyle, Treasurer from Arranmore. The new Secretary’s first remit was to officially affiliate the new league with FAI headquarters at Merrion Square in Dublin. – which he duly did. His correspondence with the then FAI Secretary, Joe Wickham, still remains for those of us interested in the early history of league soccer in the county.

Contact was then made by the executive of the new league with the leading lights of the game in other parts of Donegal – men like Tommy Dorrian in Killybegs, Danny McNulty in Ballybofey, the McDaid brothers – Brendan and Eamonn in Ramelton, the Blake brothers in Letterkenny and Paddy Harte. As a result, regional leagues were also set up in the rest of the county and Paddy Harte was appointed County Secretary.

Among the other famous names who would figure in the new league set-up were the Blaney brothers, Neil and Harry with Fanad and Fran Fields – Lifford Celtic’s centre forward.

Keadue Rovers emerged as champions of the North-West – a fitting victory in many ways as the initiative leading to the advent of league soccer in Donegal had come originally from Keadue. The League was contested by six clubs; two from Arranmore, Hibs and Celtic, Glassagh, Dungloe, Annagry and Keadue. There were many memorable matches and many memorable performances.
1953 was truly a glorious year for Keadue.

One match now remained to be played. Moville Celtic had captured the North- East League title and they and Keadue Rovers were due to meet in what would effectively be the final of the Donegal League.

However, their match with Moville did not take place as planned. Keadue’s victory over Lifford was to be their last match of 1953. In the 1950s seasonal emigration was still a very important part of life in the Rosses. Virtually all of Keadue’s pool of players took part in the annual migration to the building sites, coal mines and farms of Britain. The final with Moville had, therefore, to be postponed. It was eventually played in April, 1954 and Moville finally brought Keadue’s great run to an end.

There were genuine stars in that historic first league winning Keadue Rovers. The Boyle brothers from Lower Keadue, John, Packadie and Anthony were a formidable footballing family. Anthony in particular, with his phenomenal goal scoring touch was regarded as a footballing great long, long, before his son – another Tony Boyle – helped silence the Dubs on Hill 16 that glorious and unforgettable Sunday in September 1992.

John Patrick Sharkey, the Rovers’ famous left winger had the ability to hit the back of opponents’ nets with Brazilian type rockets, from his left foot, long before the world had heard of Pele, Garrincha and the rest. And then there was Pat Anthony – Pat Ward.

While many people naturally regarded Mick Gallagher, Donegal’s first international, as the finest player ever produced by our county, the great Mick himself, magnanimous to a fault, always maintained that Pat, in fact, was Donegal’s greatest.

While the other Donegal regional leagues did not survive the 1950s, the North-West Donegal League did continue until 1970 and Keadue Rovers won additional championships in 1959, 1960 and 1963.

In 1971, however, a new Donegal League was formed which included teams from the whole county. By now Manus McCole, Keadue’s legendary manager and father of the modern Keadue Rovers, was in charge of the club. Manus adopted a youth policy that was to set a solid foundation that would guarantee Keadue continued success for years to come. Manus’s youth team won the Donegal Under 16 league in 1975 also captured the Ulster Under 16 title that year.

That talented group of young footballers, which included Packie Bonner, who would become one of the stars of Jack Charlton’s great Irish international side, formed the core of the Rovers side who won the Donegal League in season 1977-78.

Further Donegal League titles followed in seasons 1986-87 and 1987-88 followed by success in the new Premier League in seasons 1992-93 and 1993-94. As well as the league titles, the club also had multiple successes in cup competitions in the county including the IAWS Cup, the Area Shield, the Donegal Area Junior Cup, the Ulster Cup and the Sportsman Cup.