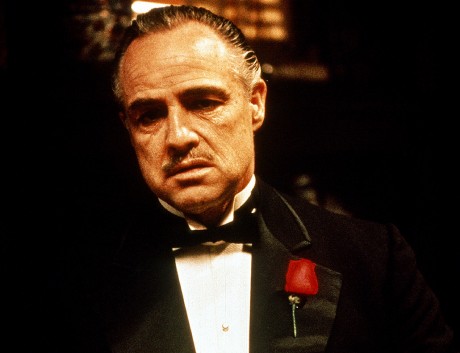 Francis Ford Coppolla’s The Godfather, starring Marlon Brando, was one of the top movies, but not amongst Darren’s favourites.

BY SEÁN P. FEENY
DARREN McQuaid (29) is originally from Falcarragh, but currently living in Thailand. Over the past year he reviewed the top 250 movies of all time, according to the Internet Movie Data Base (Imdb).

Darren is a former student of and then went on to do a BA (Hons) in Interactive Multimedia at IT Tralee in Kerry. We caught up with him this week.

Darren moved to Thailand for the first time three and a half years ago. “I had a good laugh teaching for a year and travelling about on the holidays. You get about two – one month off breaks a year. There’s so much to see here,tons of culture and festivals that you really have to see to believe.Great to travel too, meeting such a diverse crowd of people,some in passing and some you’ll have for life.”
By day Darren is an English teacher, but most of the time he said, ‘you’re more like an entertainer than a teacher’.

“You’re playing games and basically having the craic with the kids on a regular basis. You really build up a bond with them after a few months. Once I finished in Thailand I came back home for two years, there wasn’t much happening, no jobs not many prospects besides waiting the recession out on the dole so I decided to head back, and here i am.
Darren has always had a great interest in movies: “I did film study in college and had a pretty descent lecturer. I did a bit of analysis between books and films and adaptation and I think before I even started college I would consider myself a bit of a movie buff.

“In my early teens i had job in two of the video shops in Falcarragh and when you’re working an eight hour shift and you’ve watched all the mainstream stuff you start picking some of the obscure videos and DVDs and there were some great gems there that you’d discover just by chance.”

Darren is a would admit he’s a fan of list,top 100 songs, top selling records, but when he was talking film with some people he discovered that there was a lot he hadn’t heard of before. “So I found the list on IMDB and thought I’d watch it, even write stuff down so I’d remember it better.Then that was the blog. Now if someone says ‘hey this film is top 20 in the world I’ll remember it and say ‘nope it’s not even on the list’ or ‘more like 189 , bud’ .”

To watch the movies Darren set himself a time frame “A film a day Monday to Friday. So that 250 films divide by 5 = 50 weeks and maybe a few other posts thrown in too so I think a full year , all in all, it took me. I’d seen quite a few before, but O said in my first post I’d watched every single film again no matter what.There were some really good ones where I’d ‘poo-poo’d’ them as rubbish but on a re-watch they really turned me a round.There’s quite a few on there too that you really have to watch more than once to really pick up on the mise-en scene or sub text. All good stuff.That’s not to say there were some stinkers thrown in the mix too.”

Of course, Darren has his own opinions and there were so movies in the top ranks that he was not really into. “I can’t see the appeal of the Godfather, long winded stuff.There were way better mafia/gangster films in there. And then there are some really good new ones, Christopher Nolan has definitely come into his own in the last few years.

“Some nice original scripts that break the monotony of the Hollywood stuff. Things like Inception; Heavy on a first viewing but pretty good over all. Not without its plot holes, no doubt, but a lot of films have a few wee ones.
Here are some of Darren’s favourites. “I’ll name a few but I’ll try and stay away from the more obvious ones: 12 angry men- it’s an old courtroom drama but i think everyone should see this once. I first watched this when i was 13 and it blew me away, now some 17 years later it’s still a favourite. The Secret in Their eyes – now this is a dark one,not one for sitting in on a Friday night with the girlfriend but the story is really engaging and told very well.

“There’s twists and turns everywhere and had it not been on the list i doubt I’d have ever seen it. A streetcar named desire, A stellar performance by Brando in this one.So much raw emotion. It was a stage play written by Tennessee Williams (who , I juts read, choked on a bottle cap) for the stage. Brando does it justice, a powerful performance.
there’s quite a few cult films too that really go without saying like : Fight Club, Leon, American beauty. What surprised me was the amount of Anime on the list. Quite a few and the majority of them were from Studio Ghibli with their distinctive style.

If you would like to read Darren’s reviews log onto http://top250imdbfilms.wordpress.com/
Darren is next going to do another blog covering the movies of the 1980s!