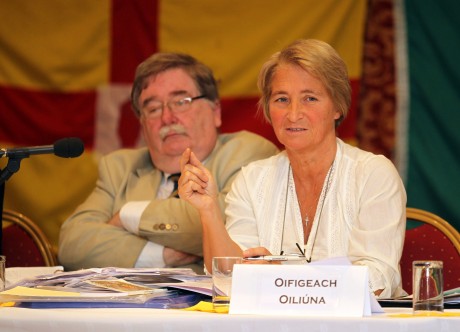 OUTGOING Donegal county board treasurer Grace Boyle departs on a largely positive footing with her accounts ahead of Sunday’s convention showing a neat profit for the year ending October 31.

The accounts show a trading profit of €234,739, but this would have been higher – up to €252,219 – only for the enforced inclusion of an ‘exceptional’ item. The item, some €17,480, is in respect of the loss of funds through the recent hacking of the Treasurer’s email account, which instructed a member of the Board’s administration team to transfer the sum of £15,000stg to a bank account in England at the beginning of August.

“There is no evidence to show that this can be recovered,” a note on the accounts says.

A Garda investigation into the matter is ongoing.

Team administration expenses dropped from €894,487 to €716,766, largely as a result of the exiting of the Donegal senior football team at the quarter-final stage, as opposed to the previous year when they were All-Ireland winners and last year’s accounts also provided for two team holidays – €30,000 for the 2012 jaunt to Florida and €175,000 for trip to Dubai in January 2013. Overnights and team holiday were dramatically down, from €286,083 to €111,496 in 2013. Player and executive tickets also showed a drop of around €14,000, also due to the team’s early exit from the All-Ireland race.

Adminstration expenses showed a brisk rise, with printing, stationary and advertising, postage and telephone, as well as meeting expenses all rising.

Ms. Boyle is stepping down from the Treasury, but has decided to throw her hat in the ring for one of the two Ulster Council Delegate positions. Former county chairman PJ McGowan is also in the running here, as are the sitting officers, Pat Connaghan and Brendan Kelly, in what promises to be the most intense vote on Sunday.

The big challenges for positions are for the seats of Vice Chairman, Treasurer, PRO and Ulster Council delegates. Denis Ellis and Dan Hartnett have publically confirmed their intentions to run for the Vice Chairman’s position.

Current Vice Chair Danny McNamee – a former county chairman and treasurer – has declared his interest in the Treasurer’s post and he will be up against Cieran Kelly, the St Naul’s clubman who is the current Chairman of Club Tír Chonaill.

Oisin Cannon (Letterkenny Gaels), who administrates the Donegal GAA Facebook and Twitter pages, will contest the PRO post with Killybegs’ Ed Byrne, who has previously served as the fixtures secretary.

The convention on Sunday will be held, for the first time in living memory, in the absence of the media. Earlier this week, the local media declined an invite because of a condition attached that would enable the Chairman to call a discussion ‘in-camera’ at any time, even retrospectively.