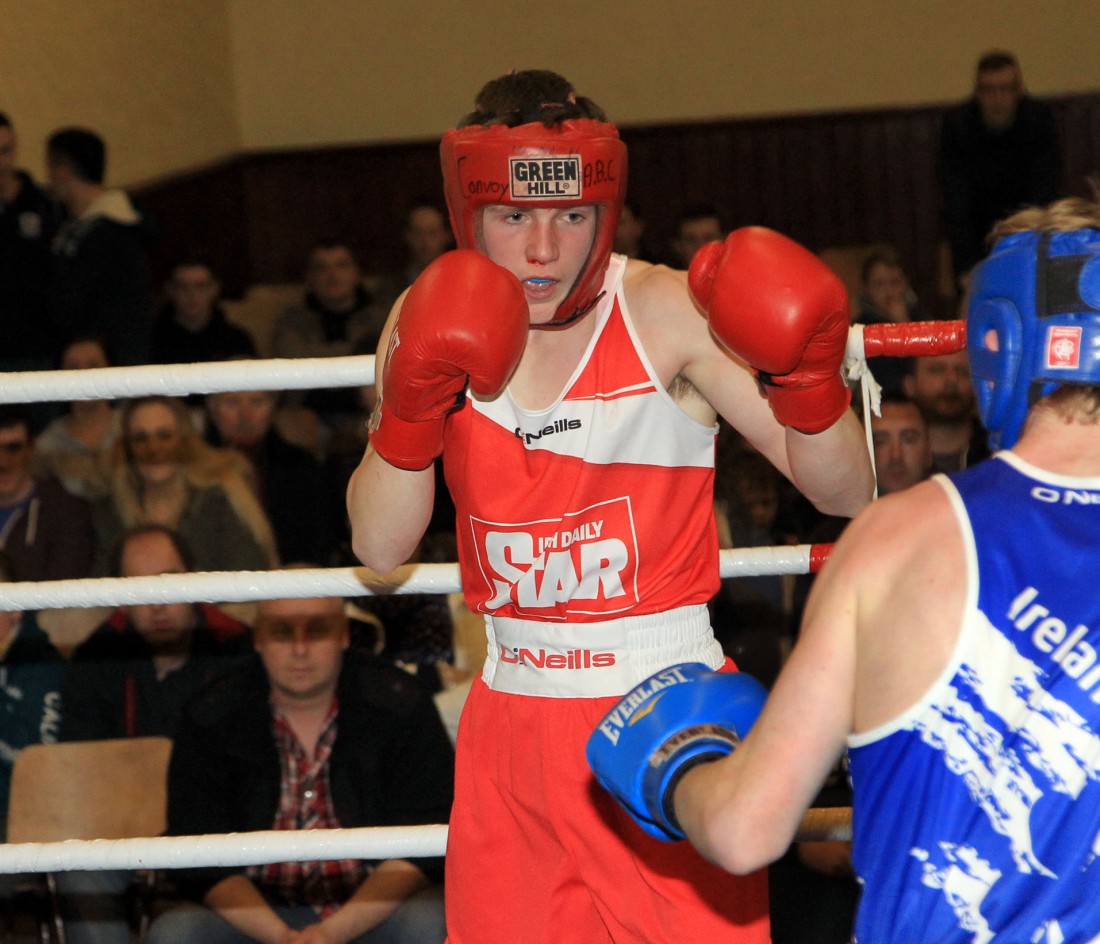 McNamee’s was the headline act at Convoy ABC’s annual tournament.

A muted silence descended over the packed St Mary’s Hall as the scores were totted, but McNamee won by virtue of a split decision.

Boxing perhaps a little too advanced in the initial exchanged, McNamee retreated and a fire-cracking end to the opening round saw him lead the way 29-28.

A brilliant reaction shot early in the second round was an outline of McNamee’s talents, the 17-year old ducking left before landing a sore right hander to his opponent. McCartan momentarily dropped to a knee in the second round and while he tried in vain to respond, McNamee’s concoction of blows was just too strong.

The Deele College student won Boy 2 50kg honours in 2012, defeating MJ Mongan in the final, and followed that up by defeating Darren Ward to take the Boy 3 57kgs title earlier this year.

A noted footballer and athlete, McNamee is no mean operator in the roped ring.

While McCartan clawed back to win the final round, McNamee still remain the clear winner last night, much to the delight of the home crowd.

Keenan Gibson is no stranger to the big stage either, the Convoy ABC man having contested a Schoolboy final in Dublin earlier this year.

Gibson had the upper hand on Letterkenny’s Patrick McConigley in a ferocious meeting in the Boy 4 66kgs class.

Gibson won the first round, but McConigley battled back to take the second and force a winner-takes-all third verse.

Neither boxer gave an inch, but it was Gibson who gritted the teeth and refused to blink in the tense final round to claim the split decision win.

One of the bouts of the tournament was that at Intermediate 81kgs where Letterkenny’s Liam Doherty defeated Twin Towns’ Kevin Maguire.

Doherty took the front foot from the outset of the contest having landed a sharp left. Doherty asserted his control on things and a swift left-right combo had him well in front when the bell went for the close of the first round.

Doherty’s precision and power, not to mention his ability to unleash a series of those lethal hooks had him well on top.

It was a similar story for the second round and another power-packed blow by Doherty led to referee Michael McDermott giving a count to Maguire. On the resumption, the Letterkenny man unloaded another volley and there appeared a danger that he could stop the bout at any time, the man in red just missing out on landing an upper right that was loaded with venom.

However, Maguire is built of stern stuff and the gutsy Twin Towns man threatened with some haymakers of his own during the third round, but Doherty had been utterly dominant in the opening two, the points for each showing him the 30-25 winner, and a unanimous winning of the contest was ensured when he took the third 30-27.

Doherty’s Letterkenny team-mate Michael Ward took a split decision win over Corey O’Kane in a well-matched Youth 1 63kgs bout, while the sparks flew in the meeting of two men who are becoming familiar opponents these days.

Just eight days after they traded leather at the Oakleaf ABC show in Derry, Convoy’s Ruaidhri McElhinney and Oakleaf’s Conor Long went at it again last night. Long took a unanimous decision last weekend and in last night’s contest he took the win in the second round, winning by a Tko.

The tension was wafer-thin between them following a rugged encounter the previous week and they were at it, hammer and tong, again in Convoy with McElhinney out to make amends. But he was assessed by the ringside medic early in the second round having shipped a heavy blow and, on the medic’s advice, referee James McCarron was forced to stop the contest.

Ronan O’Donnell bore the scars of battle following a bruising Boy 4 60kgs contest, but it was the hand of the Convoy man that was raised in triumph, as he took a hard-earned unanimous decision against Brendan Mullan of Bishop Kelly.

After a comfortable first round, Mullan blooded the Convoy man late in the second round, but the solace of the stool allowed him recover for the third instalment and O’Donnell was out with the guns blazing again over the last round, unfazed and went onto take an impressive win.

O’Donnell had plenty to spare in the first and third rounds, while the second round was just edged by the rugged Convoy man 29-28. The blood was dripping, but it had been worth it as he held sway.

The evening got underway with Carrigart’s Peter Curran defeating Convoy’s Jordan Gallagher, Curran forcing the referee to give Gallagher a count during the second round of a contest he won unanimously.

In an explosive Boy 2 42kgs bout, local boxer Ryan Ward-Mulrine had the edge on Dunree’s Gavin Kelly in each of the three rounds. Ward-Mulrine took a narrow 29-28 verdict in each stanza to take a unanimous decision.

With Ward-Mulrine on top for the most part, the Dunree man had to come with a big finish – and he did just that with a late rally, forcing the Convoy man onto the ropes in the closing seconds, but it wasn’t enough as the local man had done enough.

For the first time in ten years, the name of Lee Boyd was absent from the bill at the annual Convoy tournament. Boyd – the reigning Irish Colleges champion – has recently joined the Army. In the Convoy colours, Boyd won titles at Donegal, 9 Counties, Ulster and All-Ireland level.

The night ended on a winning note for the Convoy men, with Mark Laverty defeating ‘The Fighting Barman’ from Raphoe, Patrick Friel, on a majority decision. Friel was on top in the opening round, but Laverty bit back to take the win

The prizes on the night were presented by former Convoy ABC boxer Patrick Harkin, now based in County Cork.