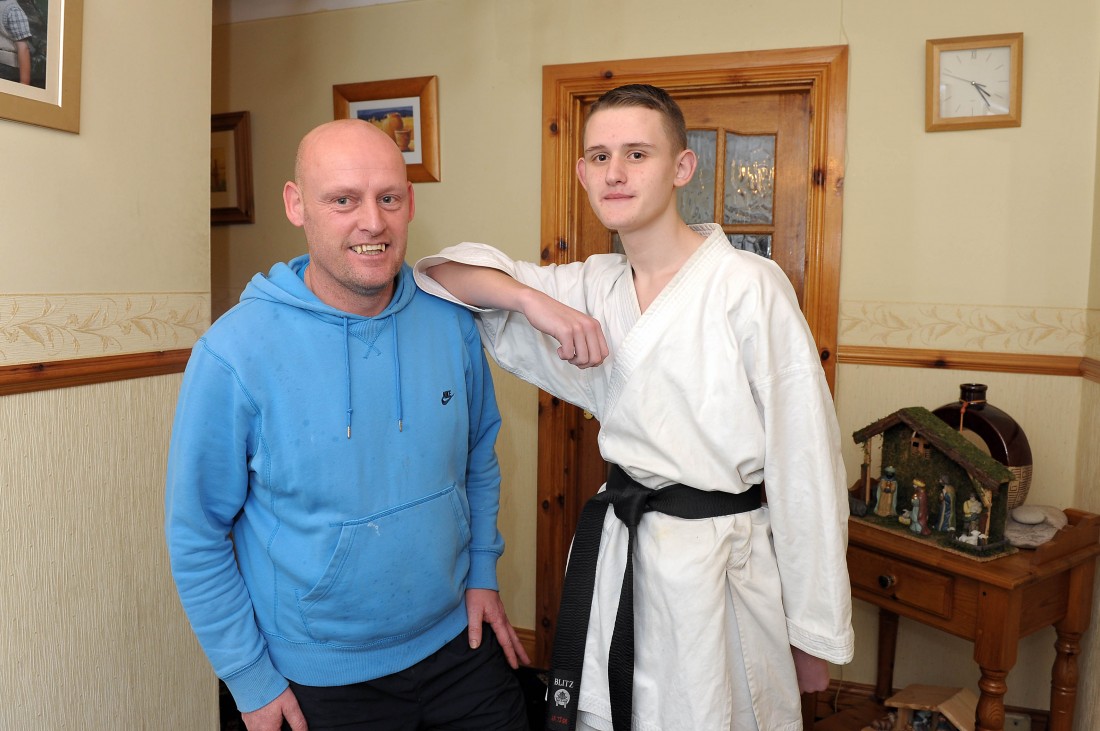 A teenager who has bravely fought his way back to fitness after serious illness was recently awarded a Black Belt in karate.

Photographs of Ryan Campbell (15) from Ballindrait, Lifford, with his award now proudly adorn the walls of Crumlin Hospital – acting as an inspiration for sick children.

Shortly after birth, Ryan was diagnosed with Biliary atresia, a chronic, progressive liver problem that affects many vital body functions. He underwent a major operation in Crumlin and weeks later he had to be flown back to Dublin by the Air Corps for a second emergency operation.

He’s been attending Crumlin and Letterkenny hospitals every year since and may, ultimately, require liver transplant surgery.

A third year student at Deele College, Ryan finished second at the Northern Ireland 14-16 Championships last month and has his sights on winning the title next time around.

“Now that I’ve managed to get the black belt I want to keep going. I’m learning all the time and want to keep improving. I’m at the sport six years now and really love it,” he said.

His father John is immensely proud of his son’s achievement.

“There was some concern when he first started the karate as he’s a big scar on his stomach but his consultant in Dublin gave him the go ahead and asked that he send them on a photo of the black belt whenever he got that far.

“I’m not sure they really believed that he would do so well but they were all delighted when we were able to send them on a photograph of Ryan with his black belt.

“That picture now proudly hangs up on the wall in the hospital and is a reminder to parents and children with the same condition how bright the future really can be,” he said.

Ryan also played a bit of GAA for the local club but it’s the karate is his first love. He has an older brother Ciaran (17) and younger brother Adam (9).
“When Dr Broderick (his consultant) saw the photograph she nearly cried. We’re all really pleased with how well he’s getting on and, hopefully, he will never need a liver transplant and could be one of the lucky ones,” he said.

“He’s an exceptional young man who has come on leaps and bounds and who fully deserved his black belt earlier this year. He has shown a remarkable strength of spirit and ability to bounce back in the face of adversity.

“He working extremely hard to force his way into the Northern Ireland squad for the British Championships in Birmingham and deserves everything that comes his way. He trains at least three times a week with us and he’s a great ambassador to all children who’ve suffered illness in their young lives,” he said.