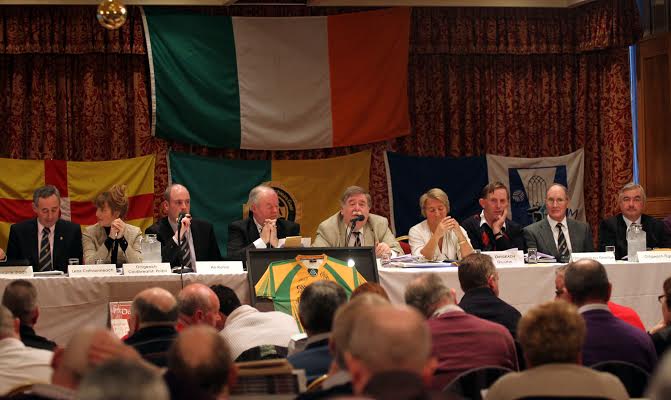 THERE was something deeply unsettling about the events in Donegal earlier this week that have resulted in the local media taking the united decision to decline an invite to attend this Sunday’s GAA convention in Letterkenny.

For the first time in living memory there will be no media present at convention due to an archaic condition which the county board attempted to impose on the fourth estate: “An Cathaoirleach can call at any time, or during any part of the meeting, that the meeting is going in camera, either in advance or retrospectively.”

It wasn’t, as the final line of the email had ‘trusted’, to our satisfaction.

It is a condition that is both unreasonable and unworkable.

It is, of course, the perogative of any chairman at any meeting to have certain, delicate matters discussed ‘in camera’. The suggestion that this can and should be done in retrospect is as absurd as it is dangerous.

What, for instance, would be the procedure for broadcast journalists who might have found themselves giving an audio report during a discussion only to be told some time later that the matter was, in fact, ‘in camera’?

A statement from the National Union of Journalists (NUJ) explained: “Just as you cannot go ‘off the record’ retrospectively, the Chair has no right to go ‘in camera’ retrospectively.”

Two years ago next week, North Korean leader Kim Jong-il died. He died on December 17th, but the news was not made public until December 19th when the Korean Central News Agency made the announcement to the nation.

Remarkably, in this age of instant news, his death was not reported until 51 hours after his passing – until the official stories were agreed upon.

In North Korea, the public is limited to a heavily monitored and censored network with no connections to the outside world. All media is owned and controlled by the government, television sets are pre-set to receive only the government frequencies and internet access is illegal.

The condition laid down in the invite in Donegal amounts to a sort of censorship that is not entirely out of alignment with the daily working of journalists at KCNA.

A discussion suddenly veers in a way that is unkind to the Association and ‘in camera’ is called. The journalist must down the pen, delete what he has written and begin again with the canvas blank.

Sunday’s convention will have many difficult and, at times, uncomfortable questions aired, but it is surely the right of the average Gaelic Games follower to know what is happening within the organisation. Yet, the head-in-the-sand approach is the default setting when these things come around.

Tellingly, in the 64-page booklet for convention, which contains the annual reports of the relevant officers, there is no mention of several important items from 2013: The events in Omagh when the 2012 Footballer of the Year, Karl Lacey, was allegedly spat upon; the ‘bitegate’ incident involving Patrick McBrearty during a League game against Dublin; nor the breakup of the senior football team’s management are covered.

The membership of Donegal GAA stood at an unprecedented high level in 2013, with 21,692 members.

In his report to convention the county secretary Aodh Máirtín Ó Fearraigh – a working journalist at RTE Raidio na Gaeltachta – touched on the difficulty with the message going back to grassroots GAA members at clubs.

He wrote: “Around three quarters of our affiliated clubs regularly attend these meetings, but the attendance record for the remaining clubs is quite poor. This has led to a breakdown in communications many times throughout the year and going forward clubs need to ensure that their delegates attend County Committee meetings and report back to their clubs on matters discussed at these meetings.”

It was a function that, once upon a time, until earlier this year, the media had provided with balanced reports on the items at the monthly sittings of the county committee.

An impasse was reached after a member of the Executive attempted to place a discussion at the May county committee meeting ‘in camera’ as it was ongoing. The earlier part of the discussion – Jim McGuinness’s address to the meeting – had passed and the media’s reportage had been submitted to the relevant sports desks.

Radio reports are instant and cannot be hauled back retrospectively. The same is true of posts on social media – while they can be deleted, they will have been there for public consumption until removed by the author.

The modern media is now a ‘live’ body in that much of its work is no longer filed post-event. It is an age of instant news and the new media of Twitter, Facebook et al.

When the ostracised Donegal press corps was invited back into county committee during the summer, it was with three conditions, one of them that outlawed  the use of social media. This, by the way, in a room where information from delegates often reached external bodies who would tweet before journalists.

There are 181 delegates eligible to vote at Sunday’s Convention.

When you throw in the attendance of other individuals who have been nominated for places on the executive and the few members of the GAA public who attend as a matter of form there will be roughly 200 people present on Sunday afternoon. The chances what happens there being tweeted instantly are somewhere between remote and impossible.

Are we entering an age where delegates will be asked to place electronic devices in a container before being admitted to meetings?

This whole saga is also unfortunate on the poor souls who have put their names forward for election to high office and who will now be denied the chance to have their views aired in public.

The appeal of Gaelic Games is recognised by the media, whose coverage of all aspects of the Association, however delicate they may have become, has been both unbiased and fair and that coverage goes well beyond the Donegal senior football team, its flagship entity.

The relationship was once a hamonious and mutually-beneficial one. It was a quid pro quo arrangement, one that is now in real jeopardy.

Once, this was a two-way street.

This week, we indicated only to find a notable sign stopping us in our tracks: The red circle with the horizontal white bar.

More’s the pity – for all concerned.