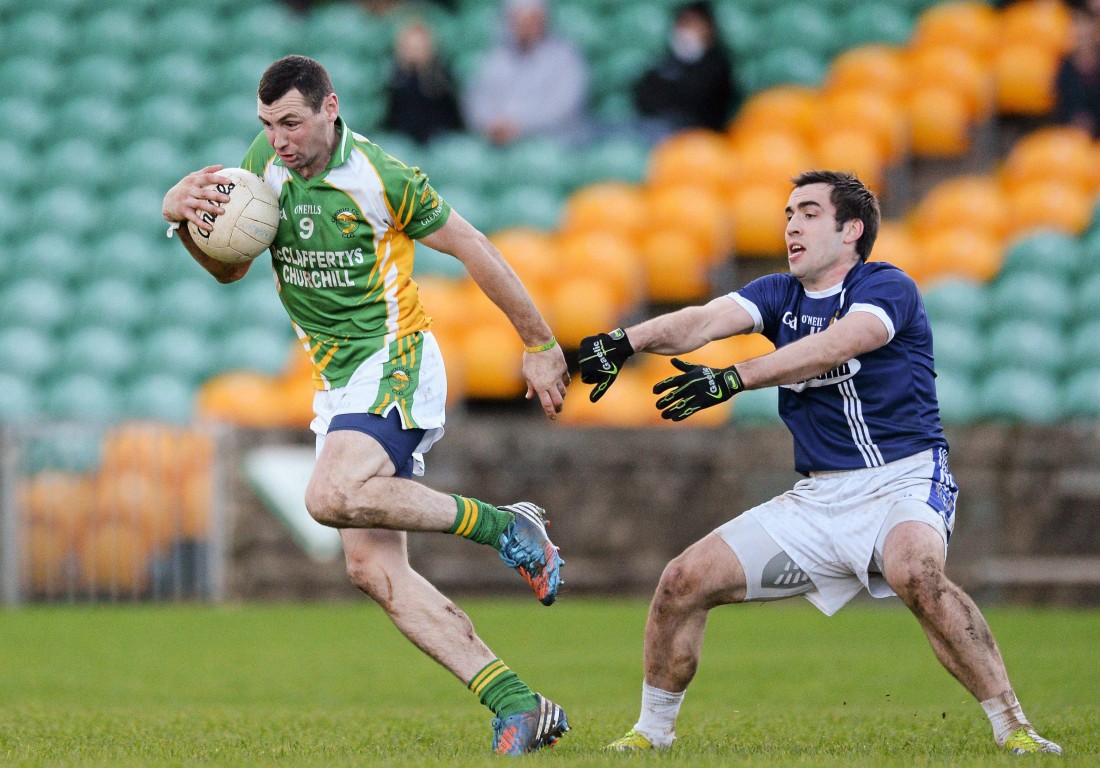 Ciaran Bonner will be a key man for Glenswilly on Sunday.

Ryan Bell is Ballinderry’s dangerman, and it is likely that Eamon Ward will be tasked with following him around Healy Park. Bell was a minor last year, but has progressed quickly to the senior ranks and represented Derry in their three Championship games this year.
Ward has become an integral part of the Glenswilly team since his arrival from Clontibret, and he is Glenswilly’s specialised man-marker. He has curtailed the influence of several highly rated forwards in the championship already this year including Colm McFadden, Paddy McBrearty and  Seamus Quigley.
Bell may drift in and out of the full-forward line, and that will suit Ward who is comfortable out the field. If Ward wins his duel with Bell, Glenswilly will have a great chance.

Neil Gallagher has been instrumental in Glenswilly’s success over the last two years, and he is pivotal to Glenswilly’s chances again on Sunday.
His dominance of the midfield exchanges has been critcial this year, and Glenswilly will need a big performance form Gallagher if they are to win. He is excellent at supplying quality ball to the full-forward line, while he is always good for a score when Glenswilly need one.
Conway is an experienced player, and played for Derry for a number of years. Ballinderry will have selected Gallagher as a player they will have to shut down, and Conway will attempt to stop the All Star from winning clean possession in midfield.

Michael Murphy is Glenswilly’s main attacking threat, and he has shown in the past that he comes alive on the big day.
If we think back to Glenswilly’s first championship final win in 2011, and Donegal’s win over Derry in the Ulster final the same year, as well as last year’s All-Ireland final, we begin to see a trend develop of Murphy excelling when it really matters.
Gareth McKinless has marked Derry’s Eoin Bradley and Brendan Heron during the championship, and he is likely to shadow Murphy. McKinless is a capable defender and he should be well supported in his task.
If the Donegal captain hits form, Glenswilly will fancy their chances of lifting the Seamus McFerran Cup.

Kevin McGuckin has been cleared to play in the final after having his semi-final red card rescinded, and that is a big boost to Ballinderry.
McGuckin brings a wealth of experience to the Ballinderry team, and he is enjoying a renaissance in midfield in the twilight of his career, after soldiering in the full-back line for the majority of his career.
Ciaran Bonner has produced some of his best football for Glenswilly this year, and he has earned himself a call-up to the Donegal senior panel again.
Bonner has a great engine, and he will look to test out McGuckin’s ageing legs when they face off in the final.

Brian McDaid is Glenswilly’s tenacious corner back and he has had a magnificent season to date for Glenswilly.
He is likely to mark Conleith Gilligan, who is one of the most talented forwards in club  football. Gilligan will look to bestow his craft on the final, and he is the man that makes Ballinderry tick.
McDaid, known affectionately as ‘Shorty’, will have his hands full with Gilligan, and he will know the dangers of letting the former Derry footaller have to much space. If McDaid can get on top, Ballinderry will struggle without their main playmaker.

The battle on the sideline could be as important as any on the field. So far, Gary McDaid has got his tactics spot on for Glenswilly, and he will have his team meticulously prepared for the game.
McKinless is in his fifth year as Ballinderry boss and has guided them to three Derry Championships in a row.
Team selection, match-ups and substitutions will all have a big impact on the match, and both managers will have big calls to make if they want to see their side win the Ulster Club Championship.