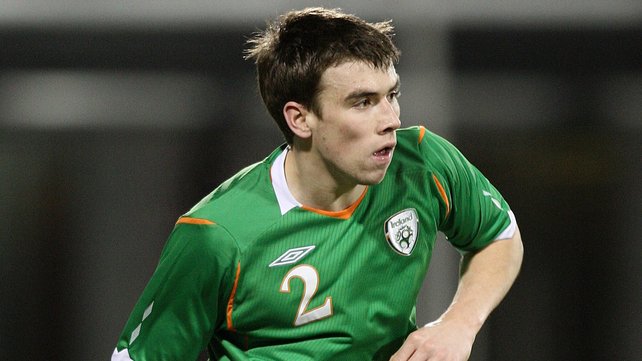 Growing up in Killybegs, Coleman had posters of the colourful Corkman on his wall. The often controversial Keane was installed as the assistant manager to new Republic of Ireland manager Martin O’Neill last week and the Boys in Green face their first test under the new regime tonight when they take on Latvia in a friendly at the Aviva Stadium.

Keane’s installation has created a furore never before seen for the appointment of a number two. Coleman has always been fascinated and inspired by Keane the player – and the 25-year old is excited by the prospect of being in a working environment with Keane.

Coleman can remember the big nights and big games Keane had at United.

“I think everyone will probably remember his (Champions League in 1999) game against Juventus where he got the yellow card and he dragged them through to the final,” Coleman said.

“I suppose that’s one that stands out, but nearly every game he played, he was brilliant, wasn’t he? It’s just great to have someone like that we can learn from.

“I think everyone is excited. Everyone knows about Roy who was a fantastic player and someone we can all learn from, and Martin has been a fantastic manager so it’s a brilliant appointment for Ireland. It’s up to us now on the pitch to impress them.”

New manager and new assistant have both said that their sole aim in the next couple of years will be to qualify Ireland for the European Championship finals in 2016.

On Tuesday, Ireland face Poland in another friendly, in Poznan, with their first competitive outing under O’Neill and Keane not coming until next September when the Euro qualifiers get underway.

Coleman said: “There’s no games for quite a while so it’s up to us in this short period, if we get selected for the games, to do as well as we can. Then when we go back to our clubs we’ve got to play well because I’m sure they will be watching most club games. It’s up to us to do as best we can.

“The European Championships qualifying campaign feel like a long way away but that’s what we’re aiming for now. All these friendlies are important for us to show the manager what we can do and for him to show us the way he wants us to play. That’s the long-term aim.”

A lot has been made of Keane’s dark side this week. A player who didn’t play in the World Cup after leaving Saipan in 2002 was always going to create a media circus, but Coleman hopes that those eyes don’t narrow in his direction in the manner Sir Alex Ferguson wrote in his autobiography: “His eyes started to narrow, almost to wee black beads. It was frightening to watch, and I’m from Glasgow.”

Coleman said: “I haven’t seen that side of him yet.

“Hopefully I will never be on the receiving end.

“As players, you know when you have done wrong and if I have done something wrong and a manager has a go at me, I’ll take it on the chin because I think it’s good that they have pointed out that you have made a mistake. I think it will be no different under these two managers.”

Tonight’s game is likely to be close to a sell-out with interest heightening following the appointment of the new managerial team.

Coleman will win his 20th cap against Latvia. He had a few moments as captain in the May friendly against England towards the end of the game in Wembley, but he described as the best moment of his career getting to lead Ireland out for last month’s World Cup qualifier against Germany in Cologne having been handed the captaincy by caretaker manager Noel King.

Coleman said: “It was a massive honour for me, something you always want to do as a kid and thankfully I got to do it. I really enjoyed it but I’m just looking forward to getting playing again. Robbie will be about for a while. He’s still scoring goals and he’s someone we need. We’ll see what the new managers think.

“I’ve been around quite a while. My caps probably haven’t shown that but I’ve been in the squad for about four years. I’m very comfortable with everyone but when I get on the pitch I just treat it like it’s my first cap. I’m really enjoying it and hopefully we can have a successful time.”