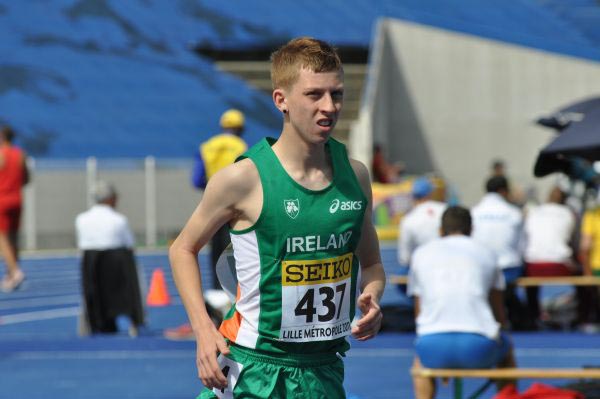 The Letterkenny AC athlete has battled back from injury this year, and he impressed in Santry sitting comfortably in third place, before overtaking Kevin Mulcaire and almost catching eventual winner Sean Tobin of Clonmel Athletic.

Finnegan says that he was satisfied with how the race developed, and he is now looking forward to testing himself against the finest young athletes in the continent.

“I was happy with how last weekend went,” said Finnegan. “I hadn’t done any demanding training in the lead-up to the event, so I wasn’t sure how the race would go or where I would finish.

“I started off pretty reserved and set up in third position. After every lap, I upped the pace a little bit, and I eventually caught Kevin who was in second with about 300 or 400 metres to go.

“I was catching the winner, Sean Tobin, too, but he held on to beat me by four seconds. I’d be happy enough with my performance. There’s definitely room to improve – I know I have a few seconds to drop before the European Championships.”

Tobin and Finnegan will both don the Ireland colours in Serbia, but they will be hoping to outgun each other once again. The pair are big rivals, and although they are pals, their friendship is soon forgotten about when they line up for a race.

“Myself and Sean have come up through the ranks together. We’ve had a big rivalry since we were under 12 on the track and at cross country. He usually wins the cross country, but it’s a lot closer on the track.

“We push each other on. We get on fairly well together on trips away together with Ireland and have shared hotel rooms on some of those trips. We’d be friends off the track, but on the track it’s a different story.”

Finnegan was in Rieti, Italy earlier in this year for the European Track and Field junior championships, but the Ireland team failed to pick up a medal. He hopes that they will have better luck in Belgrade.

“We have a strong team and I think we will be in contention. Sometimes when Irish teams go to European championships, winning a medal is completely out of the question, but we have good individual athletes, so I see no reason why we won’t be contesting for medals.”

The young Letterkenny men missed last year’s cross country season after he picked up an injury. But he has worked hard on his rehabilitation, and he is now getting back to his best.

“I was out for four months between last November and February and missed the cross country season. I had tendinopathy, which affected my thigh and knee. It’s one of those injuries that doesn’t just heal itself and I had to be in the gym everyday for four months doing rehab. I also had to travel to Dublin once a week for physiotherapy.

“I had great support from everyone and thankfully I’ve had no ill-effects since February. Fingers crossed I’ll not have an issue with it again.”

Finnegan is an articulate and confident  man and he has recently started a Law course in UCD, which bases him in the Capital during the week.

He is unable to train with Letterkenny, but he still follows his coach’s (Teresa McDaid) programme meticulously.

“I’m still with Letterkenny AC, but I train up here during the week. The UCD team go out on Tuesdays and Thursdays, and Gerry Kiernan takes a group out too, so I can jump in between both camps. Teresa has me on a strict programme, which keeps me ticking over during the week.”

The 19 year-old has had a very successful junior career, but he will move up to the senior grade at the start of 2014.

“This is my last year of juniors, and I’m building towards the senior ranks now. After Christmas, I will be a senior athlete, so I hope to continue to progress and make it to European and World championships.

“It shouldn’t be a major change for me. I would have come up against senior athletes on the track in time-based races, so it’s not like I haven’t experienced it before.

“It’s nice to make the European championships for cross country. But if I didn’t make it, I wouldn’t have been overly disappointed, because I have my eyes on bigger things. I would prefer the track and indoor competitions, and feel I’m more suited to them.

“In saying that, Belgrade is another step on the road for me, and I’ll be going there to perform to the best of my ability.”