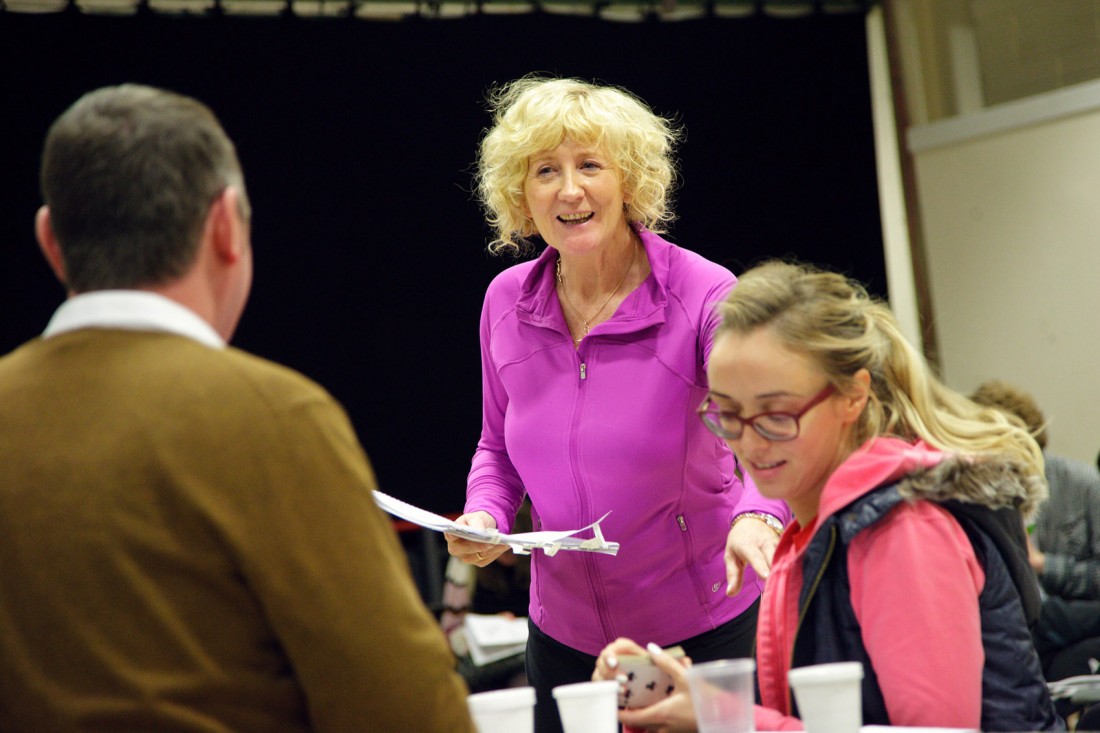 BY SEÁN P. FEENY
THIRTEEN years since its first performance at An Grianán, Leslie Long and Kathleen Ruddy’s musical, Caisleáin Óir, is back at the Letterkenny theatre this week.
Caisleáin Óir – The Musical began its journey in 1998, when Leslie Long completed the first drafts of the script based on Seamus Ó Grianna’s well known novel, and with a couple of songs written, encouraged Kathleen Ruddy to come on board.

At that time, Kathleen was producing and directing youth musicals in Letterkenny with The Rainbow Theatre Group and they had worked together on several productions.
During the following two years they collaborated on scripts, music, and arrangements of the songs and instrumentals, to complete the final piece.

Caisleáin Óir – The Musical premiered in An Grianán Theatre, Letterkenny in September 2000, and was such a success that a second run was arranged in April 2001.
The director of those first productions was Phil Dalton, a very popular Letterkenny-based teacher (now retired) who had who had created, directed and choreographed many productions in the North West.

This is Phil’s fourth time in the director’s chair for the production of Caisleáin Óir having first directed the musical with a youth cast in 2000. “That first cast took fantastic ownership of the musical.
“I remember the first day it was performed for national school and junior students we didn’t have many tickets sold, but by the next day the shows were sold out, that’s how quickly word of mouth had spread.”

In 2005 the show was first produced with a full adult cast and the musical went on to win the Spirit of Association of Irish Musical Societies (AIMS) Adjudicator’s Special Award in the Sullivan category at the AIMS Annual Awards Ceremony in Killarney on June 17, 2006.
Phil said: “We were approached by An Grianán to produce Caisleáin Óir as the theatre’s main piece for the year of The Gathering and this time around we again have cast member aged from seven years old, right up to 70, including the orchestra, from all over the county.”

Speaking on Friday, ahead of yesterday’s final tech rehearsal for the cast and crew, the director said that rehearsals for the production have been ‘fabulous’.
Besides new talent such as Catriona Doherty from Carndonagh and Chris McLaughlin from Ballybofey in the lead roles, Phil said there are also some ‘old’ familiar faces.

She said: “We also have John Ruddy, who is making his third appearance in Caisleáin Óir. John was with us as a child in the first production and then when on to be in the chorus for the next, and now he is taking on one of the lead roles in the musical.”

Phil said there is also a lot of new, young talent coming through in this production. “I’ve always said, Letterkenny has huge talent. I came to here to Letterkenny as a PE teacher and had a background in contemporary dance and did a lot of school productions and from day one the young people just grabbed any opportunity they could,” she said.

Although the musical has been performed at the theatre a few times since its premiere at An Grianán back in 2003, Phil said Caisleáin Óir will still be very fresh to anyone who has seen it.
“A new cast allows you to look at scenes in a different way, even the sound of a voice can make a difference and you are able to change things around.
“I have already been approached by a number of people on the streets over the past few weeks who have said they can’t wait to see the musical again,” she said.
Phil paid tribute to the musical’s music, composed by Leslie Long. “The music is absolutely beautiful. Last Sunday when we had a full rehearsal with the orchestra and it sounded incredible.

“During the week we had a rehearsal without the orchestra and the rehearsal felt flat, that’s how much of a difference the music makes,” she said.
Another element that makes it such an impressive production is the wardrobe and Phil said Mary Kelly has done a ‘huge job’ authentically dressing 60 cast members.
There has been a large number of people involved in the productions of Caisleáin Óir since its first inception and a lot of former cast members are coming to see the show this week.

Phi said: “I think there is quite a number of former members coming on the Saturday night and some of them are even flying in from abroad for it so it really will be a gathering.”

The director hope is that the musical will be performed by other musical societies and professional companies, domestic and abroad, in the near future.
“The musical is that good, it should travel around Ireland, or to Scotland and America; it’s definitely good enough for that. But in the meantime, I know that the cast of this week’s production will do us all very proud,” said Phil.

Based on Donegal author Seamus Ó Grianna’s well known novel, this large scale musical adaptation features a cast of 60 performers. At the centre of Caisleáin ÓIr (‘golden castles’) is the love story of childhood sweethearts Séimí Gallagher and Babaí Mháirtín Friel and what happens to them when poverty forces Séimi to emigrate to America. Through music, dance and song, we see the life of Donegal people at the end of the 19th and early 20th century. Hardships, eviction and emigration contrast with joyous moments of playing on the beach, fair days, dances, cards and céilís.

Caisleáin Óir is on at An Grianán Theatre from Tuesday, 12th to Saturday, November 16 at 8pm and is suitable for family audiences. There will also be a matinee performance at 2.30pm on the Saturday. See www.angrianan.com for further information or call the box office on 074 912 0777.