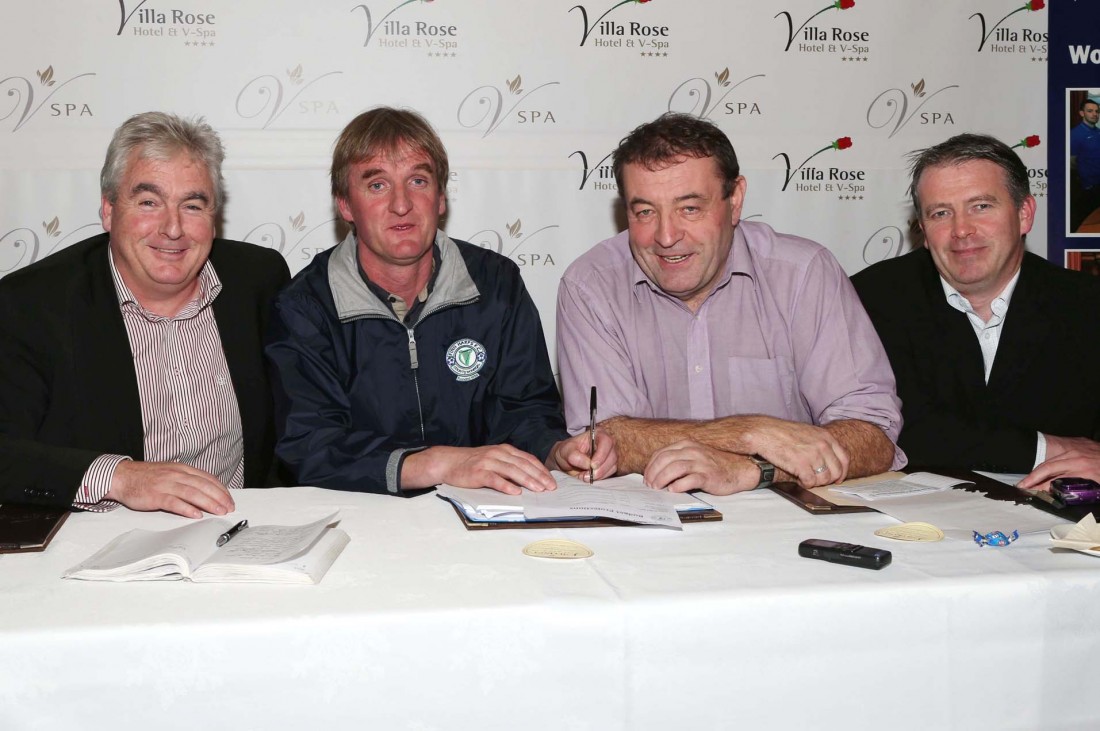 IT wasn’t until the last possible moment that Ollie Horgan’s name came up in relation to the manager’s job at Finn Harps.

There had been, we were told, twelve people in the mix, then it was ten and, finally, it was whittled down to five by last weekend, with Joe Boyle as the favourite to succeed Peter Hutton.

Then, from nowhere it seemed, former Fanad United player and manager Ollie Horgan was to be unveiled as the new Finn Harps manager at a press conference on Tuesday night.

Not once had his name appeared as a possible contender – a credit to the Harps selection committee and surely a first for Harps when compared to when previous managerial searches have been ongoing.

Ollie, we’re told, delivered a richly impressive interview and had ‘shot the lights out’ to ‘romp home’ when the votes were tallied at the Monday night Board meeting which rubber-stamped his appointment.

One of the interview panel, Aidan Campbell, said that Ollie’s ideas for taking the club forward are ‘very exciting’ describing him as a ‘very passionate man’ and saying he left the selection committee ‘excited by the prospects for the new season’.

I have known Ollie Horgan for a long time, ever since his early playing days at Fanad United many moons ago, but knowing him that well on a personal basis, or not as it may be, rightly or wrongly, doesn’t prevent people from forming opinions.

Ollie Horgan was a no-nonsense footballer who was fully committed and not short on ability.

Perhaps ‘a players’ player’ is the best way to describe him.

His appointment as the Fanad United manager raised eyebrows at the time. Succeeding Eamon McConigley was never going to be easy, given his success as the previous Fanad manager. However, Ollie set the bar high in what he wanted to achieve and three Ulster Senior League titles followed. His ability as a manager has been recognised at international level where he takes charge of the Republic of Ireland Schoolboy teams.

One other string to Ollie’s bow that has always impressed me is that Ollie Horgan says what he thinks and I have yet to hear him give an interview which could be described as evasive or cliched. Ollie shoots from the hip. If a player deserves praise then he gives praise; if he deserves chastised then Ollie will oblige.

Horgan has applied for a got a job that is sure to present him with many challenges in the months and maybe years ahead.

We know where Finn Harps are at financially – and it isn’t in a good place.

Has the new manager promised to field an all-local team which will keep costs down but will make competing for honours more difficult.

Finn Harps supporters, as has been proved in the past, are no different to any other group in football: If the team is winning they will be keen to go out to watch them; but they won’t go to Finn Park to see the team beaten every other week.

Ollie Horgan, you may say, in terms of the race to become the next Finn Harps manager, came, if not quite from nowhere, then certainly up on the blindside.

As a player and a manager he has always given his all – managing Finn Harps and all that goes with it will undoubtedly be his biggest challenge yet. I’m sure that no-one will have to tell him that football boils down to one thing and one thing only – results.

Win and you’re everybody’s favourite; lose and the knives will soon be out.

Good luck with it, Ollie.

IN the last few years Glenswilly GAA club has enjoyed some great moments. They have won two county championships, have All-Ireland winners and All-Stars in their midst and one of them, Michael Murphy, is captain of Donegal and Ireland.
This Sunday in Healy Park, they are provided with the opportunity to record the club’s greatest moment so far in its short 31-year history. To see Glenswilly face up to Derry champions Ballinderry in the Ulster senior club final is, without doubt, the stuff dreams are made of.
Some of the Glenswilly players go as far back as to junior football and are now playing at the highest senior level possible in club football in Ulster.
Some have played in Division 4 of the Donegal All-County League and on Sunday will run out to Healy Park in the Glenswilly colours for the Ulster final.
It is, perhaps, easy enough to say that Ballinderry, the Derry champions for the last three years, are the favourites to win, but it is a long time since they won an Ulster title. In this campaign they have been impressive in beating Clonoe, Scotstown and Kilcoo, a tough road that has been impressively negotiated by the Derry side.
Glenswilly’s path to the Ulster final has been a little easier, but wins over St Gall’s and Roslea leaves them on the brink of history.
Not since 1975 when St Joseph’s became the first Donegal side to win it has another team from this county taken the title. In fact, only Killybegs in 1991 and Naomh Conaill in 2010 have managed to make it to the final. No doubt Ballinderry will present a formidable challenge for Glenswilly, nor is there any  doubt that Gary McDaid’s men will bring their best game to Healy Park. Having played the semi-final there and trained at the venue last Sunday morning they will be comfortable with their surroundings, which is better than having to play at a new venue.
Glenswilly have the talent in their ranks, and we don’t mean only the obvious big stars, to pull it off. It is hard to believe that Glenswilly are only eight years in senior football and already they have reached an Ulster senior final. Every single Glenswilly person at Healy Park on Sunday will wear the club colours.
Supporters know that this group of players has already created history in the county and they’ll be expecting them to surprise some and create yet more history come 5 o’clock on Sunday.

THE group know as the ‘elite’ who referee in the Premier League in England could be described as a tampered an protected species.
It is a costly business in terms of bans and fines if you dare to question their ability and integrity. It is understandable that the latter shouldn’t be allowed as one has to presume that it is unlikely that the mistakes they make are for any reason other than a lack of ability.
Last weekend, again this was in evidence in many of the games at the top level – in three in particular.
Wes Brown was red carded by Kevin Friend in what is up there with the worst of decisions made this season. Brown’s appeal has been upheld and rightly so. Friend has been dropped temporarily from the ‘elite’ panel – again, rightly so. What can’t be changed is that Brown was sent off and, ultimately, Stoke City were helped to a 2-0 win that proved very costly for Sunderland.
Both Kevin Mirallas and Wayne Rooney only picked up yellow cards when straight reds should have been the only option for the referee.
in the Everton man’s case, Phil Dowd, one of the most experienced Premier League referees who was continually making bad calls, let him off for a tackle on Luis Suárez which, no doubt, would have got the Liverpool man a red card had he committed it.
Rooney kicked out at Jordon Mutch and only received a yellow from Neil Swarbrick and Rooney then went on to score and help United to a two-all draw.
Bad decisions by referees can cost managers their jobs. Just recently, Mike Reilly had to phone Steve Clarke to apologise for Andre Marriner’s awful decision to award Chelsea a penalty that cost West Bromwich Albion two crucial points.
Refereeing, without doubt, is a tough job but some at the top level are making it much tougher than it needs to be.