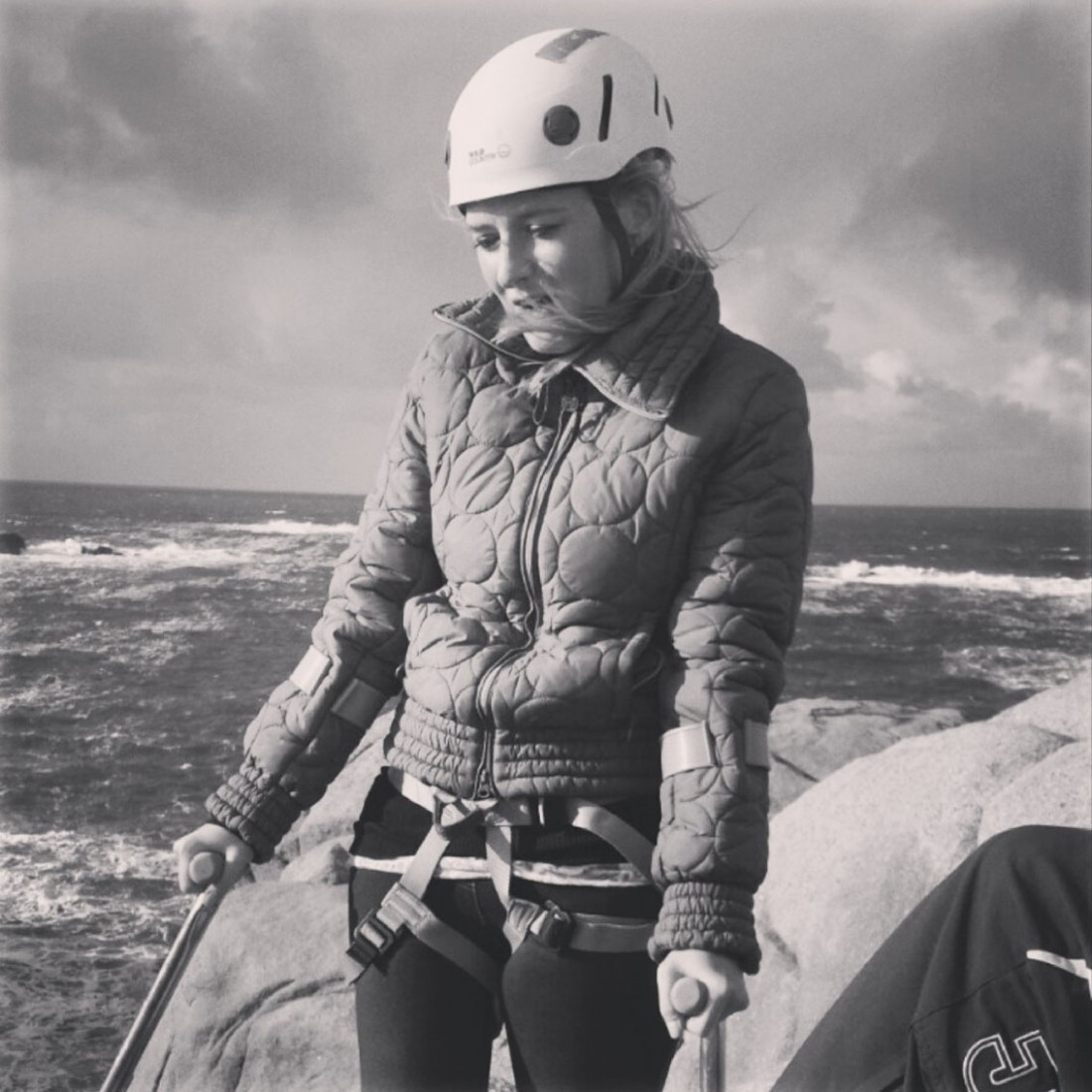 Nikki Bradley out in Cruit Island.

BY SEÁN P. FEENY
IN AUGUST we first introduced Letterkenny woman Nikki Bradley (27) as she embarked on her incredible journey to raise awareness of an extremely rare form of bone cancer which she battled and conquered in her teens.

When Nikki was just 16 she was diagnosed with an extremely rare form of bone cancer, Ewing’s Sarcoma, which usually affects children and young adults.
Over the years Nikki has overcome a lot of adversity, including two hip operations, all in the aftermath of her cancer treatment and since needs to use crutches, but this hasn’t stopped her from getting fit in her campaign, Fighting Fit For Ewing’s, to raise awareness.

To say that Nikki has been busy since we last spoke to her would be an understatement as she has stepped up her training over the past three months.
“At the start the aim was to see how fit I could get, but as I kept getting stronger we started to set monthly challenges to keep me motivated.”

Nikki’s most recent challenge took place last Tuesday when she joined Iain Miller of www.uniqueascent.ie and Moira Ní Ghallachóir of Rock n Roam to go rock climbing in the beautifully picturesque of Cruit Island in the Lower Rosses.

Rock n Roam is an activity and cultural experience in the Gaeltacht, inviting you to immerse yourself in activities and practice your ‘cupla focal’ while you’re doing so.
Organiser Moira, of www.mng.ie, invited Nikki and her personal trainer Michael Black of Optimal Fitness out for the day to give Nikki a brand new type of challenge.

Nikki said what she really enjoyed about the experience was that instructor Iain not only showed her everything, but also made sure to teach the art of rock climbing.
“When I got to the rock and it was my turn to go up, I had to put my crutches away and had no way to safely get near the rope, but with difficulty I made it, but then I made the mistake of looking down,” she laughed.

“It was very breezy, raining and the sea was vigorous, but it really awoke your senses and although for a moment, for the first time, I felt like I couldn’t do it, I made it to the top and the view from the top of the rock was so beautiful and rewarding.

“I really enjoyed our day out in the Gaeltacht, it’s a gorgeous area and I can’t believe that I hadn’t been out there before, I would definitely do it again and take my friends.”

One of the first challenges Nikki undertook was kayaking in Glenveagh and although she has undertaken a lot tougher tasks since, she didn’t feel as confident when she was standing beside the kayak about to step in.

“On the day I really didn’t think I could do it when I saw that I had to get into the kayak by stepping into it, but once I did it I was really chuffed.
“Robbie, the instructor, also got me to get out of the kayak and climb back in again. I did it the first time around and Robbie said not even every full abled person can do that.”

Nikki’s most gruelling challenge to date was her second – Muckish. This climb was meant to be a warm-up for Errigal, but after the day Nikki, her coach Michael and experienced climber Pat McDermott had, she has decided Errigal would not be much of a challenge anymore.

“What was meant to take us maybe two and a half hours, took us five hours and 42 minutes. It was a very wet, windy and misty day and after getting to the top we ended up turning off to go down too early as we couldn’t see where we were going.
“It was a scary experience, but strangely I loved it and I really feel I got far more out of Muckish than I would out of doing Errigal now,” she said.

While these challenges are giving Nikki a lot to write about on her blog, Fighting Fit for Ewing’s, which helps her promote the awareness campaign, her ultimate goal is to start fund-raising. “I’m doing all of this first as I don’t want to ask people for money if they don’t know what they are donating to, Ewing’s is still a very unknown and rare form of bone cancer.”

Nikki said her campaign has been a real eye opener, but more importantly, it has made her not only physically, but emotionally stronger than ever.
She said: “I have accepted a lot of things that I found hard to deal with before about my disability; I don’t even mind saying now that I have a disability, which I previously found hard to accept and struggled to come to terms with.”

Nikki’s campaign has received a lot of national attention thanks to the help of broadcasters such as DJ Nikki Hayes, and she has also been contacted by people privately from all around the world through her online blog.

“There has been a lot of feedback from complete strangers from all around the world; my blog has been read in over ten different countries.
“I got a message from a girl in India who also had Ewing’s, but also from a man in Dungloe who had two hip replacements and didn’t let this stop him from doing sports and ended up cycling from Mizen to Malin. I know how hard cycling is with one hip replacement, so I can imagine how hard it was for him. It’s really rewarding to get these messages.”

Nikki’s next challenge will be a day out at the Todd’s Leap Outdoor Activity Centre in Omagh, Co Tyrone; but she has also been approached by another charity fundraiser to walk part of the Camino de Santiago, which she is seriously considering for 2014.
Nikki’s motto is she will never say no to a new challenge; if she can physically do it, she’s up for it! She will now be inviting members of the public to suggest new challenges to her through her social media sites in her continued campaign.

As you can tell, there is no stopping this young woman and we wish Nikki all the best as she continues to raise awareness with her campaign Fighting Fit For Ewing’s.
You can follow Nikki Bradley’s inspiring journey on Twitter @FightingFit4Ewings, Facebook or by following her blog on fightingfitforewings.wordpress.com

This Friday, November 8, Nikki Bradley will be a guest on TV3’s Ireland Am, so be sure to tune in. The programme begins at and Nikki will be on around 9.15am. 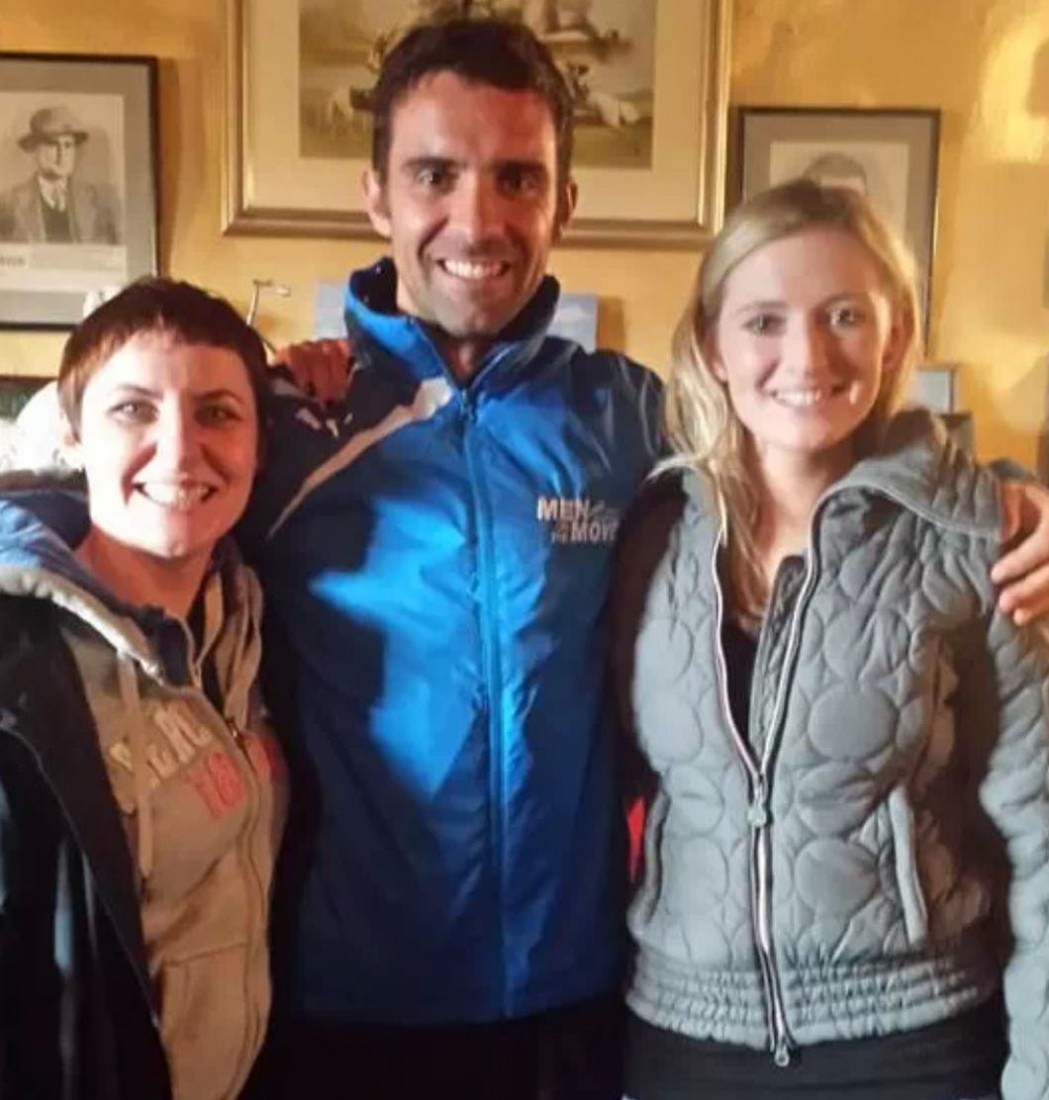