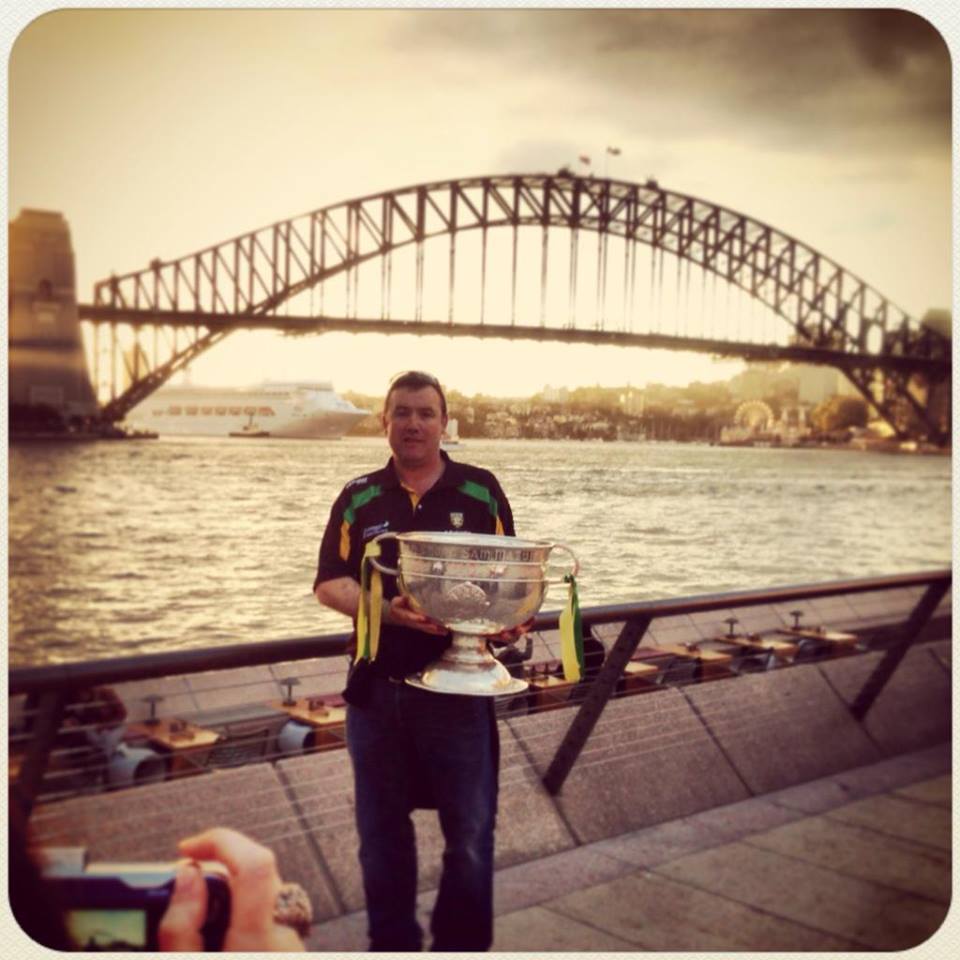 Cieran Kelly with the Sam Maguire Cup in Sydney.

CIERAN Kelly cuts to the chase.

The St Naul’s clubman has decided to leave his hat in the ring having been nominated for the position of county treasurer at next month’s convention in Letterkenny.

The incumbent, Grace Boyle, has confirmed that she will vacate the seat. So far, Kelly is the only one of the nominees to publicly declare an interest in running. He is the front-runner at this juncture, though, with Aideen Gileen not running and Danny McNamee’s (the current vice-Chairman) cards remaining close to his chest.

A successful businessman, the owner of the Kelco Communications chain, Kelly is clearly a man who has given the role considerable thought.

He is also no stranger to the workings of the GAA as he is currently treasurer of St.Naul’s. Married to Jacinta, much of the spare time is taken up by helping coach underage teams at the club where his son Joseph (10) plays. Their support has been important as he has mulled over the decision to stay in the race for the treasury.

His view is that Donegal GAA is now ‘big business’ – and should be treated as such.

The numbers from last year’s accounts make the eyes bulge: For instance, turnover was well in excess of €1million.

“To be successful on the pitch, as Donegal have been over the last number of years, we need to remain being successful off the pitch,” he says.

“It’s one of the top five football brands in the country.

“Maybe it’s being under-sold. Maybe there could be more value in the Donegal brand for Donegal GAA. There is more revenue that can be generated by Donegal GAA; simple things are there if we want them to be.

“The Donegal brand needs to be sold for what it’s worth.”

Kelly’s words should not be taken as a criticism of previous regimes for negativity doesn’t cross his mind.

“Everyone can make a positive contribution. It’s about being positive. I take that to my business every day. You must start every day in a positive frame of mind and continue to be positive in everything you do,” he mentions.

“It’s important to get good, hard-working GAA people involved. It is important that the County Board and the clubs work together for the common good of Donegal GAA.

“If elected I look forward to working together with the other members of the executive and also the clubs for the benefit of Donegal GAA.”

He mentions that retaining the services of former players is key in assisting to ‘sell the brand’ and believes that Donegal can be among the market leaders in the business.

The time is now, he says, for Donegal to make the move.

Acknowledging the work done by previous officers – ‘By that I mean anyone who ever did anything for Donegal GAA’ – he says: “They took it to where it is. Now let’s see if we can take it on again.”

Kelly has spent the last year as the Chairman of Club Tir Chonaill, the fund-raising arm of the Donegal County Board, having succeeded Danny Harkin, who spearheaded the Club Tir Chonaill fundraising campaign in 2012.

It is here, when he begins to talk of the specific aim of Club Tir Chonaill – to secure the necessary funds to ensure completion of the Donegal GAA Training Centre in Convoy – where his passion for Donegal football is laid on the table.

“The future for Donegal GAA is very simple: It’s in Convoy,” he says.

“It is where we can build on the success of the last number of years.”

Two full-sized pitches have already been developed and have been used by a host of county teams and county officials are aiming to install floodlights on both pitches, while they also harbour hopes of developing two, and possibly three more pitches in the near future. The next, perhaps the most crucial, phase will be the development of the clubhouse, which is where Club Tir Chonaill’s focus is centred.

To date, Kelly and the Club Tir Chonaill fund-raising committee have brough in more than €150,000 for the Training Centre.

“There would be huge cost saving if we get to Convoy. With a fresh approach and a fresh outlook at the financial side of things I feel that we can make further cost savings, even now.”

In his role as Club Tir Chonaill Chairman, he traveled near and far. There was the marathon weekend in England where he sandwiched a visit to Leeds with Sam Maguire between two functions in London; where he’ll be again this weekend for the Donegal Association’s annual function.

Networking here, he feels, could hold a golden key for the path ahead.

There was also the highlight of his time in the GAA – becoming the first person to take Sam Maguire to Australia.

“It was an unbelievable experience,” he says.

“Seeing so many Donegal people turn out at events to get their chance to be with Sam was a great experience. This was their chance to be involved in the All-Ireland winning year because many could not be there in September 2012.”

It is in these arts and parts where he feels Donegal can make real strides.

“Just because some of our young people have left Donegal in search of employment to many parts of the world does not mean that they stop supporting Donegal. If we can give the Donegal people something then they will give us support. By that I mean simple things: Giving them information, over the internet, through apps and social media. They need to get something in return for their money.

With Donegal’s finances now at unprecedented levels, Kelly believes that consideration should be given to employing a sales/marketing-type figure – who would effectively earn his/her own salary.

“You just go back to the brand,” he says.

“You just sell the brand and  Donegal GAA is one of the top five football brands in the country now. There are other counties at it. There are big clubs in Dublin actually at it; out selling their brand.

“I would look at employing someone on a contract, get them to go out and earn it. You’d need someone sales focussed. The GAA in Donegal won’t survive at the level we want it to be at unless we have a steady stream of income.