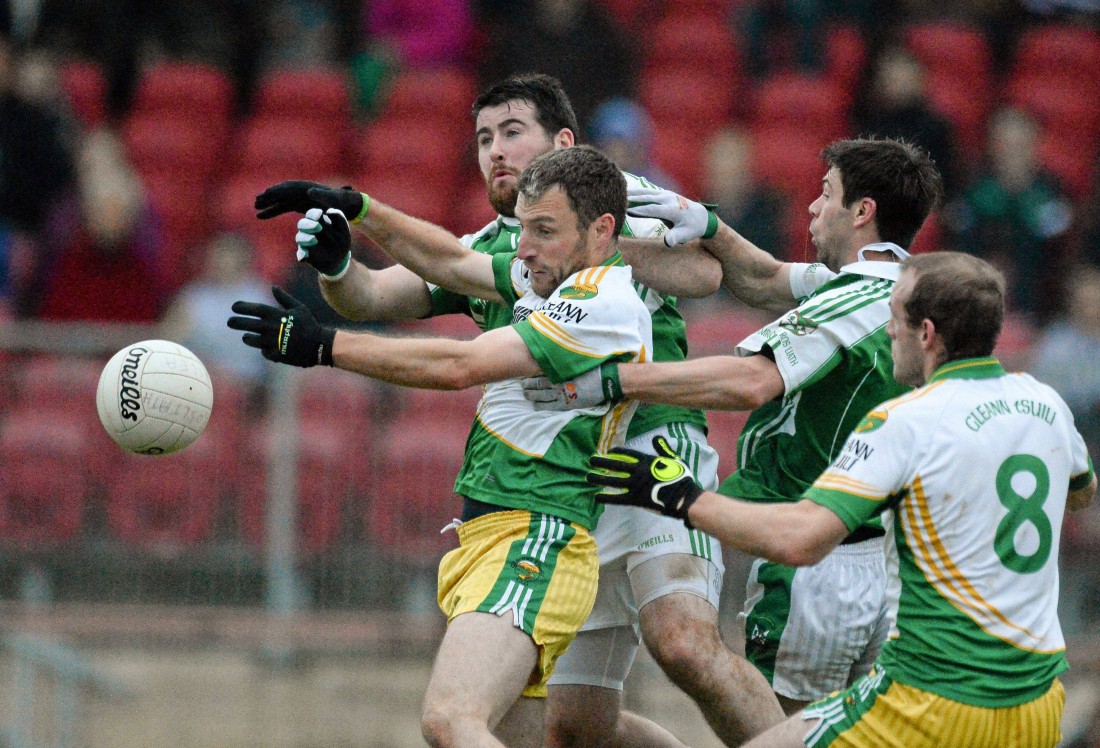 FROM CHRIS MCNULTY IN OMAGH

THE ‘wee club’ has joined the ranks of Ulster’s big boys.

Glenswilly became only the third Donegal club in 38 years to reach the Ulster senior club championship final as they defeated Fermanagh champions Roslea 3-9 to 2-8 at Healy Park yesterday.

Colin Kelly netted a brace of goals and Michael Murphy struck another to shoot Glenswilly into the December 1 final against Ballinderry.

Leading 2-5 to 0-5 at half-time, with Kelly on target in the second minute and Murphy slamming home in the 20th minute, Glenswilly looked to be home and dry when Kelly flicked a Murphy free to the net in the twelfth minute of the second half.

Roslea had been frustrated by Glenswilly’s rearguard, but in a madcap two-minute spell Seamus Quigley netted a penalty and Conor Mulligan found the net with a freak goal, as his long punt upfield completely caught Philip O’Donnell. Roslea were back to within two points, but there was no question of Glenswilly buckling.

To put that paradox into perspective, the Glenswilly club is just 32 years old and in its eighth year playing senior football in a county that has produced just two finalists (Killybegs in 1991 and Naomh Conaill in 2010) in a competition not won by a representative from these parts since St Joseph’s in 1975 – the only time Donegal has had success. Yesterday’s opponents are in the middle of celebrating their 125th anniversary and have twelve Fermangh Senior Championship titles on their board.

“We rarely compete at Division 1 in underage competitions because not strong enough and don’t have the pick. We have never won a Division 1 county title at underage level. I wonder how many teams reached an Ulster final on the back of that…” Gary McDaid, Glenswilly’s manager wondered.

The returned McDaid has the golden touch with Glenswilly and the game plan worked a treat, particularly in the first half, when his team snuffed out the imposing Quigley and led by six at the interval.

He said: “We got ahead at half-time and we were happy with where we were at. The boys showed good composure and experience. When their backs were against the wall, they came out fighting and they didn’t throw in the towel.”

While Eamon Ward, James Pat McDaid and Joe Gibbons stood firm, the livewires of Darren McGinley and Kealan McFadden left Roslea with plenty of problems in addition to the stellar forces of the Glenswilly side.

It seemed like a case of it having been ‘last one out of Glenswilly, turn out the lights’ yesterday as Healy Park was engulfed following the final whistle.

Ballinderry await them in a fortnight after they saw off Kilcoo 1-10 to 0-9 in Armagh. However, they lost Kevin McGuckin to a straight red card and, barring a successful appeal, he’ll be out of the final. Ryan Scott also saw red but his was for a pair of yellow cards.

For Glenswilly, they have the Seamus McFerran Cup on the radar now.

McDaid said: “It is a dream game for us. Ten years ago this was a pipe dream for us. It’s massive for us and it’s a great opportunity. We want to go there and win the game – we won’t be going to make up the numbers.”

READ A MATCH REPORT OF GLENSWILLY’S WIN OVER ROSLEA HERE