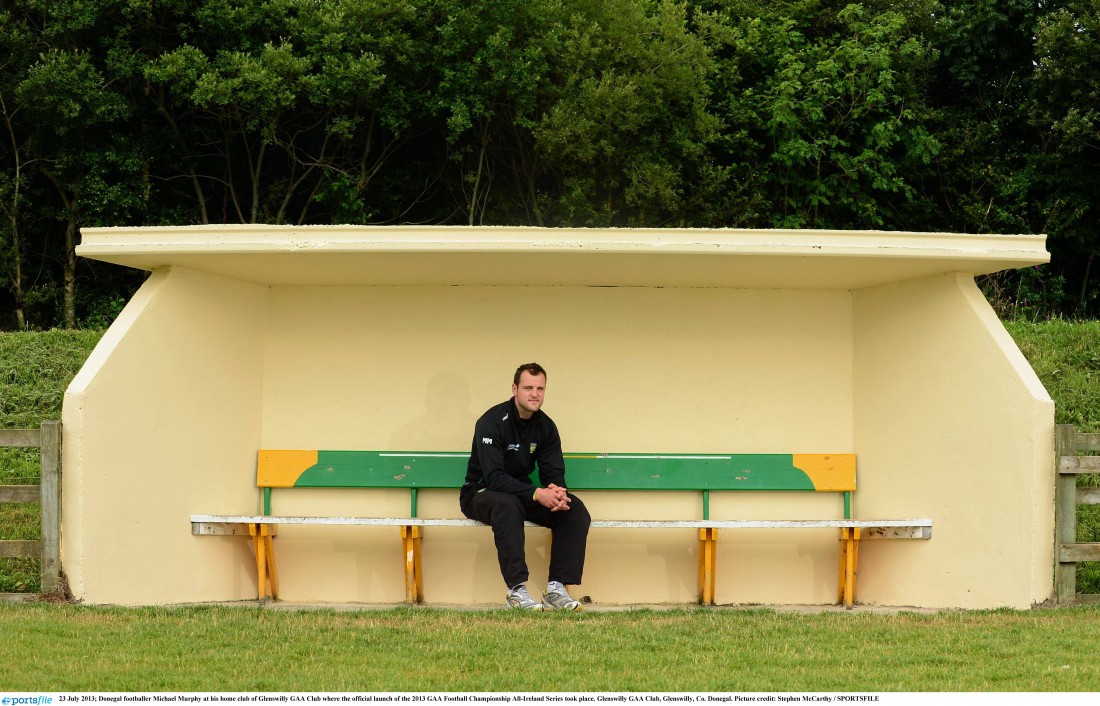 Michael Murphy in the dugout at Pairc Naomh Columba, Glenswilly.

MICK Murphy tells the story of that Tuesday evening in 2011 when normality was beginning to be restored to the football fraternity in Donegal.

Two days previously, Donegal lost an All-Ireland semi-final to Dublin, quite literally by a hair’s breadth. The pill was a bitter one to swallow but Mick Murphy and his ilk had their duty to attend to.

The club championship was looming and the pieces had to be picked up from players broken by their narrow defeat at Croke Park.

Murphy was coaching at Glenswilly at the time. Gary McDaid was at the helm alongside John McGinley.

As he was setting up the cones, around twenty minutes before the players were due to arrive, Murphy spotted something out of the corner of his eye. Two men arrived early, bags slung over their shoulder and ready for action.

When the rest of the squad arrived, they found Neil Gallagher and Michael Murphy seated, togged and ready.

“It was a message they sent out – and I knew then it would take something special to beat us,” Mick Murphy, now the club chairman, says. Of course, the two men were central figures as Glenswilly went on to win Dr Maguire that year.

Now, they’re back, primed and ready for an assault on the Ulster club final.

The totemic duo have since been joined in the Donegal squad by Gary McFadden – but the elite have remained at the heart of the club.

Much was made in the build up to this year’s county final about Murphy having had to play for the Ireland International Rules team the previous evening. The player kept his counsel all the while but after a Man of the Match performance in the Ballybofey showpiece, Murphy laid his feelings out.

“I have to go on the record and say that I am a proud Glenswilly man tonight,” he said.

“It wasn’t easy because the club might have felt that I was turning the back on them. That was never the case.

“Once I made the decision it was just a matter of getting the head down and challenge for the two games.

“It’s football: It’s what I enjoy doing, what I love and, as a young fella, if you were told you’d play for your country and then your club in a county final, you’d  take that.

“It was a decision that I made ten days ago. I went with it and I wasn’t going to argue, crib or cry like I maybe might have been able to do.”

Darren McGinley feels the rest of the players have been improved by his presence.

“We’re by no means a one-man team, but Michael is a class act,” he said.

“You can wee things he does, makes things look so simple. Michael deserves everything good that comes to him. He dedicates himself to football.”

The club means everything to these players. It is not too long ago that the Glenswilly PRO was one Neil Gallagher. The club had a vacancy and, rather than see them stuck, Gallagher rowed in and did his bit.

Others at their level could take a cue from them.

“I really got to know him at St. Eunan’s,” McDaid said.

“Meeting him every day and talking about football. He came in and helped me with the MacRory team so we have a good relationship.

“All the lads look up to him and the management team look up to him. Outside of our circle people think he’s a quiet spoken lad and a mannerly fella. He is all that. But in our dressing room when he speaks, he speaks with real authority and everyone listens. It’s massive.”

At times during the season, their availability can be haphazard, but McDaid has had Murphy, Gallagher and McFadden to call on since Donegal’s season ended – and Glenswilly have really reaped the dividends.

McDaid said: “Now in Ulster, it’s fabulous that we have the county boys back at training. That’s a huge bonus to have them there every night as opposed to just having them the night or two, usually just the night, prior to championship here in Donegal.

“That isn’t ideal preparation. So to have them all the time is huge for us. It’s such a bonus. All our young players look up to those lads and they learn so much from those boys.”