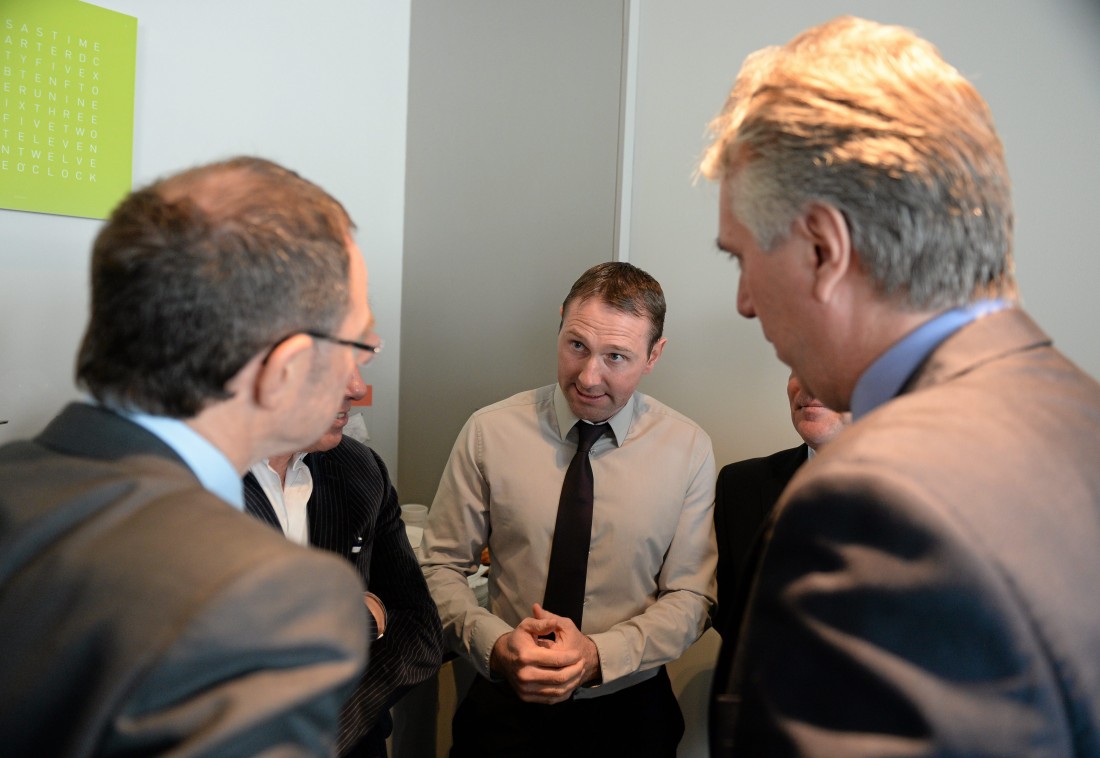 JUST before Martin O’Neill was unveiled to the Irish media on Saturday, the new Republic of Ireland manager held court in adjacent room of the Gibson Hotel with a number of underage coaches and managers.

Among the attendance was Tom Mohan, the former Finn Harps midfielder who is the manager of Ireland’s Under 17 team.

Mohan, a native of Aughadrumsee, Co.Fermanagh, played seven seasons with Harps having moved to the Ballybofey side in 1998. Having completed his Level 1 coaching badge and UEFA ‘B’ Licence during his playing days, Mohan advanced on to do his UEFA ‘A’ Licence. A development officer with the Football Association of Ireland, based in Cavan, Mohan was involved with underage Irish set-ups under the management of Sean McCaffrey, Joe Boyle and John Morling before being appointed Under 17 manager in September 2012.

“It’s been a great experience,” he says.

“It’s a completely different ball game when you’re a manager. You’re dealing with clubs, with coaches, players, parents, everybody, as well as the FAI’s International Department and you’re managing budgets. It’s a whole different world.

“There’s a lot of stuff to juggle.

“We’re trying to get to as many games as possible, go around the Emerging Talent centres and also looking at guys who are playing in the League of Ireland Under 19s, the DDSL and the various leagues. It involves going across the water too. We have scouts abroad in England who identify players and we’d take a look, but we’d be going over to watch our own players as well.”

Ireland drew with Latvia 0-0 on Monday in a game that was used as preparation for the elite qualifying round of the UEFA U17 Championships next spring.

Back in March, Mohan’s side just missed out on the UEFA Championships, drawing with Serbia when a win would have sent them through. Ballybofey man Alex Harkin, who Mohan knows well from his time at Harps, has accompanied some of Mohan’s teams as the Head of Delegation from the FAI in the last year.

“We needed to beat Serbia, but we drew nil-nil and we hit the post late in the game. People talk about it being a game of inches, but it really is. You’re dealing with thin margins all the time.

“That was a good experience for the players and we have a good crop of players together at the moment.

“Underage football has taken a battering from people who have been jumping on the bandwagon and haven’t recognised the great work that is being done around the country. We don’t have a massive population, but we have so many good volunteers who are doing fantastic work. The development of players in Ireland is nowhere near the levels people are speaking about. It’s quite good, actually.”

On Saturday, Mohan got a chance to quiz O’Neill on the finer points of his tenure – and the ex-Harps maestro was impressed by his first meeting with the Derry native.

“It was fantastic to be a part of a historic day for Irish football,” he says.

“Martin O’Neill is a legend in Irish football and is a very popular manager. With the full desire and will to win, he can achieve his goals with Ireland. Look at the players we’re bringing through, Coleman, McCarthy and Brady for instance, Martin will have recognised that and will want to take these players with him on the journey.”

Mohan played on a Harps side that is still revered around Navenny Street. First names sufficed: Mention of ‘Tom’, ‘Paddy’, ‘Fergal’ was enough. The Finn Park faithful even reserved a terrace anthem for Mohan; he was a darling of Finn Park. The feelings were mutual though, for there remains a sparkle about Tom Mohan’s expression as he talks about his time in Ballybofey.

“I had a fantastic time at Finn Harps,” he says.

Snapped up by Charlie McGeever in the summer of 1998, Tom Mohan played in the Harps side that reached the FAI Cup final in 1999. The Fermanagh man scored in the first replay, but the memories, even now, fourteen years on, still draws a pained expression.

“I still wince when I watch the FAI Cup finals now,” he says.

He can still see the slight pull on Barry O’Connor by Declan Boyle, John McDermott pointing to the spot with the 120 minutes almost up and the exhilaration of seeing Brian McKenna save Colm Tresson’s penalty being wiped out by the emergence of Kieran ‘Tarzan’ O’Brien to slot in the rebound. Cruel, cruel fate. To this day, they talk in Ballybofey of O’Brien’s encroachment and what might have been.

Mohan says: “We had a great group of players that hung around for a few seasons. Looking back, it’s probably fair to say that we should have achieved more. It was a memorable time. I had a really memorable time at the club. We had some great days. We just missed out on Europe and got to the FAI Cup final in my first season.

“Charlie McGeever had an exceptional group of players. Even now I think it’s fair to say that we deserved to win the Cup final but, c’mere, things just didn’t work out for us. That Cup final was probably to the detriment of Finn Harps. They say that success breeds success, but we didn’t actually get any trophies that year and it sort of knocked us back. It is all ifs and buts, of course, but if…you just don’t know how it could have spiralled for Harps if the story had a different ending that year.”

Mohan had scored one of the Harps goals in the gut-wrenching two-all draw. O’Connor had levelled late in the day after a Jonathan Speak goal in the 58th minute gave Harps the lead. Charlie McGeever once said: “I looked at the Cup twice and each time I turned around we conceded.” Then, Mohan looked to have won it – again. He says ruefully: “I mishit a shot – it could have gone down as the luckiest Cup final go of all time!”

Mohan stuck around in the lean times that followed.

Along with Johnny Kenny, Jonathan Minnock, Patrick McGrenaghan, Declan Boyle and Shane Bradley, among others, the finally kissed the stars in 2004 when they won promotion back to the Premier Division, thanks to their winning of the First Division.

It had come after three play-off defeats in a row.

Derry City’s win over Harps in the dramatic ‘Battle of the Brandywell’ is shelved on the bulging bookshelf that chronicles the dark days. There too is a chapter on a play-off defeat to Galway United, and another that Mohan doesn’t blow the dust off too much. The night was a crisp Ballybofey evening by the Finn and a Kevin McHugh hat-trick lit the touchpaper against Longford Town. Premier Division Longford were on the ropes against First Division Harps, but a penalty shoot-out beckoned to see who won the night.

Mohan was next up. Stephen O’Brien saved his effort and Longford survived. Mohan was distraught. Finn Park was distraught for the inspirational midfielder.

“There was so much at stake and here I was, the villain in the whole thing. It’s one kick for the Premier Division or to stay where you’re at,” he says.

“I wish that I had mishit that one! That was a killer.” 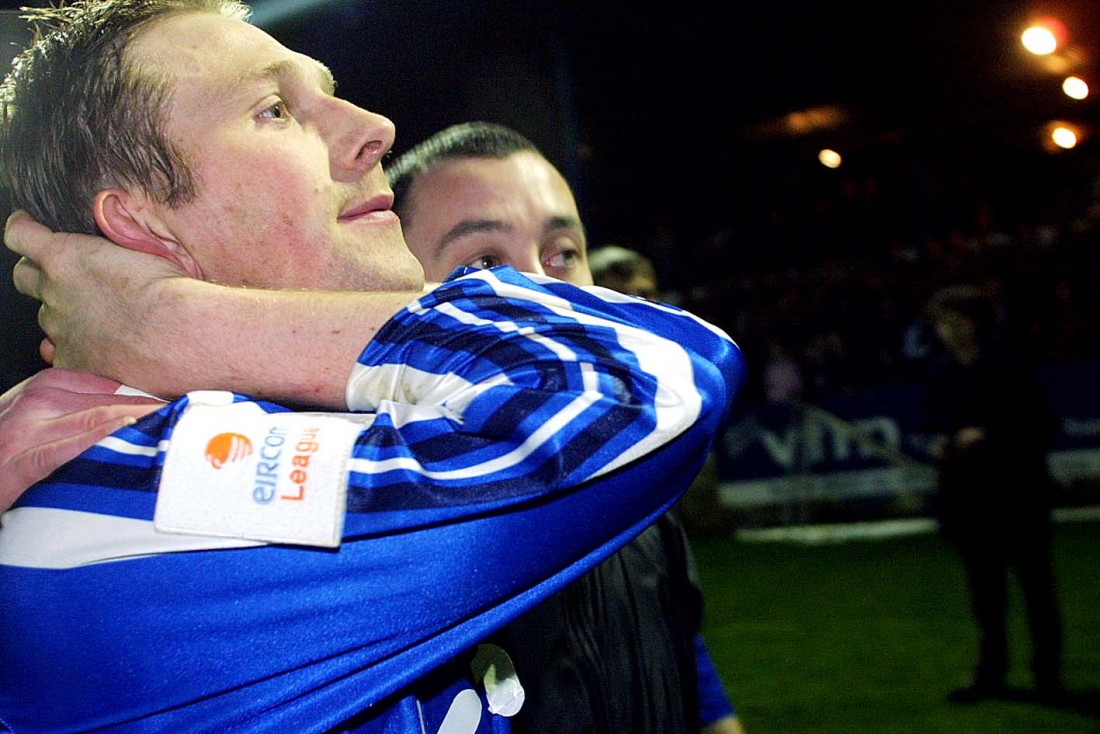 Tom Mohan is distraught after his miss in the promotion/relegation play-off against Longford Town.

Harps finally scratched the itch in that glorious year of 2004. At last, Mohan and his ilk could savour the sweet, sweet taste of success.

He says: “Getting back to the Premier Division was a real driving force for us. We’d come so close in the play-offs that we just wanted to get rid of all of those bad memories. All the sickeners we had, all the disappointments – it made that win all the sweeter, I think.

“The high point was winning the First Division – the club hadn’t won a major trophy since 1974 and the fanbase was huge, just craving a bit of success at the club.”

In early January 2005, the word filtered around that Mohan was leaving Harps. Seven seasons on, he was bidding farwell to Finn Park. He signed for Longford Town, but an injury meant that his career effectively ended chiming the high notes at Harps in 2004.

“Coaching or management is a grand substitute, but you just can’t replace the buzz of playing,” he says, admitting he still races to check the Harps result whereever he is on Friday nights.

And news that a dozen applications arrived for the vacant manager’s post doesn’t surprise him.

He says: “People do know the history that is attached to the club and the potential fanbase. All it will take is just to get the ball rolling, get a wee hint of possible success and you’ll get the people coming out in their numbers again.

“Donegal is a massive football county – and it’d love nothing more than some success for Harps.

“I’d see a good lot of Donegal names in and around the Irish squads I’m involved with. Harps could tap into that. There is a lot of hard work going on in Donegal but the public need to be patient. Harps aren’t far away.”