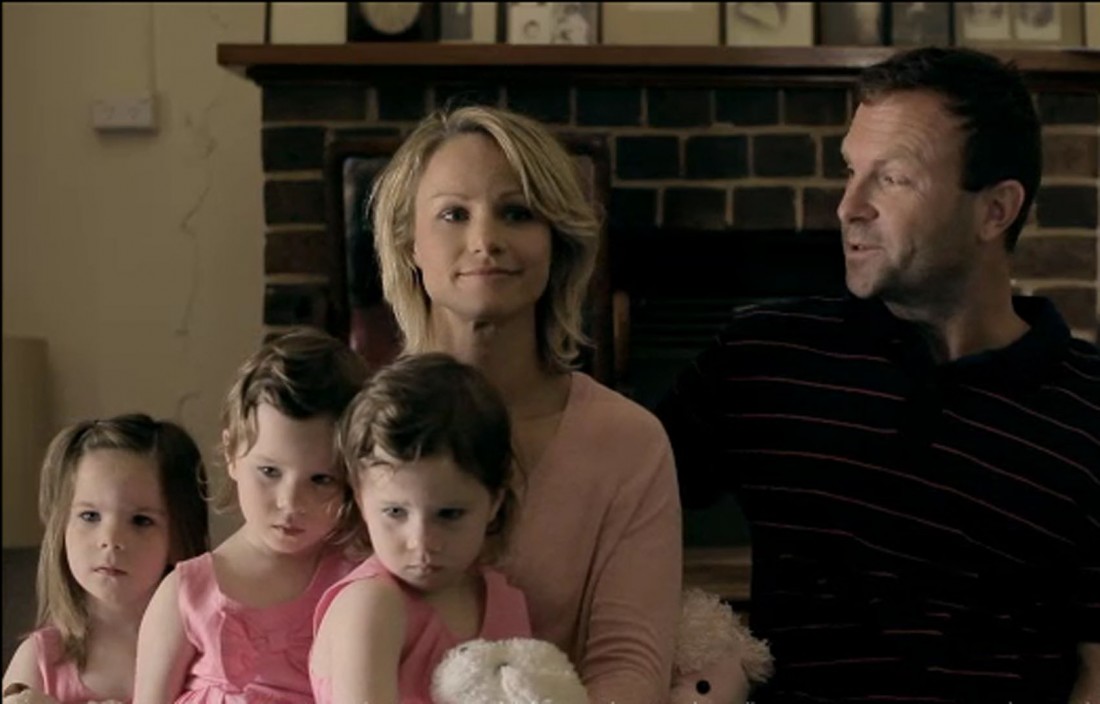 Declan’s wife Jodie and their triplets with the actor who played ‘Peter’, the onscreen father.

By Cronan Scanlon
A CASTLEFINN man said this week he is not disappointed at being left out of a television advertisement seen by millions in Australia which features his beautiful wife and their triplet daughters – because of his accent.

Declan O’Callaghan from Mullanbuoy, lives in Sydney with his Australian wife Jodie and their three year-old triplet girls, Naomi-Gwyneth, Bronwyn-Ava and Niamh-Charlotte, as well as Hannah (5).

Recently, they spotted a notice placed with the Australian Multiple Birth Association (AMBA) for Higher Order Multiples, calling for a family with triplets to star in a new VW Australia ad campaign.

“We responded, did an audition and got it,” Declan explained to the Donegal News this week.

The new campaign ‘Welcome to the Family’ tells the story of an extended family arriving to celebrate a traditional family get together.

One couple, ‘Peter and Susan,’ arrive in their VW Touareg with ‘their’ beautiful triplet daughters in the back.

However, a professional actor was hired-in to play the ‘Peter’ part as Declan is Irish.

“They needed Aussie males given they were selling to Aussie males which is fair enough I suppose,” Declan said.
“Apparently, this was a good one to do and a lot of professional actors were queuing up to be involved, and then there was us.
“I suppose my Donegal accent was too strong, but we did it for the experience – it was great fun and we got paid for it.
“So, no complaints from me.”

A Hedge Fund partner with Deloitte in Sydney, Declan and Jodie tied the knot in St Columba’s Church, Doneyloop, in April 2007.

The son of Donal and Eileen O’Callaghan, Declan and Jodie came back to Donegal in 2011 to have the girls Christened in the local church.

The minute-long ad can viewed on http://volkswagenaustralia.com.au/welcometothefamily/ by clicking on the ‘Peter and Susan’ icon.