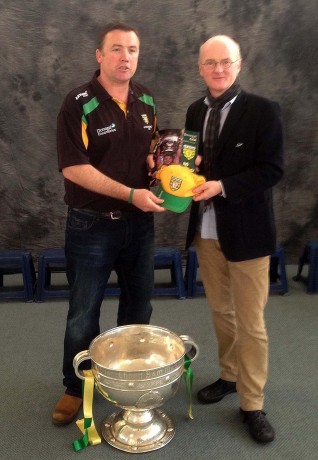 ‘DONEGAL GAA is big business – and should be treated as such’.

That is the view of Cieran Kelly, one of the nominees to succeed Grace Boyle as the Donegal GAA treasurer at next month’s county convention.

The nominations were released to the media earlier this week. Kelly is joined on the ballot paper by Danny McNamee, the current vice-chairman, who has been nominated for three positions (vice-chairman, treasurer and Ulster Council delegate) and left his name in the ring for all three.

St Naul’s clubman Kelly believes that Donegal must be treated as the business it has become.

“Any business that is turning over the figures Donegal GAA is turning over, it has to be hands on and there has to be money made out of it,” he told the Donegal News this week, in an interview to be published in Friday’s edition.

“It’s one of the top five football brands in the country. The Donegal brand needs to be sold for what it’s worth.”

Kelly could face a challenge from McNamee, though that is dependent on the result from the vote for the vice-chairman’s position, which is something of a logjam at the moment. Six men, including the 1992 All-Ireland winning captain Anthony Molloy, have let their names go forward. Seán McGinley, Mick McGrath, Denis Ellis and Dan Harnett have all allowed their names to go forward to the convention.

If McNamee is re-elected as the vice-chairman, then Kelly will be returned unopposed.

The vice-chairman and Ulster Council delegate’s positions have the biggest interest. Outgoing treasurer Grace Boyle will run for one of the two Ulster Council positions – as will sitting delegates Pat Conaghan and Brendan Kelly as well as PJ McGowan, Pat Walsh and, possibly, McNamee.

Mick McGrath has been nominated along with Sean Dunnion for the Chair – but it is not yet clear if McGrath will challenge the sitting officer.
The same is true of Peter Maloney, the Sean MacCumhaills man who has been nominated for the secretary and assistant secretary’s positions.

Yesterday afternoon, he said he would make his mind up ‘closer to the time’ but admitted that he had ambition for the secretary’s office: “All Gaels have certain aspirations and this is mine. I have been secretary of Sean MacCumhaills and also the Northern Board. I’ve given it a lot of thought.”

Oisin Cannon and Ed Byrne have left their names in the running for the PRO position, while Brendan Kelly could mount a challenge to Frankie Doherty for the assistant treasurer’s spot. Development Officer Michael McMenamin, Coaching Officer Anthony Harkin, Oifigeach Gaeilge agus Cultúir Con O’Donnell and Central Council delegate Niall Erskine are the only ones, at the moment, to be guaranteed a return to their portfolios.