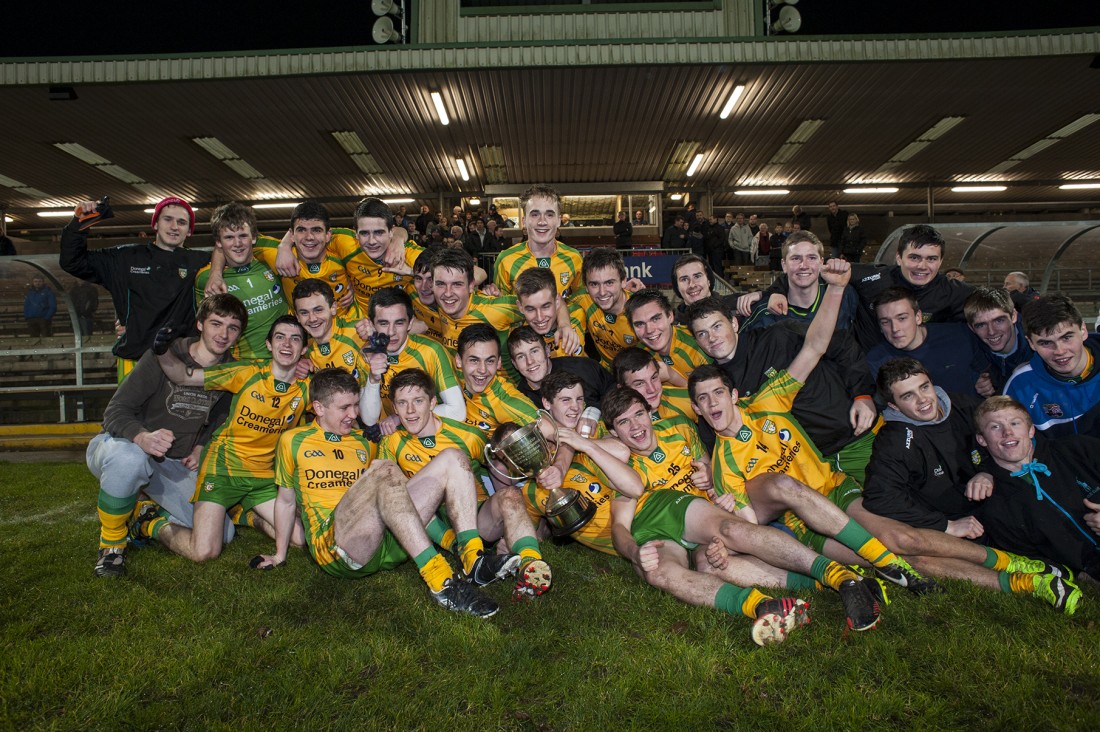 DARACH O’Connor came off the bench to help steer Donegal to their fourth Ulster Vocational Schools title in a row, their fifteenth in all.

The Buncrana man, a recent call-up to Jim McGuinness’s Donegal senior squad, was on the field for only sixteen minutes – but was the difference between the sides, even with Donegal having lost Christian Bonner to a harsh sending off in the 46th minute.

‘Jigger’, as he goes, cracked home a pair of goals after setting up the opener for Jamie Brennan.

It was a clear demonstration of that lightening-quick and deadly talent that has caught McGuinness’s eye. There had been only two points between the teams when O’Connor was called into action. By the conclusion, he had been the match winner.

It was from O’Connor’s clever pass across the goal face that Jamie Brennan was able to steer into the unguarded net for Donegal’s opening goal just after his introduction.

O’Connor – the 2013 Donegal Minor captain – had missed Donegal’s landslide win over Tyrone in the semi-final, but the diminutive attacker was in clinical form here after his introduction.

Eight minutes from the end, O’Connor burst clear and, despite having his initial effort saved by Keelan O’Connell, O’Connor tucked the rebound beneath the ‘keeper to the net.

Man of the Match
Darach O’Connor (Donegal): How does scoring 2-2 and setting up another goal sound for a sixteen-minute appearance? Without having the Buncrana lad in reserve, Donegal mightn’t have topped the tree here. As good an impact sub as you’ll see.
Up to his red card, Christian Bonner was excellent, controlling the tempo and being a fine link between defence and offence.

Turning Point
Cavan pulled the deficit back to four points when Sean Keating netted – but O’Connor’s second goal ended any hopes of them mounting a late comeback.

The Whistler
Dermot Love was a peripheral figure for long spells, but Christian Bonner felt his wrath when, in the 46th minute, the Na Rossa man was red carded, shown a second yellow card for dissent.

Terrace Talk
An old bug bearer now, but consider that this was an inter-county final and neither side saw fit to line out with their players wearing the numbers beside which they were listed. It really shouldn’t be so complicated…

What’s Next?
The million dollar question as regards this competition’s future is concerned. Its demise has been rapid and, in his programme notes for the game, Ulster Vocational Schools President Hugh Clerkin said: “The reality that this could be the last inter-county game played in the province is indeed a sad possibility.”