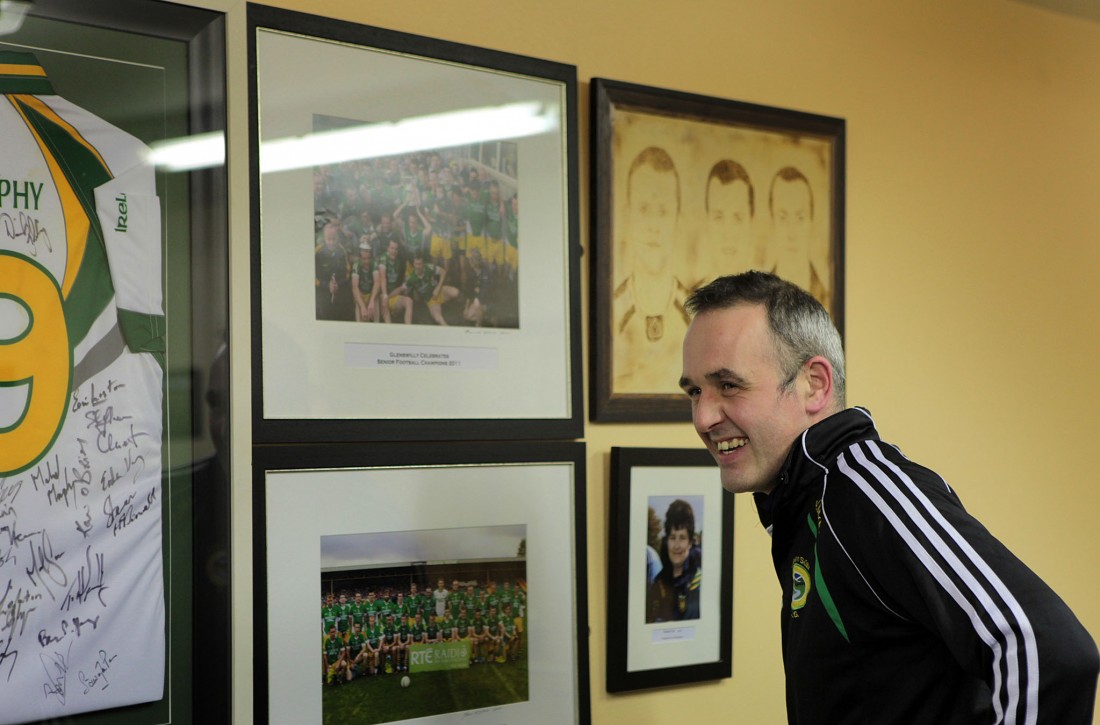 THE clubhouse at Pairc Naomh Columba is decorated with pictures of Glenswilly teams from the last thirty-one years.

That Roslea, their opponents in the recent Ulster semi-final, are this year celebrating their 125th anniversary shows the stature of clubs they’re mixing with.

This Sunday, Glenswilly tackle Ballinderry Shamrocks, who have been on the go since 1926.
Glenswilly’s stock has risen considerably rapidly.

John ‘Brockagh’ McFadden has been on the go with Glenswilly’s senior team for around sixteen years now.

Time was when his father, Charlie, would chastise the young John over the silverware. Charlie played on the Glenswilly side that won the Junior B Championship in 1984. For an age, that was Glenswilly’s sole triumph.

“I used to listen to him harping on all the time that the Junior B was the only Championship that Glenswilly ever won. It was true, I suppose, but it was great then to win the Intermediate in 2005 and kick on from there,” McFadden says.

In 2005, Glenswilly reached the Ulster Intermediate final, losing to that late goal against Monaghan side Inniskeen. McFadden pondered the future around that time – and was quite content that he and Glenswilly had reached their zenith.

“We didn’t go into that year prepared to give Ulster a lash,” he says.

“Once we started to get the run, we stepped it up. It was just heartbreaking the way we lost it. That was one of the worst days ever for me playing football. It was a real kick in the teeth.

“You didn’t think that there’d be many more big days coming. To have two senior championship medals in the pocket and going to represent the club in Ulster is massive. It’s a great feeling to be involved in this.

“I dodged in and out of football for a while and then went at it when Peter (McFadden) and Phelim (Molloy) took over. When Francie (Martin) took over and we had that wee bit of success you kind of thought that would be the pinnacle.

“You do pinch yourself at times now when you think about where we are. How did we get here from that stage?”

His mother, Maureen, hails from Brockagh, hence the nickname.

He’s been through the mill with Glenswilly and the backdrop was once very different from the state-of-the-art facilities now standing in Foxhall.

McFadden, Daniel Gallagher, Gerard McGrenra and Harry Gallagher were the stalwarts for years. Brian McDaid is another of those footsoldiers still going strong.

“We were a yo-yo club and we had bother sometimes getting a team out. We had great craic but we just didn’t have the players,” he says.

“We’ve been blessed with a good set-up, a good underage structure and a good crop of players who can kick on. Players like Michael (Murphy), Neil (Gallagher), (Ciaran) Bonner and ‘The Cop’ (Gary McFadden) are flying. It’s great to have those boys.

McFadden made peace this year with the fact that he was set to be a bit-part player. He came on as a substitute in the county final win over Killybegs and was quite content to do so.

In the moments before their Ulster Championship quarter-final game with St Gall’s in Ballybofey, Gary McDaid beckoned McFadden. He was going in.
Aidan McDevitt injured himself after sustaining a nasty fall at work and McFadden was the man to fill the gap.

“He was flying. He was going so well all year and it was really unfortunate that it happened when it did,” he says.

“It gave me a chance.

“I didn’t know until five minutes before the game that I was in. My first Championship start of the year was against St Gall’s! It was just a case of, bang, you’re in, get the head right and get on with it. I had a steady enough game against St Gall’s and did alright against Roslea too.

“It was probably better that I didn’t know. It was just five minutes before the game that I found out. St Gall’s were a great side. They’re one of the big club teams in Ulster.”

He can remember a time when Glenswilly teams were soft centred. The bottle went when the game went into the melting pot. Their defeat in that Ulster Intermediate final of 2005 was perhaps the perfect illustration. Now, though, Glenswilly are as hard as nails and are up for the fight.

They’ve had their fair share of tight contests in the 2013 Championship – and come out on the right side when it’s mattered most.

“We had to get a bit more cuter and close games out,” he says.

“When you’re against the best in Ulster you have to do that.

“You can play all the nice football you want, all this swashbuckling stuff, but it’s no use without the results to back it up. We became a bit soft and we needed a bit of a mean streak in us. Some people mightn’t like it, but football has changed. It’s all about winning. You have to give it everything.

“Donegal club football is strong and you don’t really get the chance, like Crossmaglen, Ballinderry or St Gall’s, to get back to Ulster every year. They are in it more often than they’re not. This could be my last swing at it. I’ve threatened it before, but thank God I stayed around.”

McFadden hasn’t put a foot wrong against St Gall’s and Roslea and is looking forward to getting stuck in against Ballinderry.

“Ulster is a different step up altogether,” he says.

“Players are quicker and you’re up against the best in Ulster, playing against real inter-county stars from the province. Players here don’t let you off the hook when you make a mistake.

“Ballinderry are up there with Crossmaglen as one of the best club sides in Ulster. They’re contesting in Ulster all the time. Ballinderry are used to winning year-in, year-out. This is a massive, massive ask.

“We feel that, if we implement our game plan and are in the game with ten minutes to go, we’re in with a good shout.”
Ballinderry are one of those teams to which Glenswilly aspire.

Glenswilly mightn’t have the history and tradition of the likes of Ballinderry, who’ve been on the go for decades longer – but they’re eager to keep making history. The picture frames are at the ready again as another final rolls around. Their time is now.

As McFadden says: “This is our first final – and it could be a long, long time before we get this chance again. We really have to make hay when the sun shines.”