Advertisement
HomeSportGAABrendan Dunleavy: It would have been ‘wrong’ for MacCumhaills to go down
Advertisement 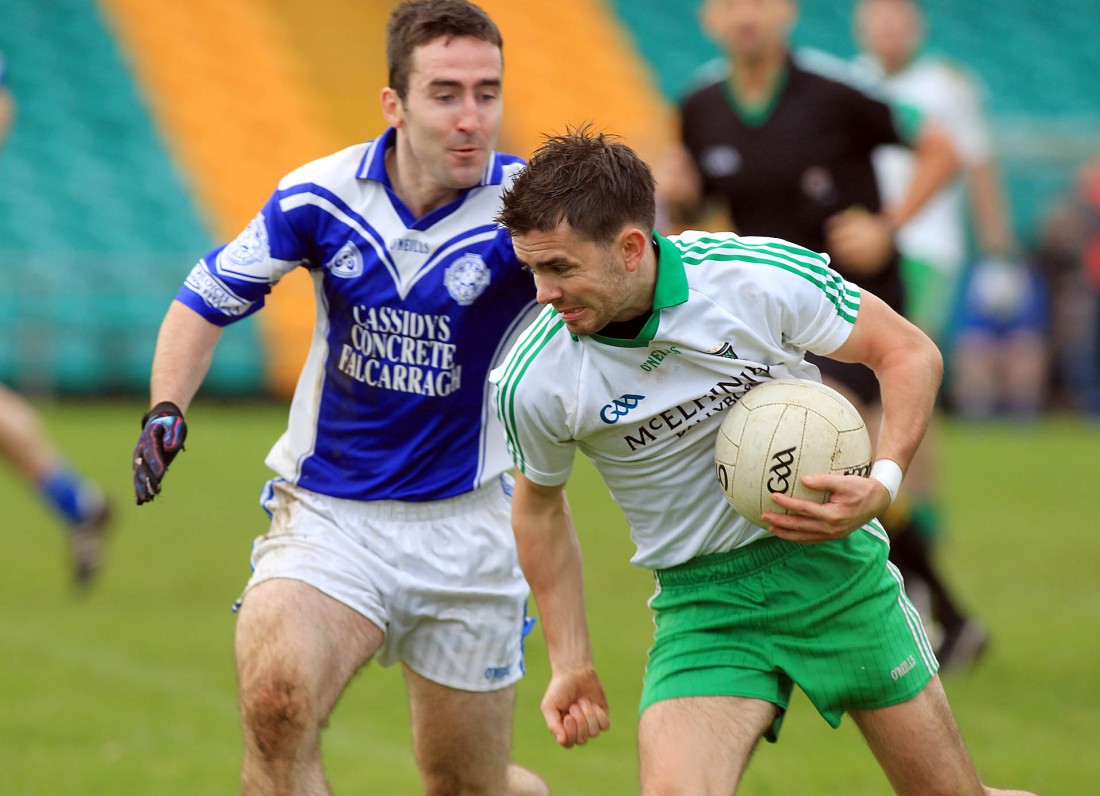 Brian Lafferty of MacCumhaills is challenged by Cloughaneely’s Conor McGee.

BRENDAN Dunleavy stood his players in a huddle for five minutes after their relegation play-off win over Cloughaneely on Saturday.
Their 0-14 to 1-6 win ensures that they’ll play Division 2 football next year.
With Martin O’Reilly, Steven O’Reilly, Shaun McGowan, Owen Wright and Darren O’Leary to the fore, MacCumhaills were fairly comfortable throughout.
“There is so much talent on that team that it would have been wrong for them to go down to Division 3,” said former Donegal star Dunleavy.
“We are very relieved. We believed in ourselves at the start of the year and we thought we’d have been pushing for promotion, rather than fighting relegation.
“The boys showed their quality. I have always talked about the level here.
“The experience of tight games when everything is at stake will do no harm. It’s like a Championship match and the better they’ll be for that experience.”
Dunleavy brings to and end his first year back in charge of the Twin Towns side, but has hinted that he’d like to remain at the helm in 2014.
He said: “It’s a big commitment, but I enjoyed every bit of this year.
“There are so many young, good players coming through and the future of Sean MacCumhaills looks very bright.”
There was also a pointer to the elder statesmen, Seamus McGinty and Pat McNulty. In the winter of his own career, Dunleavy would have watched a young defender by the name of Seamus McGinty rise through the ranks.
2013 was his 27th year in senior football – and he has the cut of a man who could be back
again when the cones are being set for pre-season.
Dunleavy said: “If you want role models, you look no further than Seamus McGinty and Pat McNulty for heart and commitment. They always look at the question, ‘what can I do?’ rather than bitching at someone else. Great examples.”