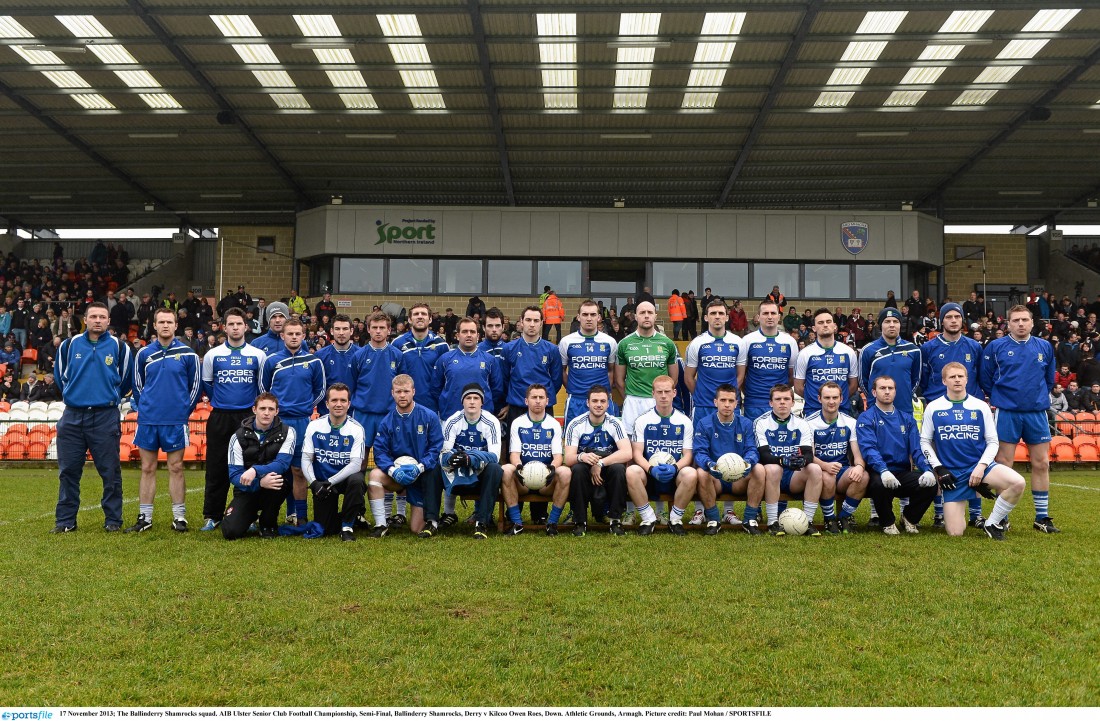 SHAMROCK Park is the hub of life in Ballinderry, and club devotion and loyalty is something that the men from South Derry take very seriously.

Last year, after Ballinderry outwitted Slaughtneil in the Derry senior County final, they were drawn against Tyrone side Errigal Ciaran in the Ulster Club Championship.

Errigal Ciaran, the club of Mickey Harte and Peter Canavan, had just won their first Senior Championship in six years and after dumping out Mullahoran from Cavan, they were due to face the kingpins of Derry football. But they had to do so without their manager, Ronan McGuckin.

McGuckin had transformed Errigal’s fortunes, but as a former Ballinderry player and captain, and son of club stalwart and renowned coach, Adrian McGuckin, he stepped aside from his role for one match, not prepared to mastermind the downfall of his own club.

McGuckin’s dileemna became a national story. How could he sit in the stands after giving total commitment to Errigal for the year?

But to McGuckin, it was an easy choice. Ballinderry was his club. The Shamrocks were engrained in his make-up and he had only missed three senior games in over 20 years. He couldn’t go up against his own club and he took a seat in the stand for the game.

Errigal Ciaran defeated Ballinderry in that match, and McGuckin rejoined the Tyrone men for the semi-final. The defeat was a devastating blow to Ballinderry. They went into the game as favourites, but they didn’t perform on the day.

Since then some of the Ballinderry players have admitted that the McGuckin episode upset their preparation. They had let it get into their heads, and were dumped out of the tournament as a result. Martin McKinless’ team had a chance of winning an Ulster title in their grasp, but they let it slip by. They are determined not to make the same mistake again this year.

If they were mentally weak in 2012, Ballinderry have shown no signs of complacency this term. They were uncompromising in their path to the the Derry senior title, winning their five games with ease, by an average winning margin of just under 11 points.

Glenullin, Kilrea and Lavey were all cast aside with minimum fuss, and even though Ballinascreen hit them for an early goal in the county final, McKinless’ side were never really in any danger, as they captured their third successive title.

Clonoe won many admirers for their attacking play in Tyrone, but the Shamrocks never allowed them to get into their stride in their preliminary clash.

The Monaghan champoions, Scotstown got as close to the South Derry men as anyone this year, losing by just a single point. Ballinderry were there for the taking that day, but McKinless’ team grinded out a win, in Glenswilly-fashion one might say.

Kilcoo from Down had dethroned the revered Crossmaglen Rangers and had their eyes fixated on Ulster glory, but Ballinderry crushed them in the early stages of the semi-final to set up a final against Glenswilly.

The Derry championship is supposedly one of the most competitive in Ireland,  but that’s not where Ballinderry have come unstuck. It is in Ulster where they have flattered to deceive over the last decade.

They won the Seamus McFerran Cup in 2001, and went on to win the All-Ireland Club title.But in the intervening years, they have struggled in the province.However, they believe that this is their year.

McKinless has been in charge of Ballinderry for five years now, and he has built a strong panel. Collie Devlin, Ryan Scott and Ryan Bell played inter-couty football for Derry this year, while Conleith Gilligan, Kevin McGuckin, James Conway and Michael McIver all wore the county jersey with distinction.

They have experienced wise heads, mixed in with youthful exhuberance. And they have depth. Enda Muldoon, one of the greatest Derry players of his generation got married during the summer, and went on his honeymoon for a few weeks. He hasn’t been able to get a starting position tin the team since.

Fintan Bell started at corner-forward for the Derr under 21s this year, but is resigned to a place on the bench. Reputation alone does not warrant autopmatic selection on the team.

If you look at their star-studded sidee, it’s difficult to see how they can be defeated. But, getting over the line is Ballinderry’s big problem.

They reached the Ulster Final twice in 2006 and 2008, but Crossmaglen proved too strong on both occassions.

Ballinderry’s younger players have supposedly brought fresh impetus to the team, but they too failed in the Ulster club under 21 final in Creggan last year against Bryansford from Down, after cruising through the tournament.

Their full-back line has come in for criticism throughout they year, but it has stood up so far. However, if it does have weaknesses, Glenswilly and Michael Murphy won’t be long in exploiting it.

Roonan McGuckin was prepared to stall his managerial career for his club last year, and his clubmates will be determined to do whatever it takes on Sunday.
Let the battle commence.