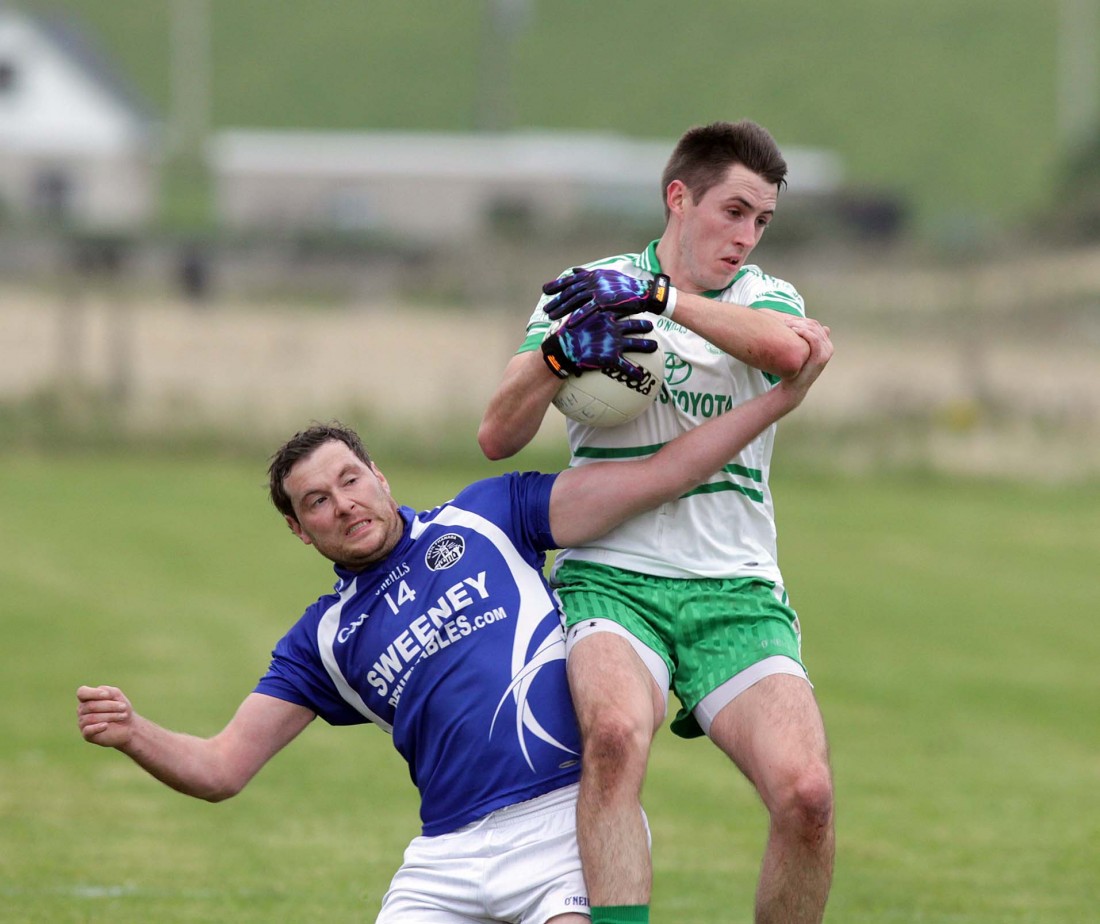 AS THE St Naul’s players are warming up on Sunday, keep an eye on the number 14’s kicking practice and bet your bottom dollar that his last one before throw-in will go wide.

Stephen Griffin doesn’t know why, but he always purposely kicks his last practice shot wide of the target before the St Naul’s captain jogs out for the toss. It’s become a bit of a ritual at this stage and he doesn’t see it ceasing ahead of Sunday’s Intermediate final with Naomh Muire.

“It’s something I find that helps my focus,” he says.

“I go for the toss knowing what’s happening and I’m ready to go.

“Before a game I only kick two or three frees, four at a maximum in the warm-up.

“I always kick a couple over the bar but my last one before I go for the toss I always purposely kick it wide. I don’t know why I do that. It’s something I’ve done for the last two or three years and I’m not planning to change it.”

Griffin is one of the most deadly marksmen in Donegal football. He’s a player who always plays with confidence for St Naul’s – and is aiming to shoot the lights out in Sunday’s final. He’ll just be back from a break in Portugal and will be well rested.

While his pre-match routine will end with an off-key effort, missing chances isn’t something that bugs him even in the heat of battle. He said: “It never bothers me if I miss a free in a game. You just have to step up and kick the next one. Every player, no matter who he is, will miss a free at some stage and you can’t be dwelling on your misses. You just have to keep stepping up and taking the responsibility.

“I wouldn’t do anything over the top in terms of preparation. In the last six weeks I’d do a bit extra, maybe go down to the pitch for an hour and knock about after work. That’d only be coming into the business end of the year though. Generally I’d take fifteen or twenty minutes before training or after training just to keep me sharp.”

Back in the spring, Griffin made one of the toughest calls he’s ever likely to. He’d been a member of the Donegal squad that won an NFL Division 2, two Ulster SFC titles and an All-Ireland under Jim McGuinness’s watch. With his competitive game time limited, Griffin pulled the plug – but he and St Naul’s have the best of Stephen Griffin now.

He said: “It has benefited me in that I’m playing games solidly all summer. Before, I’d have been missing a lot of games with the county training. It wasn’t fair on the boys either. They were losing games narrowly and I was sitting watching. It wasn’t doing anybody any good.

“The boys have been good to me since I made the decision to step away. They won the first five games and I was injured for those, but they showed from very early that they were willing to put in the big push to get us to where we wanted.”

Griffin missed the early part of the season because of a shoulder injury, but has returned to his deadly accurate best in recent times. The 25-year old forward hasn’t ruled out a return to the Donegal panel.

He said: “I felt at the time that I needed to come back and get games. Eighty per cent of the subs are getting no game time apart from in training.

“I just felt I had to leave it to get myself back up to where I was at a couple of years ago. Of course I’d like to go back at some stage. I need to improve my game overall, but hopefully the chance will come up for me again.”

Griffin flew back from Albufeira especially for last Saturday night’s All-County League Division 3 clash with Fanad Gaels on Saturday and a win helped secure the League title – and automatic promotion to Division 2.

“I made the call to come back Saturday morning and get back out on Saturday night or Sunday morning,” Griffin said.

“I only missed a day out here. We beat Fanad and won the League, which was more important to us. It’s great to have the League won before the Championship final.

“We have the League wrapped up and that pressure is off. We put a lot of emphasis and focus on the League this year. We put pressure on ourselves to get promoted and it was the big one for us. We have it in the bag now so the boys are really going gung-ho for the Championship.”

St Naul’s had to dig deep to avoid falling at the first hurdle in the Championship. The thin margins in these games were laid bare in Mountcharles.

Griffin said: “Against Carndonagh, we were leading by around five points with ten minutes to go in Mountcharles, but they were three up then after getting a couple of goals. We thought it was gone from us. We went down, got a penalty and that levelled us for a draw. That penalty was a big moment in our season.

“If we’d lost the home game against Carn we’d really have been going there under pressure.

“We knew that we had to win to keep our League form going. Staying in the Championship was important for that. It was massive for us.

“We’re happy with where we’re at. Everything is going good.”