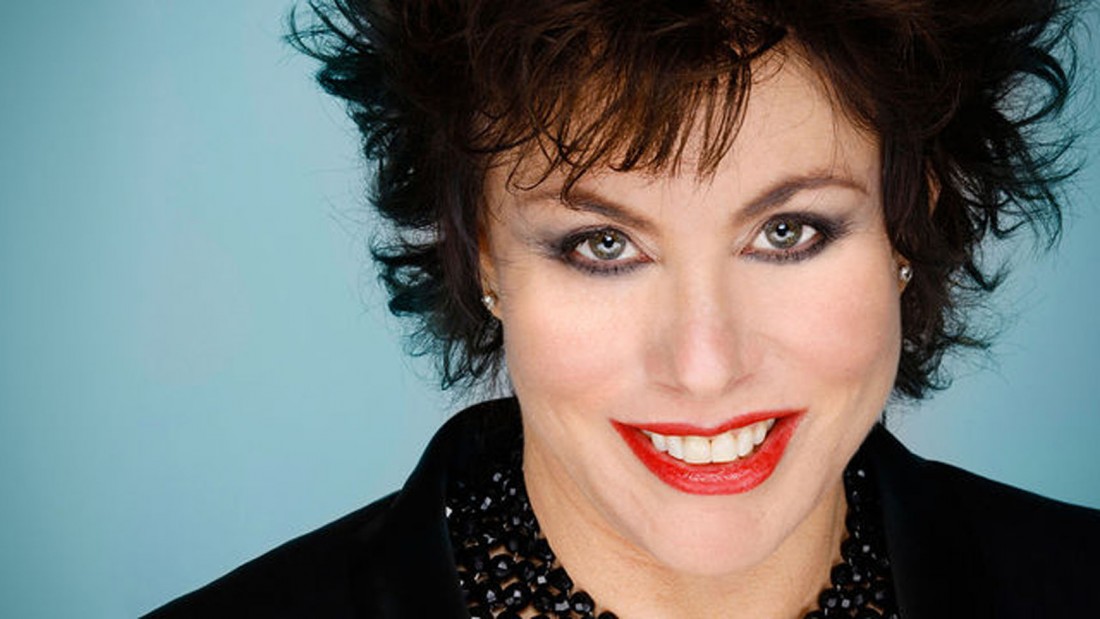 AN Grianán Theatre, Letterkenny, has just announced an incredible line-up of top comedians who will appear in the Cathedral town over the coming months. One of the biggest stars is the irrepressible force of nature that is internationally renowned comedian Ruby Wax who will be appearing at An Grianán on April 12.

Comedian, writer, mental health campaigner Ruby Wax shows us just how our minds can send us mad as our internal critics play on a permanent loop tape.
Ruby knows this only too well. She has been on a tough, but enlightening journey through depression which has taken her from The Priory through to an MA from Oxford University in Mindfulness-based Cognitive Therapy.
This show helps us all understand why we sabotage our sanity, how our brains work and how we can rewire our thinking to find calm in a frenetic world.
Helping you become the master, not the slave, of your mind, this show is your route to saner living.
‘Wax has an extraordinary mind, and she has brought it to bear with her trademark wit…a ruby beyond price’ says actor Stephen Fry.
And that’s not all. The theatre has a truly fantastic line up of comedy to keep you laughing right through to Easter.

Mark Thomas – 100 Acts of Minor Dissent
Mark Thomas, who appears at theatre on April 4, is well versed in the art of creative mayhem and over the years his troublemaking has changed laws, cost companies millions and annoyed those who most deserved it.
Now he returns to what he does best: mischief – joyously bad behaviour with a purpose.
After his award-winning show Bravo Figaro, Mark tasks himself with committing 100 Acts of Minor Dissent in the space of a year. Mark catalogues everything from the smallest and silliest gesture to the grandest confrontations and the results are subversive, hilarious, mainly legal and occasionally inspiring.

David O’Doherty Will Try to Fix Everything
David O’Doherty, the Ryanair James Bond, the Kevin McCloud of the tiny keyboard, former Miss Ireland, the offspring of Shannon/Pete Doherty, his new look is ‘Jaws era Steven Spielberg’, recipient of the 2008 Edinburgh Comedy Award and inventor of the last remaining swimming stroke ‘the squid’ (on back, feet first), has written a new comedy show with both talking and songs. He will be appearing at the theatre on Friday, March 14.

Neil Delamere – Smartbomb
Following his sold out performance last year Neil Delamere returns with a brilliant new show on Saturday, February 22.
Smartbomb sees the star of BBC’s The Blame Game and Fighting Talk and RTE’s The Panel explain Ireland’s recession, eye patches and email viruses. Probably not in that order.

Pat Shortt – I Am The Band
Fresh from his recent success as JonnyPateenMike in Martin McDonagh’s ‘The Cripple of Inishmaan’ alongside Harry Potter star Daniel Radcliffe in the West End, Pat Shortt is back for the final tour of his hit one man show ‘I am the Band’, a hilarious look at life on the back roads between Ireland’s dance halls, and a tribute to one of this country’s true music legends – Dixie Walsh. He will be coming to An Grianán Theatre on Saturday, January 11.

Tommy Tiernan – World Tour of Donegal
Tommy Tiernan’s father Kevin taught science and religion in the tech in Carndonagh in the late 60’s. How a man was able to straddle those two ideologies in 1960’s Ireland remains a mystery.
Following in his father’s footsteps, trying to contain as many conflicting opinions as he can within himself, TT takes to the hills and valleys of the county he was born in.
Expect a show full of stories gathered from his touring of both rural Ireland and the rest of the world.
Following his sold out tour of the islands this summer, Tommy’s Donegal tour will begin at An Grianán on Thursday, December 5.

The Nualas – Special Offer
To celebrate this fantastic season of comedy the theatre is running an extra special offer exclusively for the theatre’s e-newsletter recipients for Irish comedy trio The Nualas.
Get a whopping €5 off per ticket when you use the code ‘lovecomedy’.
You’ll hear Nuala favourites like ‘Manolo’ alongside fabulous all-new classics, such as ‘Sexy Farm Song’, and ‘Jesus, Mary, and Joseph, Why Am I So Fat?’.
Expect scintillating vocal harmony, ambitious choreography, bags of bling, and a night packed solid with craic, laughter, tears, and chat (not necessarily in that order).
Catch these fine ladies of Irish comedy this Saturday, October 26.

For further information or ticket bookings call the An Grianán Theatre box office on Tel 07491 20777 or log onto www.angrianan.com