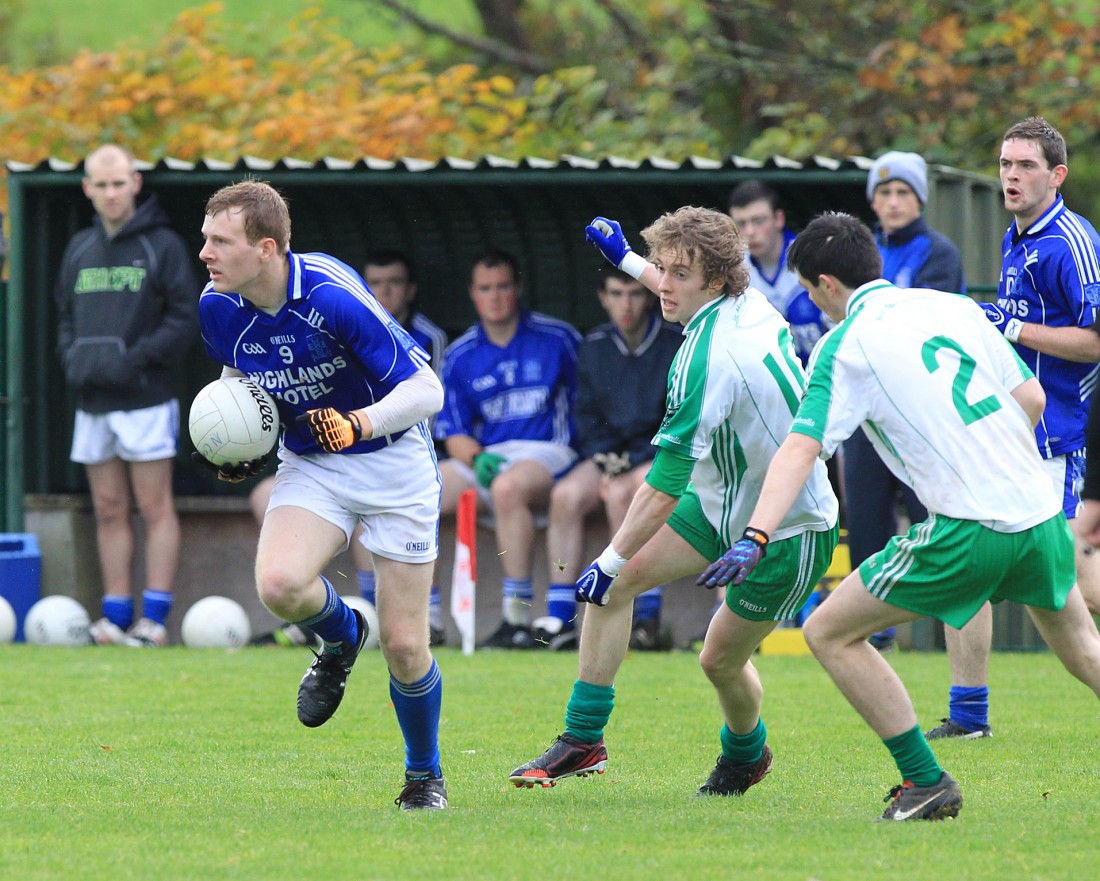 By Harry Walsh in Glenfin

THE production line which have been produced many, many talented young players at Davy Brennan Memorial Park over the past decade or so is showing no sign of seizing up – not just yet anyway.

In Glenfin on Saturday afternoon, Connie Doherty’s class of 2013 brushed aside the challenge of MacCumhaills to book a final meeting against either Kilcar or Four Masters in two weeks time.

It means that Naomh Conaill will be contesting an eighth successive U21 final – a remarkable achievement.

“The conveyor belt is working not too bad. If we can get another year or two out of some of these boys there’s another good crop coming behind them,” team manager Connie Doherty said.
“That’s our eighth final in a row but we like to win them,” he smiled.

Five wins out of the previous seven is no mean achievement but Doherty and his mentors are greedy for title number six.

“It’s great for these young fellas who don’t think of anything else other than football. It’s the players who are doing all the work at training and they’re now getting their rewards out on the pitch,” he said.

“While there’s fellas out there today with plenty of medals there are others who have won nothing yet and it’s important for them and the ones coming behind. It’s great to get to another final,” he said.

Leading by three points at the interval (1-7 to 1-4) Naomh Conaill continued to force the pace after the break although it would be the the last quarter before they finally pulled away, winning by nine in the end.

“In the last twenty minutes or so the experienced lads really stood up to the mark. I’m delighted for them,” Doherty said.

Played on slippery underfoot conditions on a wet afternoon, it was the men from the Twin Towns who opened the scoring through a Marty O’Reilly (free). Their sweeper Rory Dunleavy added a second but with John O’Malley (3) and Ciaran Thompson also finding their range Naomh Conaill led by double scores after ten minutes.

The game’s opening goal a few minutes later as a long ball into the danger area from midfielder Ryan Duffy caused confusion in the Naomh Conaill defence. Before they could react Noel Quinn blasted the ball into the net from Mark Dorrian’s knock down.

MacCumhaills Stephen Mulligan and Ciaran Brennan exchanged scores before Donagh O’Callaghan burst clear for Naomh Conaill only for Owen Gallen to make a brave save at his feet.

Two unanswered point from O’Malley, the second a superb score from play, levelled matters before the same player sent the MacCumhalls ‘keeper the wrong way from the penalty spot – awarded after Owen Wright brought Ciaran Thompson to the ground as he raced through on goal.

Two points from Mulligan, either side of half time, and another off the boot of Gavin Gallagher saw the sides locked on 1-7 apiece by the 40 minute mark before Naomh Conaill assumed control.

Quick fire points from O’Malley, Brennan, Thompson and O’Callaghan put them four to the good before they netted their second goal on 53 minutes.

Jamie Gallagher and O’Malley linked well before the ball was worked to Ciaran Thompson to finish off a fine team goal.

There was still time for Mark Gallagher and Thompson (2) to contribute three more scores while MacCumhaills only reply came from a Marty O’Reilly free.

The defending champions had fine performers in O’Malley, Hughie Gallagher, Donagh O’Callaghan, Thompson and man of the match Ciaran Brennan. Stephen Mulligan proved to be MacCumhaills most dangerous player on the day, with four points, while Gavin Gallagher and Marty O’Reilly never stopped running, albeit with limited success against a well drilled, well disciplined Glenties team.