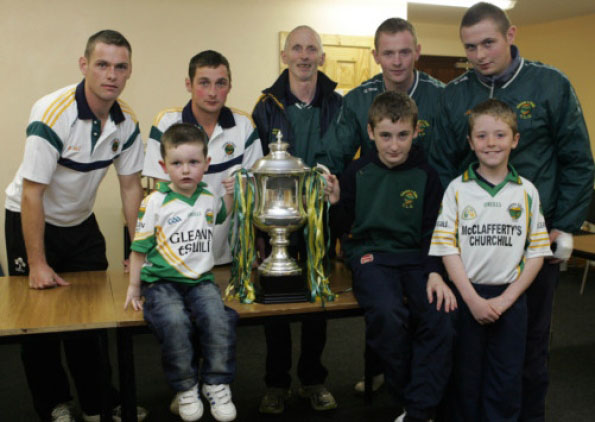 The McGinley family with the Dr Maguire in 2011.

MARTIN McGinley might be based 10,000 miles away in Perth, Australia these days – but missing Sunday’s county final between his native Glenswilly and Killybegs was never really an option.

From a family that bleeds Glenswilly, the thought of having to sit with an ear to crackling coverage on a laptop didn’t even enter his mind.

Two years ago, he played the final 18 minutes in the county final as Glenswilly won the Dr Maguire Cup for the first time, beating St Michael’s. This Sunday, he’ll watch on from the stand at MacCumhaill Park as the Glenmen go in search of Donegal football’s biggest prize. Along with his young son, Oisin, Martin returned home on Saturday.

A son of John ‘Corny’ and Mary McGinley, Martin has been neck-deep in Glenswilly from a young age. John senior, who was Glenswilly’s joint-manager alongside Gary McDaid in 2011, has four sons – and Sunday will be a big day for the family again. Two of the boys, Darren and Dermot, are members of the Glenswilly panel, while another, Johnny, is manager Gary McDaid’s right-hand man.

“Having Martin home from Australia only shows how important the club is to our whole family,” Johnny said.

“Sunday will be another memorable day for us all and another victory will be hugely welcomed. It would mean so much to us all.”

Johnny played as a sub in 2007 when Glenswilly first contested the final, losing to derby foes St Eunan’s. His dad had stepped into the breach in late 2009 and managed the team to a county semi-final the following year, before he was joined at the helm by McDaid for 2011, with Johnny also on board in the backroom team as a selector.

“This year I suppose I’m trying to fill his boots which is no easy task,” Johnny said.

“The club’s been a huge part of my life for as long as I can remember. The passion for the club was inherited in our house and has become steadily more important to me as the years go on. This year it’s on my mind 90 per cent of the time and I hope my own boys (Patrick and Sean) continue to keep up the passion for it.”

John McGinley was there for the foundation of the Glenswilly club in 1981 and won a Junior B Championship in 1984. Previously, he played for St Eunan’s and Termon, winning a Junior Championship with Termon in 1974, returning from Scotland for the final. He spent most of his twenties in Glasgow, which he says is one of his biggest regrets as it meant he missed out on his most important footballing years.

“It was more fighting than football over there,” he said.

It was only when he was in his late 40s that he hung up the boots, and even then it was ‘reluctantly’.

For a man so engraved in the fabric of the club, 2011 was an emotional experience.

“I never imagined Glenswilly being involved in a senior final in my lifetime,” he said. “Words couldn’t describe it; it meant the world. I remember the club starting off, with only a handful of players, so to get to winning a senior championship was unbelievable.”

John was diagnosed with cancer a couple of years ago and emotions had already been high in the McGinley house.

“Dad’s sickness probably did bring a strong bond among the team, and I think it instilled an even stronger desire in the players to succeed. The family appreciated that greatly,” Johnny said.

“The triumph on the day of the final was a welcome distraction from the illness. That day will live long in our memories for all the right reasons.”

The McGinleys are ready for the big day again and the invitation for Dr Maguire at Seacor in Breenagh remains open.