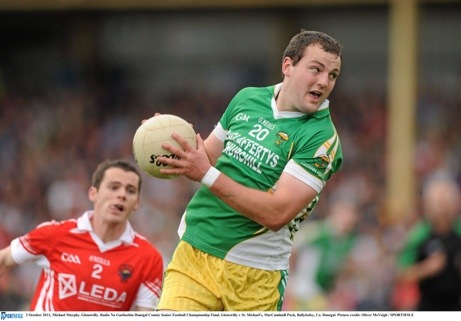 THE Donegal CCC has decided against moving the SFC final away from Sunday October 20th, with the game going ahead as originally planned.

The decision means something of a fixtures dilemma for Michael Murphy.

His club, Glenswilly, are due to take on Killybegs in the final, which will be played less than 24 hours
after the first International Rules test between Ireland and Australia at Kingspan Breffni Park, Cavan.

Donegal star Murphy has been selected as the Irish captain and is expected to line out against the Aussies in Cavan.

There had been some hope that the Donegal decider could have been moved to avoid placing the 24-year old into a quandary.

At Monday night’s meeting of the Donegal County Committee, the Glenswilly club called for the Ulster Club Championship game involving the Donegal champions to be moved from November 3rd.

A request was tabled by the Donegal Secretary Aodh Máirtín Ó Fearraigh, but this was subsequently withdrawn following receipt of further correspondence from Glenswilly.

Murphy’s club suggested that the final be played on Friday night October 25th, the day before the second International Rules test in Dublin. The Donegal CCC decided against this option and ruled that the game goes ahead on Sunday-week at 4pm in Ballybofey.

“Donegal CCC have today considered a request from CLG Glenswilly to reschedule the 2013 County Senior Championship Final. Having considered all the major factors involved, the CCC has concluded that the final will go ahead as planned on Sunday October 20th,” a statement released by the Donegal County Board read.

“We fully understand and appreciate CLG Glenswilly’s desire to accommodate their player and Donegal captain Michael Murphy but regrettably no practical solution that would resolve all the associated difficulties surrounding the current circumstances has presented itself.

“The CCC would however like to wish Michael Murphy and the Ireland team every success in the International Rules Series.”

On Monday night, the Donegal manager Jim McGuinness had expressed the hope that Murphy would avoid playing piggy in the middle between club and country.

“Hopefully things can work out for Michael,” McGuinness said. “He’s in fine fettle and we just hope he gets the right opportunity to show what he’s capable of.”