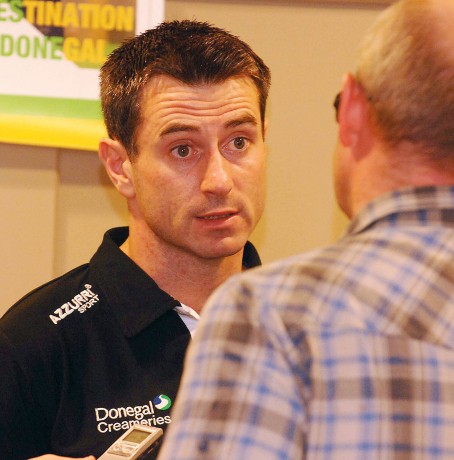 The Kilcar man worked under Gallagher and Jim McGuinness in 2011, after being coaxed out of retirement by McGuinness upon his appointment.

On Hegarty’s first night back, he wondered what would greet him as he drove the long and winding road back to Castlefin.

Upon entering the gates of Páirc Eiméid, Hegarty was knocked back. Leaning against a wall inside the ground was a familiar face. A smile crossed the faces of both men, but Hegarty wondered quietly to himself: ‘What the Hell’s he up to?’

Their paths had crossed only infrequently, but when they did football was the talk on the lips. Gallagher was renowned as a studious football man. Introduced to McGuinness by mutual friend Martin McHugh, the pair hit it off.

That frosty night in January 2011, it soon became apparent to Hegarty what Gallagher was ‘up to’.

“Rory was very hands on, even on that night of his first session,” Hegarty says.

“From day one, Rory wasted no time. He really got stuck in. Around half an hour into that first session, we knew we’d struck gold in getting Rory Gallagher on board.”

News this week that the Fermanagh man was no long part of the Donegal management has rocked Donegal.

Whether it was by his own accord or Jim McGuinness’s, Donegal have lost a man Hegarty describes as ‘the missing piece’.

He says: “Rory was a massive part of what Donegal were about this last three years. He brought so much to the table.

“When Jim was putting the jigsaw together, Rory was the missing piece.

“He was a massive influence on the players.

“He was such an intelligent player himself and he brought that intelligence, and more, to the Donegal dressing room.”
Gallagher’s tactical nous was said to be his greatest trait.

Mention to him the most obscure inter-county footballer and Gallagher could respond with an encyclopaedic analysis of that player’s strengths and weaknesses – right down to the hand with which he’d bounce a ball – and, in some cases, he even predicted, correctly, the changes that would be made during games.

“He was like that even with Donegal in that he knew who the good players were; the ones who’d make the difference,” says Hegarty.

“He was an outside man and had no preference for one player or the other.

“He was able to pin point things in the opposition, but these were things that you just wouldn’t think about.”

Gallagher was about much more than an assistant manager in Donegal.
Since Jim McGuinness took up his role at Celtic FC last autumn, Gallagher has been dealing with most of the media requirements, outside of the official press days.

Gallagher was the point of contact to the Donegal footballers from the outside world and was often, especially in the weeks leading up to games, the man to whom the media would turn for injury bulletins and the like. The phone call from this office was as regular as clockwork on Thursday mornings. Each time, without fail, Gallagher answered and was courteous, but cautious with the information being relayed.

Gallagher had a solid working relationship with the Donegal media with whom he built a professional rapport over the last three years.

Within the squad, Gallagher was also seen as a go-to man. Players who felt fatigued and wished for a little pardon would have knocked on Gallagher’s door; players who had perhaps pre-planned events that clashed with a training session would first have visited Gallagher.

Those who have been close to the set-up estimate, conservatively, that Gallagher would have dedicated a 30-hour week to Donegal, on top of holding down a full-time job already.

He and McGuinness would speak for hours on end about all things football. Gallagher’s input into conditioning programmes, training schedules and recovery went beyond that of the traditional ‘selector’.

At training, his influence was vast. He and McGuinness would have the players split in two groups who would compete against one another.

It fostered an ultra-competitive mind-set in the camp, but the meeting of these strong minds caused the earth in Donegal to move this week.

To many, it appeared as if Gallagher hadn’t got ‘credit’. At Donegal’s annual banquet last year, 34 Celtic Crosses were handed out. Jim McGuinness was presented with one, as was each member of his 33-man panel. Significantly, Gallagher did not receive one and was known to be aggrieved at what he saw at the time as a snub.

With McGuinness’s schedule at Celtic reported to have got busier, there will be more onus on Gallagher’s replacement. Included within McGuinness’s roadmap for 2014 was the requirement for more hours from his lieutenants.

Already with a demanding schedule with Donegal – around 30 hours a week, it is estimate by those close to the set-up – Gallagher and his wife have one young child with another on the way in December. Gallagher also has a busy workload as the manager of the SuperValu store in Killybegs.

McGuinness and Donegal are in search of someone who, like Gallagher, will be more than an ‘assistant’.

“It’s a massive shock,” says Hegarty. “I find it hard to see them getting someone of that calibre again to push them forward. Rory did so much so well.”