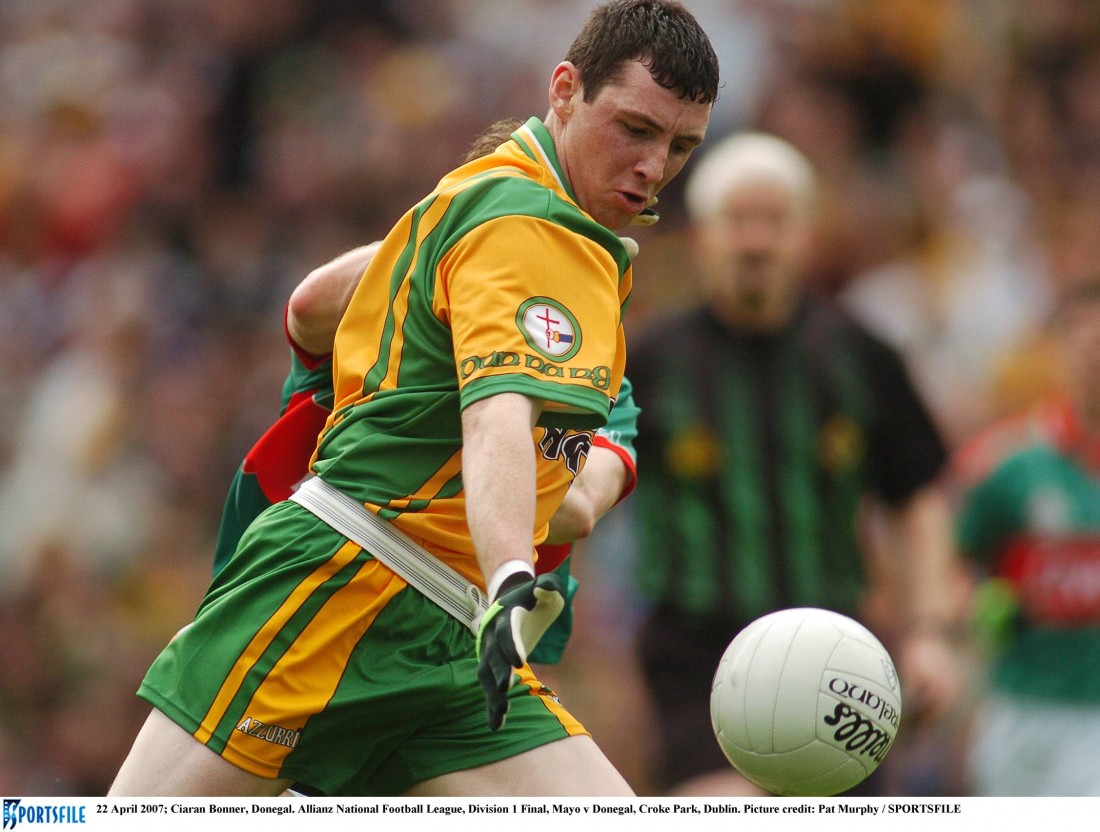 CIARAN Bonner and Leon Thompson are among the ‘new’ faces to have been drafted into Jim McGuinness’s Donegal senior football squad, while Christy Toye is also in line for a return to action in 2014.

Glenswilly’s Bonner, Naomh Conaill’s Thompson and St Michael’s man Toye have been included in an extended panel by McGuinness that will undergo a winter of work before the numbers will be trimmed ahead of the 2014 National Football League campaign.

McGuinness held a get together with his squad and their new backroom team on Saturday in Letterkenny, where Bonner and Thompson were the high-profile new inclusions, with Toye also in attendance having missed the entire 2013 season through illness.

Toye’s last competitive appearance for Donegal was as a substitute in the 2012 All-Ireland final win over Mayo.

Neither Bonner nor Thompson has played for the county since 2009. Bonner’s last appearance for the county was the 2009 Ulster Championship defeat by Antrim in Ballybofey. The Glenswilly man was subsequently axed by John Joe Doherty for an alleged breach of discipline and he hasn’t featured in Donegal colours in the intervening four campaigns.

Bonner has been influential for his club, Glenswilly, in recent times, though, and the player – comfortable at midfield or in the forward division – has now been given a chance to rekindle his Donegal career.

So, too, has Thompson, who has not played for Donegal since the League in ’09. Both he and Bonner were members of the 2007 National League Division 1 winning squad and have been among the top footballers in the club scene in recent seasons.

There have also been recalls for Antoin McFadden (St Michael’s) and Thomas McKinley (Naomh Colmcille), two other members of the 2012 All-Ireland winning squad, who were cut in the early stages of the 2013 season.

Ardara man Conor Classon is another who is back in the fold having been in and around the fringes of McGuinness’s panel over the last couple of years. Classon was a member of the Donegal Under 21 panel in 2010 that won the Ulster Championship and reached the All-Ireland final.

There are also newcomers in the form of Killybegs’ Hugh McFadden, Malin’s Stephen McLaughlin and Buncrana’s Darach O’Connor.

McFadden scored 2-4 in Killybegs’ Senior Championship quarter-final win over Sean MacCumhaills and has been given the call by McGuinness. McFadden can operate at midfield or at full-forward.

McLaughlin is one of the exciting talents at Malin and has been one of the stars of their march to the SFC semi-finals. The wing-forward is joined on the newcomers list by Buncrana’s O’Connor, who was the captain of the Donegal minors in 2013 and who was also a member of the Donegal Under 21 side.

O’Connor is a son of former Roscommon star John ‘Jigger’ O’Connor and recently led Buncrana to glory in the Donegal Minor Championship.

Absent from the gathering on Saturday were Ryan Bradley and Ross Wherity, who have emigrated in recent weeks, but McGuinness has not given up hope of a return for either or both half-forwards before the turn of the calendar.

Saturday’s was the first chance for the panel to meet the new backroom team of Damian Diver, Paul McGonigle and John Duffy, whose appointments were confirmed last Wednesday afternoon. It was the beginning of their planning for the new season and work will really get underway after the draw for the 2014 Championship takes place this Thursday evening. The draws are televised on RTE Two from 7pm.