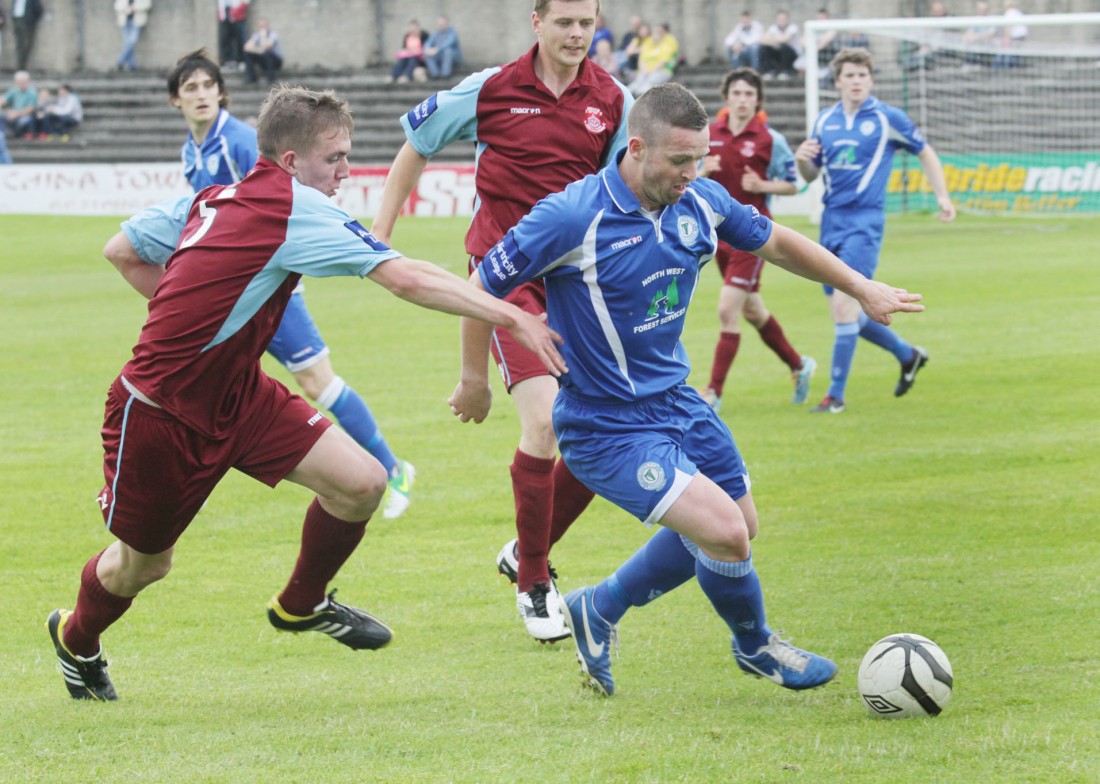 Kevin McHugh in action against Cobh Ramblers earlier this season.

NOBODY needs to explain the importance of the FAI Cup to Finn Harps striker Kevin McHugh. The Killea man was a youngster in the squad when Harps last reached the final back in 1999 and he knows all about the buzz a cup bring can bring.

“Some of the younger players are probably tired of hearing me talk about it now, but I’ve been telling them of that cup run and trying to get them to realise that if we can keep going in the cup then we will get the supporters behind us.”

In those glory days thousands trekked three times to Dublin before Bray eventually made off the silverware, nowadays the Harps faithful have whittled down to a few hundred.

“It is sometimes hard to take and I know it is happening across the league. The players are putting in a huge effort and at the start of the year when we were going well we were getting some good crowds but perhaps that’s when you don’t need the supporters behind you as much. Sometimes it’s when the form is dipping that you need the extra boost from the crowd and it’s disappointing to see the numbers drop so much.”

The Harps manager Peter Hutton had urged people to come out and get behind the team for last weekend’s game against Waterford, but after that disappointing result McHugh says the players really don’t have an option this weekend but to go for a win.

“This is our season now. We have to go for the win and in fairness to Cobh they have to do the same. Nobody wants a replay and this will be a real cup tie, an open game with both teams going for the win.”

The problem, he suggests, is that having played Cobh three times already in the league, the two teams know each other so well.

“When you are in the cup you want a home tie first and to get a draw against another Division One team gives us a great chance to progress but playing each other so many times is one of the things that is wrong with Division One, it can sometimes all get a bit stale and boring.”

Harps have to meet Cobh again in the league after the cup clash, but the cup game is the one that has the opportunity for both teams to keep their season alive and interesting.

“In recent seasons we gave so much focus on trying to get up and out of Division One that we were gone from the cup, this time we were just as focused and we are bitterly disappointed after last weekend but at least we have the cup game now and we need to win it to keep this season alive.”

The Harps striker has tasted cup success during his time at Derry City, securing a winners medal after the 2006 win over St. Pat’s in which current boss Peter Hutton netted in injury time for the Candystripes, but he’d love nothing more than to add to that with Harps.

“It’s a cup game and with the squad we have we know that on our day in a one-off we are capable of beating anybody but that has to start this weekend against Cobh.”