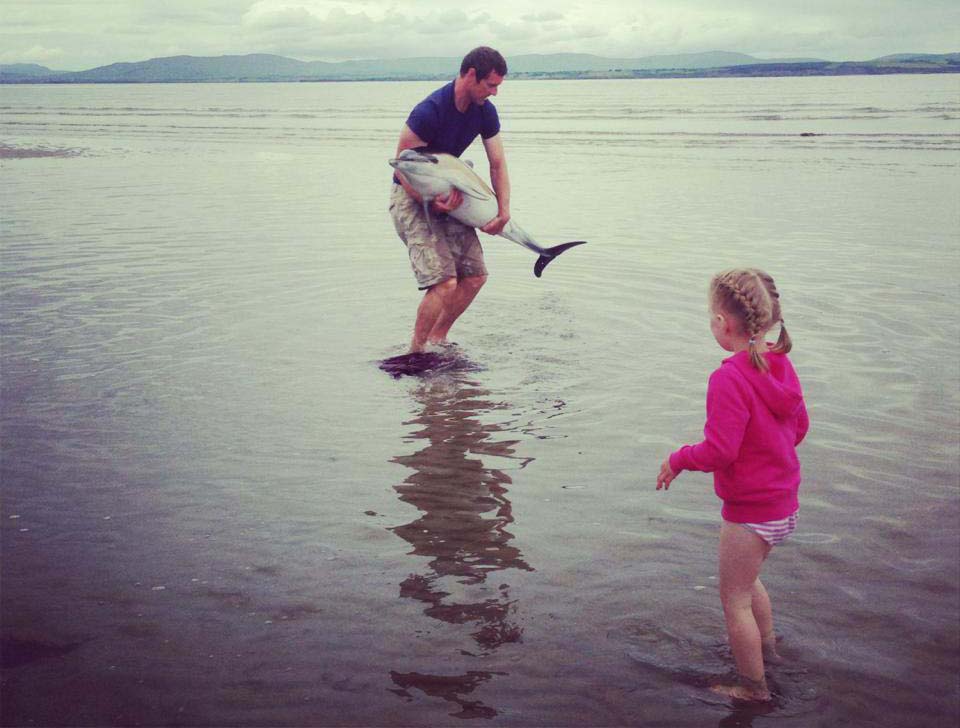 Dan saves the dolphin near Rossnowlagh.

BY MARK MCKELVEY
A BEACHED dolphin which was only moments from death was saved thanks to the swift actions of a Tyrone family who were on holiday in Donegal last week.
When Dan McElroy from Killyclogher discovered the marine mammal on a beach he thought it was dead before it made a desperate gasp for air. According to Dan, his four-year-old daughter Evie then co-ordinated the rescue mission.

She instructed her father what to do, as her mother Lorna captured amazing footage of the rescue on her phone while holding their one-year-old son Franky.
The rescue attempt, which lasted over two hours, took place last Tuesday afternoon at Manor Park, a bay just up the coast from Rossnowlagh.

Dan, who now lives in Bolton, said, “I was out with the family with the nets rock pooling when I noticed what seemed to be a perfect fin in the distance.
beach. “It appeared almost shark like on the beach. I ran a good 400 metres to get a closer look and discovered it was in fact a dolphin.

“It was covered in flies and completely dry by that stage. I thought it was dead, but when I touched it a breathing hole opened scaring the life out of me.
“It was completely stricken on sand so I carried it into the shallow water as quickly as I could to get it wet, but that wasn’t going to suffice.
“My daughter Evie was shouting at me to carry it into the sea. She ran the show and was telling her daddy exactly what to do.”

By this stage of the rescue a group of people had formed on the beach. They had binoculars and noticed three other dolphins visible a few hundred metres out to sea.
Dan continued, “The stricken dolphin was rejuvenating very slowly. I held it for a good few minutes before it started moving.

“It was swimming around slowly for quite a while before it had the energy to get up to a good pace, but always staying around the shallows.
“I was joined by a couple of guys in the water and we swam around with the dolphin for a good two hours trying to coax it out, but it kept coming back in.
“Thankfully it then just suddenly took off. We hope that the dolphin headed off and met up with its family. This was a happy ending to a very freak encounter.

“I had never seen a dolphin in my life,” he added. “It weighed between 40 to 50kg. It was like a big heavy sack of rubber, but breathed like a human and that was very weird. It was a lovely family memory that will stay with us for a long time.”