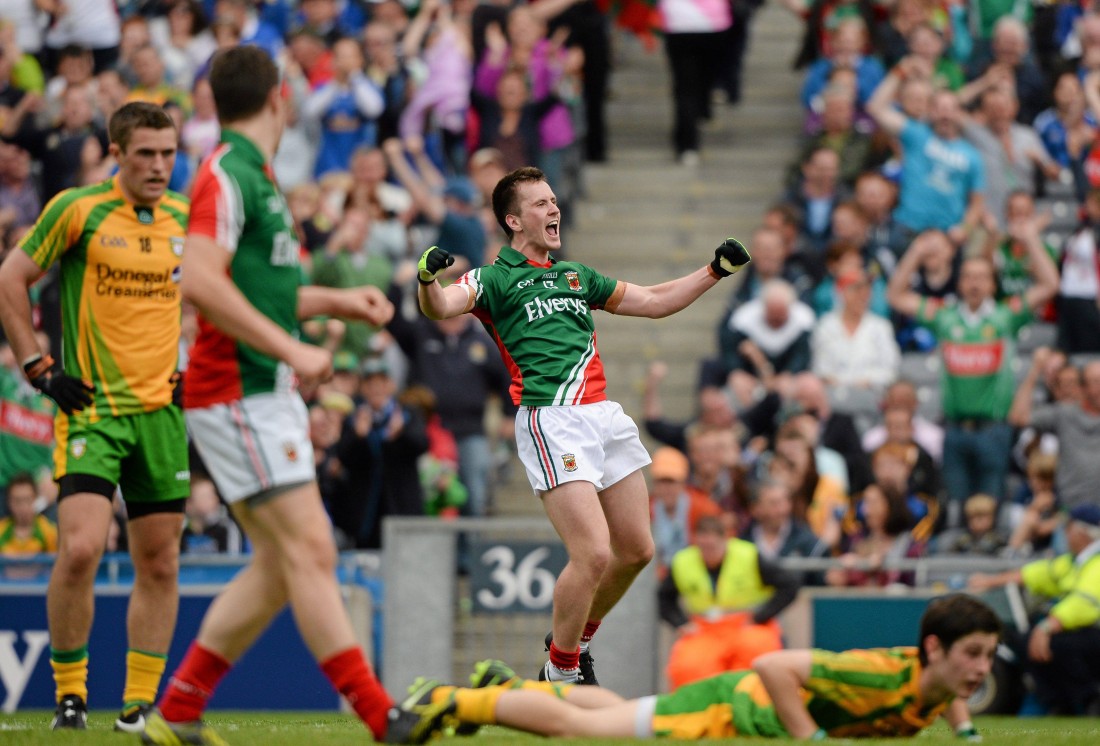 Donegal’s Ryan McHugh lies on the ground as Cillian O’Connor celebrates after scoring his third and Mayo’s fourth goal.

THE scoreline is one that will ring loudly in Donegal for quite some time.

Not since 1946 has a Donegal team felt the pang of a 16-point loss in Championship football. The scary thing here was that this could have been worse – much worse.

But for the 1-4 they scored in the final ten minutes, Donegal were heading for a defeat that was not too far away from their record Championship defeat – the 23-point hammering (5-12 to 0-4) by Cavan in 1939.

Under Jim McGuinness, Donegal had only conceded four goals previously in Championship football over three seasons.

Yesterday, Mayo sliced through them at will. Cillian O’Connor helped himself to a hat-trick and Donal Vaughan netted another on a day when James Horan’s side ruthlessly exposed the frailties which have dethroned Donegal as Ulster and All-Ireland kings.

In the space of three weeks, Donegal have relinquished their hold on the Anglo-Celt and Sam Maguire.

It wasn’t the defeat that hurt here, but more so the manner of it. Mayo blew Donegal apart with Aidan O’Shea lord and master around the middle third and the deadly Cillian O’Connor scoring 3-4.

Donegal were somewhat fortunate to have been ‘only’ 12 in arrears at the break. Mark McHugh prevented a certain goal when he blocked from O’Connor, while Mayo really ought to have added a third in the final minute of the half.

Sub Cathal Carolan broke through and beat Paul Durcan with a well-drilled low shot that cannoned off the post. Kevin McLoughlin, somehow, skewed the rebound wide with the Canal End net gaping at his mercy.

O’Shea was sent off late in the day having collected a second yellow card, but it shouldn’t take away from a top-class display. Donegal defender Eamon McGee was also sent to the line in the 52nd minute for a stamp on Enda Varley.

It was that sort of day.

Donegal’s injury problems have been mounting for some time now. Mark McHugh started yesterday and contributed two points, but Karl Lacey had been kept to a watching brief, though the 2012 Footballer of the Year was called upon with just 23 minutes gone here and the Four Masters man was showing clear signs of a man who remains some way off his optimum.

Jaded Donegal came in on the back of a qualifier win over Laois that they’d hoped had ignited the spark. Being drawn against Mayo for a repeat of the All-Ireland final was a surefire thing to get the blood boiling – and after a week of slogging in the media the camps were set for a real war of attrition.

But Mayo did unto Donegal what Donegal had inflicted on them in September – and worse. O’Connor and Donal Vaughan scored two goals inside the opening 13 minutes and from there Donegal were facing a mountain.

Michael Murphy landed a free in the 16th minute that was Donegal’s fourth score of the day, but Donegal wouldn’t register again until the 48th minute – by which time Mayo were twenty points to the good.

Murphy was Donegal’s top marksman with six points as Mayo’s tenacious tackling was suberb and they kept Patrick McBrearty scoreless and held Colm McFadden blank until he finally hit a goal in the 69th minute.

By contrast, Mayo had thirteen different scorers and only three points of their impressive tally came from placed balls.

Vaughan was everywhere in the early exchanges and it was he who provided the assists for the opening two points, scored by O’Connor and Alan Dillon. The warning signs were posted to the floor in the third minute when Mayo went in search of goal, a long ball into Alan Freeman cut out by the deftest of touches by Paul Durcan.

In the fifth minute, Mayo bagged the opener as Eamon McGee was forced into a turnover and Kevin McLoughlin fed O’Connor who was cool, calm and collected as he rolled into the bottom corner.

Freeman added a point and, with six minutes gone, Mayo held a six-point lead. It was a start akin to that of Monaghan in the Ulster final. Like then, Donegal didn’t recover.

Murphy scored two frees either side of a Mark McHugh point to get Donegal underway, but Mayo hit the sucker-punch when Donegal were cut open in the 13th minute. Durcan had to come well off his line, but was beaten to the ball and Vaughan smashed home.

Donegal just couldn’t get going and they were rattled as McLoughlin, Andy Moran, Freeman and two from O’Connor widened the margin by the minute before wing-back Colm Boyle got up to put twelve between them at the short whistle (2-10 to 0-4).

The interval will have been an interesting time between the four walls of the Donegal dressing room. Mayo’s was a whirlwind that Donegal just couldn’t live with, as the tired legs and weary minds began to show.

Seamus O’Shea arched over the opening score of the second half and any hopes of a Donegal comeback were jolted within ten minutes of the re-start. Vaughan broke again in the 40th minute and lifted past the advancing Durcan for O’Connor to finish.

Durcan might have been beaten four times, but he was one player who could hold the head high here with a fine save denying Lee Keegan another Mayo goal a minute later.

It wasn’t long before Mayo were in for a fourth, though, O’Connor smashing home after Moran was denied by a strong-handed save by Durcan. It was the Ballintubber man’s second hat-trick in as many games having also netted three times against London in the Connacht final.

When Eamon McGee saw red in the 52nd minute it was perhaps the epitomy of the frustrating afternoon that was.

David Walsh stemmed the tide momentarily with a point and it was only late on when Donegal found a way through. It was much too little, much too late, however.

Murphy, twice, McHugh and Lacey hit points, but Lee Keegan capped a fine afternoon when he clipped over to complete Mayo’s scoring. McFadden powered home a goal in the final minute, but it was scant consolation for a side who were dethroned in some fashion.

For the third year in a row, Mayo have taken the scalp of the All-Ireland champions – but here was their credentials for a first All-Ireland since 1951 laid down.

For Donegal, the defeat will surely leave a long and bitter taste in many mouths. The reign is over – and to reign supreme again there will be any amount of answers to some searching questions to be found.

The wine suddenly hasn’t become water again, but Donegal ran into many problems that face defending All-Ireland winners and couldn’t rectify them.

Where to now remains the million-dollar question.