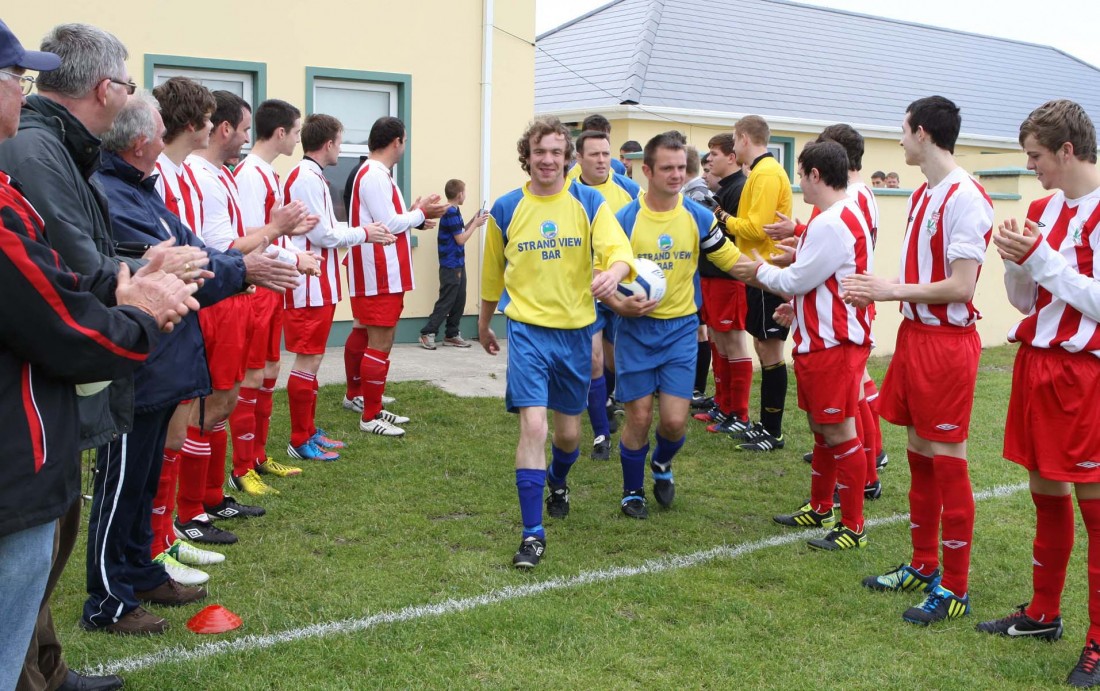 The officials and players of Keadue Rovers form a guard of honour at Strand Park, Maghery to welcome new club Strand Rovers to the Donegal Junior League on Sunday afternoon. Photo: Gary Foy

BY LIAM PORTER AT STRAND PARK

TWO goals in the first half from Keadue Rovers were enough to spoil the party in Maghery yesterday as Strand Rovers began life in the Donegal League with defeat, but Stephen Barrett’s troops did battle gamely to the end and on this showing they’ll have nothing to fear in the Saturday League.

Neither side boasted their strongest possible line-up, but the game did give an opportunity for others to stake their place in the side and there were some decent performances from both teams.

Strand were always going to be up against it. Allowed into the league on condition that their player pool was not drawn from players in existing clubs, they hadn’t quite the measure of the pace of the game, especially in the early stages.

But having weathered, not an entirely battering storm in the opening few minutes, they grew more and more into the game and defended gamely to ensure that even though Keadue had lots of possession, they didn’t have that many chances.

Those they had though were good ones and the visitors might have gone ahead after just a minute when Daniel Rodgers raced on to a through ball but fluffed his shot that was easily saved by Kevin McGovern.

Rodgers again came close for Keadue in the 6th minute. This time Packie McGonagle cut the Strand defence open with a precise pass, but once again the Keadue striker was denied by McGovern.

The chances in fairness were fair enough return for a game the visitors had dominated in the opening exchanges but there was plenty of hope for the home side and the home support thought they’d even broken the deadlock in the 9th minute.

Instead Darragh Hanlon’s fierce shot from just outside the box was tipped around the post by Keadue keeper Christopher McGlynn, the rustle of the side-netting as the shot flew past causing a flutter of excitement among some of the home supporters who thought the ball had found its way into the bottom corner.

It wasn’t a goal but certainly was a signal that Strand had potential to cause problems and they came close in spectacular fashion again in the 11th minute when Hanlon’s overhead kick was tipped over the bar by McGlynn.

Keadue were having all the ball, but in terms of chances it was all even until the 26th minute when a clever ball from the impressive David Sweeney found Adam Neely in the box and he smashed the ball home from 12 yards to give Keadue the lead.

They might have doubled that advantage in the 29th minute only to be denied by the inside of the post and then another cross from Sweeney was steered towards goal by Rodgers but somehow hacked off the line.

Rodgers then had a header saved from a corner as the pressure began to build on Strand and eventually they cracked. Luke Neely was hauled down in the box and having been denied on several occasions Rodgers finally found the net when he smashed home the penalty.

The raiding full-back Hugh Moy had the chance to extend Keadue’s lead before the break when he was allowed to run unchallenged into the box, but the defender hurried his shot and drove it into the side-netting as another opportunity went

In many respects the half-time lead was always going to be enough to see Keadue through this one and with Strand working hard to shut the visitors down in the second half but not really offering the same attacking threat, the start of the second half was a bit of a damp squib.

Twenty minutes had elapsed in the second period before the first shot of note, Ryan Green firing across the face of goal. A minute later Luke Neely shot just wide and Green then forced McGovern into a good save as the visitors turned the screw again.

But there was still the odd flurry of attacking prowess from Strand and it took a brilliant double save from Christopher McGlynn to deny Brendan Glackin finding the net for Strand.

However when a goal did come it was the visitors again who were celebrating. This time Rodgers turned provider with a superb cross from the right and Green nipped in at the back post to head powerfully past Kevin McGovern.

Strand pushed for even a consolation goal in the dying minutes, but it wasn’t to be for the league’s new boys who have tasted their first action but will have to wait for their first goal and indeed first victory.