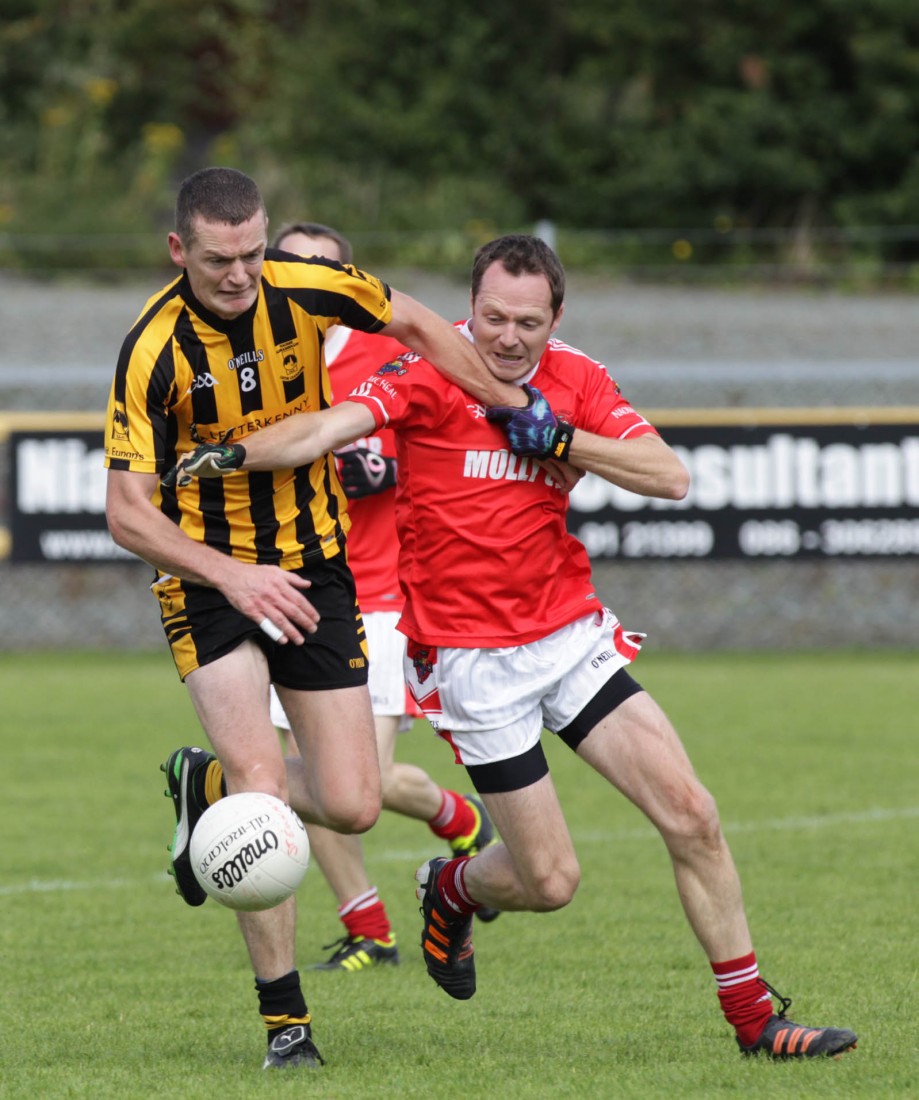 IT WAS all too easy for St Eunan’s as they scored a facile win over depleted St Michael’s at O’Donnell Park yesterday.

The reigning double winners had built up a whopping eighteen-point lead by the break with Donnacha Gallagher bagging a brace of goals after Lee McMonagle netted in the eighth minute.

Gallagher, a former Sligo senior panellist, top scored with 2-5 as the understrength St Michael’s were overwhelmed.

Second half goals by Daniel McLaughlin and Peter Witherow got St Michael’s a small measure of redemption but, overall, it’s not a day for the Bridge boys to dwell upon.

Eddie Harkin had barely the bones of a skeleton side with them to Letterkenny and it wasn’t long before their dominance was rammed home.

Although All-Ireland winner Rory Kavanagh began on the bench, Eunan’s had a side littered with experience and medals.

St Michael’s, by contrast, were thin on the ground with Colm McFadden, Michael Gallagher, Gerard Gallagher, Christy Toye, Stephen Black and Brian McLaughlin among their absentees, as well as the Stateside contingent of Antoin McFadden, Michael McGinley and Andrew Kelly.
Gallagher sailed over two early points before the opening goal arrived in the eighth minute, McMonagle palming home after Kevin Rafferty had been denied by Ciaran Gallagher.

With the dam burst it wasn’t long before Eunan’s gushed through in waves again, with Gallagher latching onto Eamon Doherty’s pass to finish in style.

Sean Hensey, Conall Dunne, Darragh Mulgrew (2), Rafferty and John Haran all added points before the close of play in the opening half.

Four minutes before the break, Eunan’s added a third goal when Gallagher’s crisp drive beat his namesake in the St Michael’s goal after Conor Parke, Kieran Sharkey and Haran did the approach work.

But for ‘keeper Gallagher, St Michael’s could have been further behind. St Eunan’s engineered seven goal chances in the one-sided opening period, but Gallagher made a strong save to deny Dunne, before also keeping out close-range efforts by Ross Wherity and Haran. On top of that, Thomas O’Donnell hooked off the line from Sean McVeigh’s early attempt.

Stephen Coyle shot over St Michael’s first score three minutes into the second half and the Creeslough-Dunfanaghy side managed to get in for two goals.

First, Daniel McLaughlin powered home after Martin McElhinney cut a swath through the Eunan’s defence. And McElhinney was involved again for their second as a neat piece of inter-play with McLaughlin enabled Peter Witherow to convert.

But St Eunan’s continued to insert the knife. The black and amber ended the afternoon with nine players on the scoresheet as Dunne, Mulgrew, Rafferty and Hensey bagged points with Kavanagh coming in for the final 15 minutes to add a fisted effort.

Man of the Match Gallagher kept his own fine tally going, too, with two neat points from play to take him onto a total of 2-5.

Sean McVeigh added the final point of the game when he slotted over in the last minute.

St Eunan’s are a team on a mission. Post-match, manager Eamon O’Boyle and trainer Pat McNabb put their players through a rigorous workout that was certainly sterner than the preceding hour.