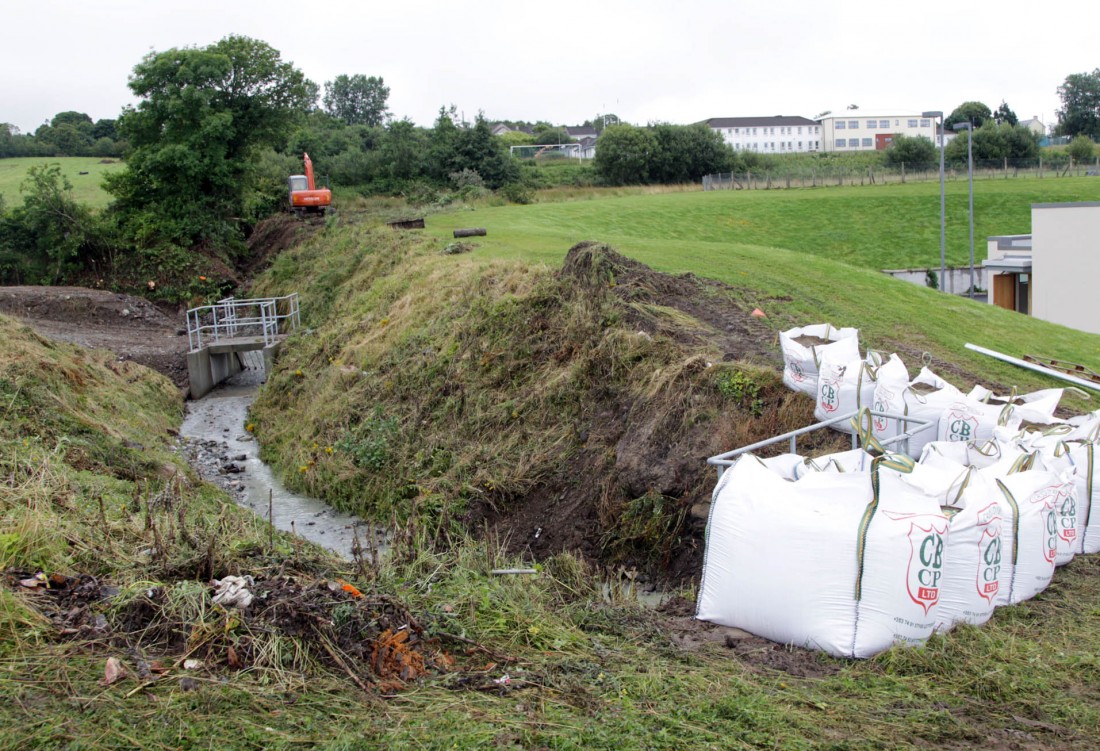 Sandbags in preparation of further heavy rainfall at the stream above the hospital. Photo: Donna McBride

By Kate Heaney
THE flooding crisis at Letterkenny General Hospital which has left Donegal without an Emergency Department will cost at least €10 million to repair, the Donegal News can reveal.
The possibility of the new Emergency building and sections of the older hospital having to be demolished could lead to multiples of that cost.

Never before in the history of the State has a hospital been devastated to such an extent.

The question on everyone’s lips in Donegal this week is why was this was allowed to happen when the history of flooding on the site was well known?

The granting of planning permission for the new €22 million Emergency unit was conditional on a Flood Report being provided for the site.
The Donegal News tried, but had been unable to get sight of the planning file at the time of going to press.

The building flooded in December 2011 before it was opened and talk among staff at the new unit was that it would flood again.

Forty per cent of the entire hospital campus was rendered inoperable after Friday’s flood. The waters that entered the new emergency unit from the blocked gully above the site, became mixed with sewage, ran through onto the first floor of the main hospital building causing devastation as it flowed onto lower levels.

Millions of euro in medical equipment has been destroyed, thousands of patient files soaked in contaminated water, walls and floors contaminated and the hospital only able to offer extremely limited services for the people of the county.

Critical facilities such as X-ray and CT scanners have been destroyed which Manager Mr Sean Murphy described as essential facilities for modern medicine.

Maternity, Gynaecology, Paediatric, Chemotherapy, Dialysis and limited Psychiatric  admissions are operating, but the majority of the rest of the hospital services are out, including the kitchens.

Local businesses helped, over the weekend, to provide food for staff and patients as the hospital’s kitchen was rendered useless.

By Tuesday, catering at the hospital was coming from County Mayo and from next week, the mobile kitchens used for the G8 summit in Fermanagh will be brought to LGH.

Altnagelvin in Derry and Sligo Hospitals are taking emergency patients from Donegal with the Coastguard helicopter on standby 24/7 to evacuate emergency cases.

In the case of a life threatening emergency a patient can be brought by the ambulance service to LGH to be stabilised and then transferred to another hospital.

Staff from LGH are being asked to go to Altnagelvin to assist their already hard pressed staff.
On Thursday, a mobile CT scanner arrived in Letterkenny and a mobile Radiology unit is also due with the aim a temporary A&E can be established in the old Ward 3 of the main hospital by this weekend.

Oncologist Senator John Crown, after speaking with colleagues said the new building may have to be demolished completely.

At a press briefing on Tuesday Mr Murphy did not rule out that part of the hospital built in the 1960s possibly having to be demolished because contamination had “seeped into the walls”.

The Donegal News contacted the lead architects for the new Emergency building, Todd Architects who are based in Titanic House in Belfast, requesting information on flood planning for the new building. At the time of going to press no response had been received.

It would appear that after the flood of the unoccupied new building in December 2011, a new galvanised grid was put over the spot where the burn or stream is culverted underground on the north west corner of the site.

Last Friday when workers went to that grid it was found to be blocked with a gas bottle, toys and footballs amongst other items.

At Tuesday’s press briefing HSE Communications Director Paul Connors declined to speculate on the fact the remedial actions taken back in December 2011 had obviously not worked.

Mr Murphy  was full of praise for his staff, emergency services and volunteers who assisted. He pointed out that Dr Anne Flood had a temporary Coronary Care unit set up within minutes of the new one being flooded. He also praised the staff who managed to evacuate patients without mishap in just 90 minutes.