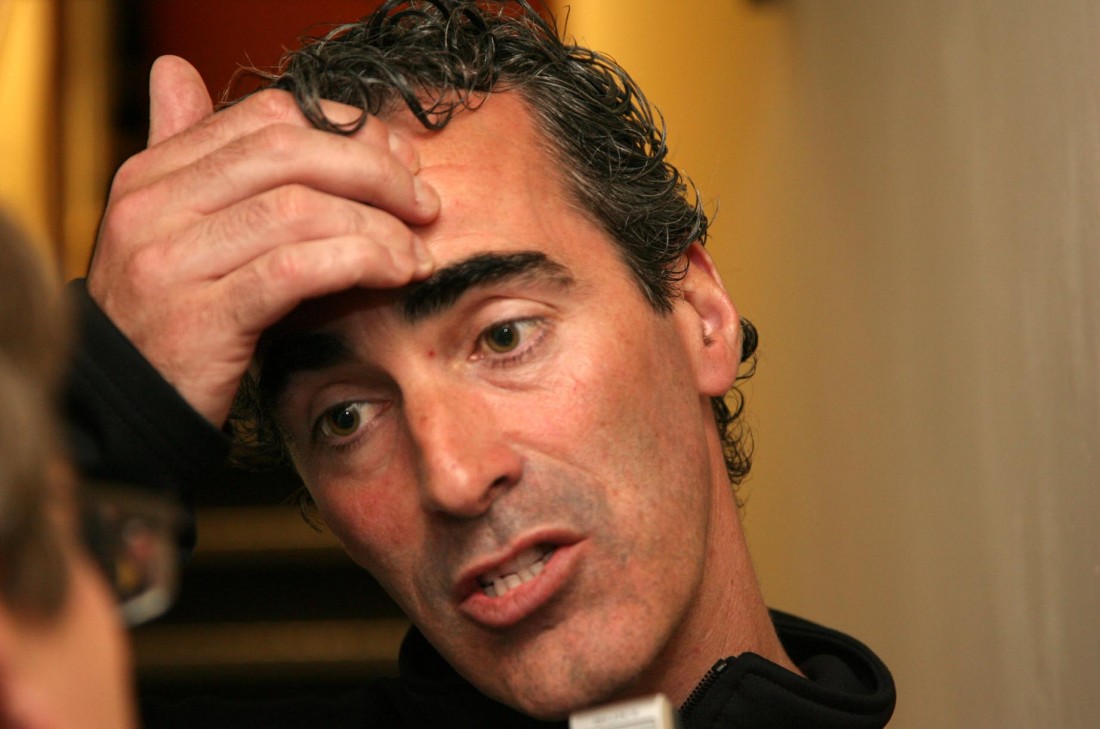 It’s fair to say that since he took over as Donegal Senior football team manager in 2010 much has been said and written about Jim McGuinness and so it continues into the second half of 2013 as we anxiously await on him to decide his future with the Donegal team.

Much has changed on and off the pitch since his appointment three years ago and those matters have to be considered by him before he decides on his future. That deliberation period began immediately after the defeat by Mayo in the All-Ireland quarter final earlier this month.

There is no great panic – time wise – with regard to Jim’s final decision on the matter as the inter county season has ended for Donegal and it will be January 2014 before they play their next competitive match.

However, should Jim decide to step down then it is only fair that the new manager is given time to put his plans in place – something I’m sure Jim is well aware of.

Last weekend Jim met the players and the County Bard with some sections of the press even suggesting that he would make his intentions known during his appearance on the BBC Championship programme on Sunday afternoon.

That didn’t happen but no one should be surprised because that’s not his style and the issue was far too important for Jim to tell a wider audience before those who await most anxiously his decision.
There’s no doubt that factors such as family and his position at Glasgow Celtic are now much more in the equation than they were three years ago and rightly so.

Whether you’re a manager, member of the backroom team or player the sport is so much more intense nowadays. Indeed, you might say that it’s professional, despite the fact that it’s still called an amateur sport.

Looking at things from the outside can be tricky at the best of times but over the last three years it would appear that Donegal have put in place the highest quality people and systems. You don’t win Ulster and All-Ireland titles otherwise.

Jim owes us nothing. He has given us all three amazing years of excitement and smiles and has put back pride back in for those lucky enough to wear the jersey and the many, many supporters who follow the county team.

Jim must now do what’s best for him and his family.

He has to put his family first and foremost. We would expect nothing less. His job at Celtic must come next because it’s his living and will provide for him and his family into the future and then comes the job of managing Donegal footballers.

His role as Donegal team manager was never going to be a long term thing and when he took it in he told us all that it was for four years – believing that it would take that time to sort things out.
He got that part of it wrong because success came much quicker and well beyond expectations. What has happened since is that expectations increased further still and when they were not fulfilled it seemed as if our world had fallen apart.

It hasn’t and, despite a disappointing year, it’s important to remember what’s gone before. We still managed to win three out of five Championship games this year – that’s 15 wins out of 18 in three years.

I want Jim to stay on but only if Jim wants to stay on. The players and the County Board all want him to stay on because we’re all greedy for more thrills and spills in 2014.

That said, it’s time for us all to take a step back and give Jim the time and space he needs to reflect and review what has been discussed between him and the County Board in recent days.

You know that we all want you to stay Jim but the only thing that really matters here is what you want to do yourself.

After Mayo’s win over Tyrone last weekend, aided and abetted by a dismal performance from referee Maurice Deegan, Dublin lock horns with the Kingdom in the second of this year’s Senior Football Championship semi finals.

Interestingly, Kerry have dropped Kieran Donaghy which means that they’re probably going for pace more than power in the forward line. That would appear to be a good plan as the Dublin full back line don’t look too comfortable against pace and in the two O’Sullivan’s and James O’Donoghue, they’ll get plenty of that.

Killian Young is a huge loss for Kerry but it begs the question why was he allowed to play in a club game the week before an All Ireland semi final. It was a risk which Kerry may well regret taking.

I’m not sure if Dublin are as good as all the hype surrounding them would suggest. It could well be a really close game and if that’s the case it could go either way.

Good on you Harps

When Cobh Ramblers scored a late, late equalising goal in their FAI Cup game against Finn Harps in Ballybofey last Friday night it was easy to think that Harps interest in this year’s competition had ended.

With Peter Hutton’s team facing a long trip to St Colman’s Park I have to admit that it crossed my mind that they might have been better had they been beaten on the night rather than facing two trips to Cobh in six days. Ye of little faith I reprimanded myself on Monday night.

Goals from Kevin McHugh and Lee Toland gave Harps a 2-0 lead at the break. Things got better when Cobh had two men sent off before Paul McVeigh and Michael Funston rounded off the scoring.

Great credit to the players who spent most of Monday sitting in a coach on the way to Cork. They didn’t feel sorry for themselves after Friday night and came home with a 4-0 win.

They may have been spurred on by the fact that they knew they quarter final draw – a home game against Drogheda United – before taking to the pitch.

Hopefully many of those who used to attend Finn Park on a regular basis will go to that game in a few weeks time. The players showed their commitment t the club on Monday night. Wouldn’t it be great if they were rewarded with a big crowd for a cup quarter final against Drogheda.

It was good to see Ramelton’s Barry McNamee get back on the scoresheet as Derry City beat Bluebell United in their cup replay on Tuesday night. That sets them up for a huge quarter final meeting with Sligo Rovers at the Showgrounds.

I’m also happy to report to clubs appeared to be winning their battles over player power earlier in the week.

Gareth Bale refused to train with Spurs because they had yet to accept a deal from Real Madrid, Wayne Rooney has decided that he will not now ask for a transfer away from Manchester United while Dean Sturridge’s form has Liverpool supporters asking the question Who is Luis Suarez? It’s good to see manners being put on all three.