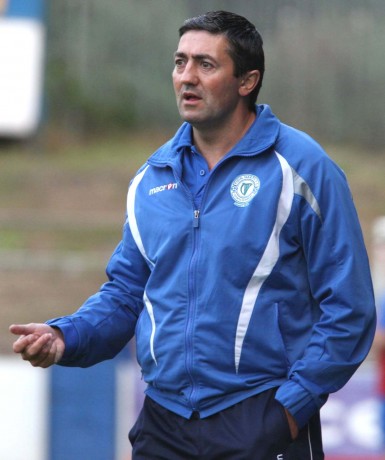 BY CHRIS MCNULTY
SEASON 2013 begun with so much promise, but somewhere along the line Finn Harps found themselves stuck in something of a rut.
As the season enters its final quarter this week, the Ballybofey side remain hopeful of clawing the deficit to those magical and mysterious promotion play-off spots they so badly crave.
Having shown enough in the previous three quarters of the campaign to suggest they’re capable of mounting a climb, Harps manager Peter Hutton has challenged his side to rid themselves of any fear heading into the home straight in what has been his first full season solely at the helm.
“The players have to be fearless now,” Hutton said.
“They have to go, apply themselves and give a really good account of themselves.
“What will be will be then. We can’t go into games now being anxious or nervous. We have to go for the jugular in terms of getting results.
“It’s more about getting the points on the board come the business end of the season. Irrespective of performances, we need points.
“We’re running out of games, but Waterford starts the final run around. It’s about getting points now.”
Seven games remain for Harps to attempt to prise their way into the reckoning and on Friday-week they host Cobh in Ballybofey in a game that offers an FAI Cup quarter-final spot for the victors.
Hutton said: “They’re all must win.
“As the old cliche goes: They’re all cup finals.
“When you’re winning matches now, you’re clawing away at the teams above you and putting distance between you and those below you.
“While draws would be ok, it’s about getting wins now.”
Mark Forker’s brace got Harps over the line against Salthill – and back on track following a narrow defeat to Athlone a week earlier.
The manager said: “This was very much a must-win game for us to stay in touch with those above us. It gives everyone a real lift.
“We came away from Athlone with a very good performance, but we didn’t take chances and got punished by the one really good chance they had.”
Friday night was a mirror of Harps’ season in many ways. They led from the outset, but it was only when Forker drilled home the second that the Finn Park faithful could exhale in relief.
Hutton said: “We got our noses in front, were playing fairly well and creating chances.
“We didn’t capitalise on those chances and it’s still always on a knife edge at one-nil. Ciaran Gallagher kept us ahead with a few decent saves.
“Second-half, then, we were much better – we had more discipline, we held our shape.
“We could have won by a greater margin.”
Chance creation and deliver from the flanks has been a cause of concern for Harps of late, but Lee Toland offered a bright point to this end with some tantalising crosses from the left-hand side on Friday night.
Said Hutton of his new addition from Kildrum Tigers: “Lee gives us good balance. He is a natural left-back, but he likes to get forward as well, so himself and Ciaran (Coll) link well. The two of them can dovetail on the left. It was an opportune time to blood Lee as he’s done well in training.”
Hutton has been busy with transfers lately and has plenty of options for the last seven games of the campaign with American Pat McCann also showing up well in the last two games.
Hutton said: “It is fairly competitive to get into the starting eleven. I’m sure there’ll be disappointed boys on the bench.
“That’s what you want – competition for places to kick everyone on. I’d like to think that everyone remains positive and we’re all pushing for places.”
Fellow play-off hopeful Waterford United visit Ballybofey on Friday. For Harps, victory is the only target – by whichever means necessary.
Hutton said: “It’s a huge game.
“We have to be up for it. Waterford are going really well and have spent what cash they have on a few quality players. They’re on a great run and have momentum. They’ll be a tough opposition.”