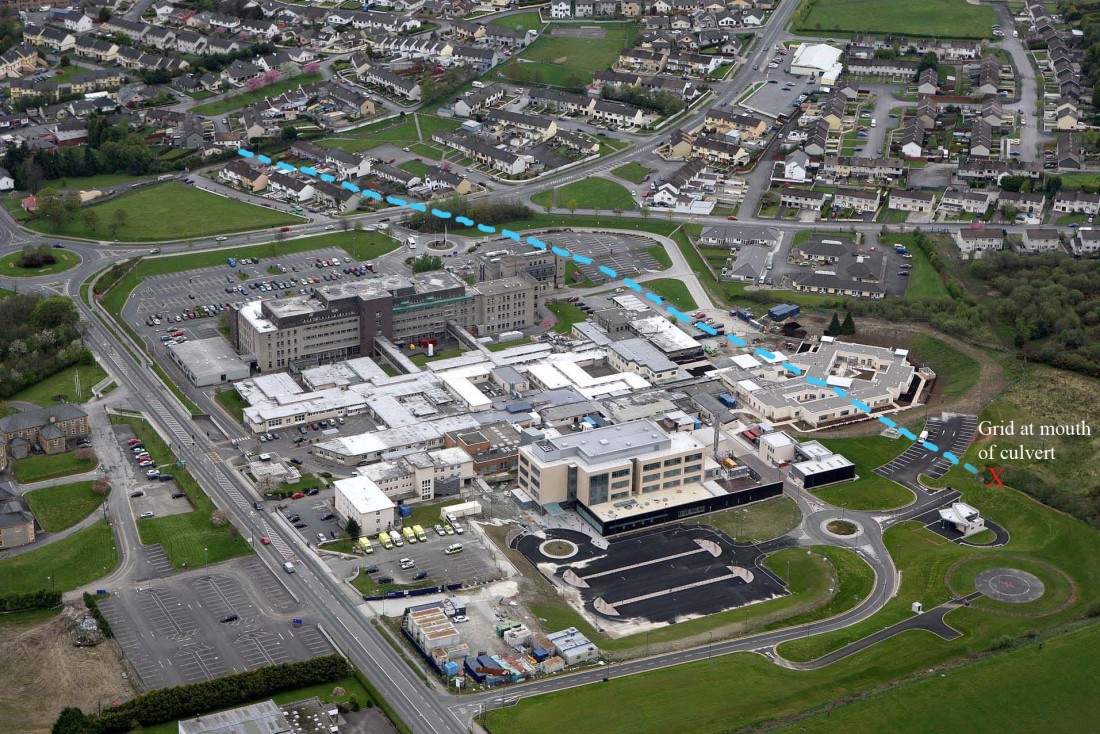 An aerial view of LGH, with the new Emergency Department in the foreground. The red ‘X’ marks the location of the mouth of the culvert which blocked, causing the stream to overflow down into the new €22 million ED. The broken blue line shows where the stream is piped under the hospital site, including the new Psychiatric Unit. Picture: Declan Doherty

By Cronan Scanlon and Kate Heaney

THE HSE, planning authorities and the Department of the Environment knew there was a serious flooding threat at Letterkenny General Hospital for at least ten years, the Donegal News can reveal.

A condition of planning for the new €22 million Emergency Department was that, prior to commencement, flood “attenuation” measures were to be agreed in writing with the Letterkenny Town Engineer, but were not.

A flood report for Letterkenny Town, commissioned and paid for by Donegal County Council would appear to have been ignored.

Repeated attempts following the flood to view the planning file failed, because it had been “misplaced”, according to a official.

However, by Wednesday of this week, the council advised that the planning file was online and provided a link to it.

The Donegal News, having already viewed the file online, requested sight of the planning condition document which is not online.

The council responded on Wednesday saying “’In order to protect due process and the proper investigation of this event by the relevant authorities, the planning authority is not in a position to comment further at this time”.

When this paper pointed out we were not looking for a comment, just sight of the document, a senior council official told the Donegal News yesterday that this condition of planning had not been fulfilled – “it was never submitted” – the attenuation measures were never received in writing by the Town Engineer.

The council official expressed the view that attenuation measures condition would not have had “any bearing “ on what happened two weeks ago as these measures would have applied downstream of where the flood happened.

Meanwhile, the Letterkenny Localised Flood Study, commissioned by Donegal County Council back in 2002, and seen by this paper, highlighted concerns about the ‘silting’ at the end of a culvert which runs underneath the hospital grounds from the point where the flooding occurred.

The 2002 flooding report also raised the issue of an inadequate ‘trash screen’ at the mouth of the culvert where the flood happened.

A record from a Letterkenny Town Council meeting held in January 2006 also stated: “River overflows its banks once every three years after heavy rain. The hospital is liable to flood.”

The Town Council granted planning permission for the new Emergency Department building in 2008.

Local Town Councillor, Tom Crossan, said  the last flooding of the Emergency Department in December 2011 should have sounded alarm bells. The mortuary also flooded in 1998.