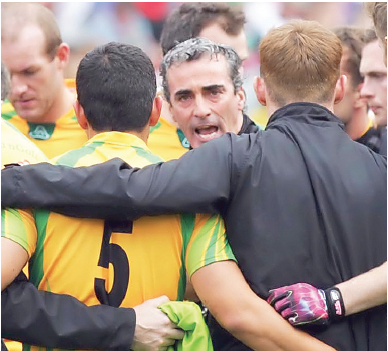 Donegal manager Jim McGuinness speaking to his squad before throw-in.

AS always happens in the wake of a defeat at the business end of the season in any team sport there’ll be speculation as to what the manager might do in relation to their future and speculation about what senior players might do.

So it was after Donegal’s big defeat to Mayo at Croke Park on Sunday. The questions started quickly: Would Jim McGuinness stay on or would other commitments with work and family mean he’d say it was time to step away from his role as manager of the 2012 All-Ireland champions? Perhaps that fact could be a deciding factor for Jim as he considers his options.

All-Ireland champions in 2012, but heavily and decisively beaten at the quarter-final stage in 2013, the defeat by Mayo ended what has been a fantastic time since McGuinness took command. Three Ulster final appearances and back-to-back wins for the first time, three All-Ireland quarterfinals with two wins and two All-Ireland semi-finals.

Of course there was also the biggest prize of all – victory in an All-Ireland final. 18 games played, 15 won and 3 lost makes impressive reading for any team and this Donegal team and its management owe their brilliant supporters not a thing. It would be easy for Jim to say ‘I came I saw and I conquered and now its time to move on’ – or would it be so easy?

He looked as shell-shocked as anyone by the manner of the defeat and may feel that it isn’t the way he wants it to end. His four-year plan got ahead of itself from early on and still has a year to run, which perhaps gives an opportunity to regroup and plan ahead for a campaign in 2014, without of course the burden of champions being over them – and all that goes along with those titles.

We might wonder did Donegal peak too soon? Was the Tyrone game so big that it effected everything that came after it? Certainly the team has looked more than a bit jaded at times, but that can be as much a psychological thing as a physical one. Injuries from the start to key players like Karl Lacey, Mark McHugh and Neil Gallagher didn’t help.

A number of others failed to find the form that helped us become All-Ireland champions. Other teams were more hungry for success and, in the case of Monaghan and Mayo, they had more to prove than Donegal had. It would be great to think that all involved would give it one more year and not go out on the note we witnessed last weekend.

Division 2 will give an opportunity to try new players who maybe will fit in and suit the system, with less pressure than Division 1 would offer. Mind you, with Down, Monaghan, Armagh, Meath, Laois, Louth and Galway in the mix, that won’t be easy. If everyone stays on, perhaps some of the more experienced players could be rested and kept fresh for the Championship.

This squad has given us a brilliant trip over the last three years. For that they should be thanked and having supported them so brilliantly since 2011 now is not the time to raise questions about either their ability or their commitment. It’s a time to step back, take stock of where everyone is at and base opinion on that.

Three Ulster titles out of four would be a good target for 2014 and take it on from there. Hopefully they’ll all be back.

I LIKE Joe Brolly a lot. He’s great company and a decent guy. He knows his football too. Last Saturday after Tyrone beat Monaghan in the All- Ireland quarter-final, Joe lost the plot a bit in the RTE studio.

He didn’t like the way Tyrone played and was particularly scathing in his criticism of Sean Cavanagh. The Tyrone midfielder denied Conor McManus a clear goal by dragging him down outside the large parallelogram.

A goal or a red card for Cavanagh could have changed the result. Cavanagh only received a yellow from Cormac Reilly and Joe left no-one in any doubt that he felt the punishment should be greater for the good of the game.

The reality, of course, is that it isn’t. The problem is that the GAA moves at a slow pace – and hopefully the new black card will rid the game of this sort of cynicism. Sean Cavanagh did what most players would do in the knowledge that a yellow card is the worst that you could expect. The black card will see involvement in a game over – and may be a better deterrent with cynical fouls.

Monaghan were unable to reproduce the form they showed against Donegal – and there is nobody better to exploit weaknesses that Tyrone. In principal, Joe’s point was spot on, but he took away from it in the manner of the analysis.

It looked and sounded too personal and we have seen much worse fouls that have actually injured players without that type of reaction. Good point, Joe, but it was a little bit lost in the manner it was made.

THE quarter-finals of the Donegal Senior Championship will take place next weekend, August 17/18. I think this is a good decision by the CCC. The players will have had ample time to recover and we should look forward to a good Championship. Kilcar against Glenswilly will be the big one, but the other three are no less interesting.

Can Tiger do it?

BY the time you are reading, the final golf major of the year – the US PGA Championship – will be underway. After his brilliant win at the WGC-Bridgestone Invitational, Tiger Woods is clear favourite to win. That was his fifth victory of the year, but the statistic that everyone is focussed on is that it has been 2008 since he last won a Major.

Can he do it, we wonder? Or will we see him in contention early on, but fade away? Tiger seems primed for victory, but he has looked like that in several Majors – most recently the British Open – but he has failed to deliver. Six Irish players take part, but unfortunately unless McIlroy or Mc- Dowell find their best form it’s unlikely any will be in contention.

THAT is a direct plea to David Moyes, Brendan Rogers and Andre Villas-Boas. ‘Them’, of course, refers to Wayne Rooney, Luis Suarez and Gareth Bale. None of them have taken part in pre-season matches, supposedly because they had slight injuries, but more likely because they didn’t want to play. It is obvious that all three want to leave their clubs, so surely they’d be better to let them out as quick as possible.

Loyalty in soccer is in short supply these days. Liverpool stuck by Luis Suarez through thick and thin – look where that got them.Rooney hasn’t been happy at Manchester United for the last couple of years and is doing noone – least of all himself – any favours with his attitude.

You could hardly criticise Bale if the opportunity to play for Real Madrid is on offer. But it all goes to prove that players are now in the driving seat – and I’m not sure if that’s a good idea!