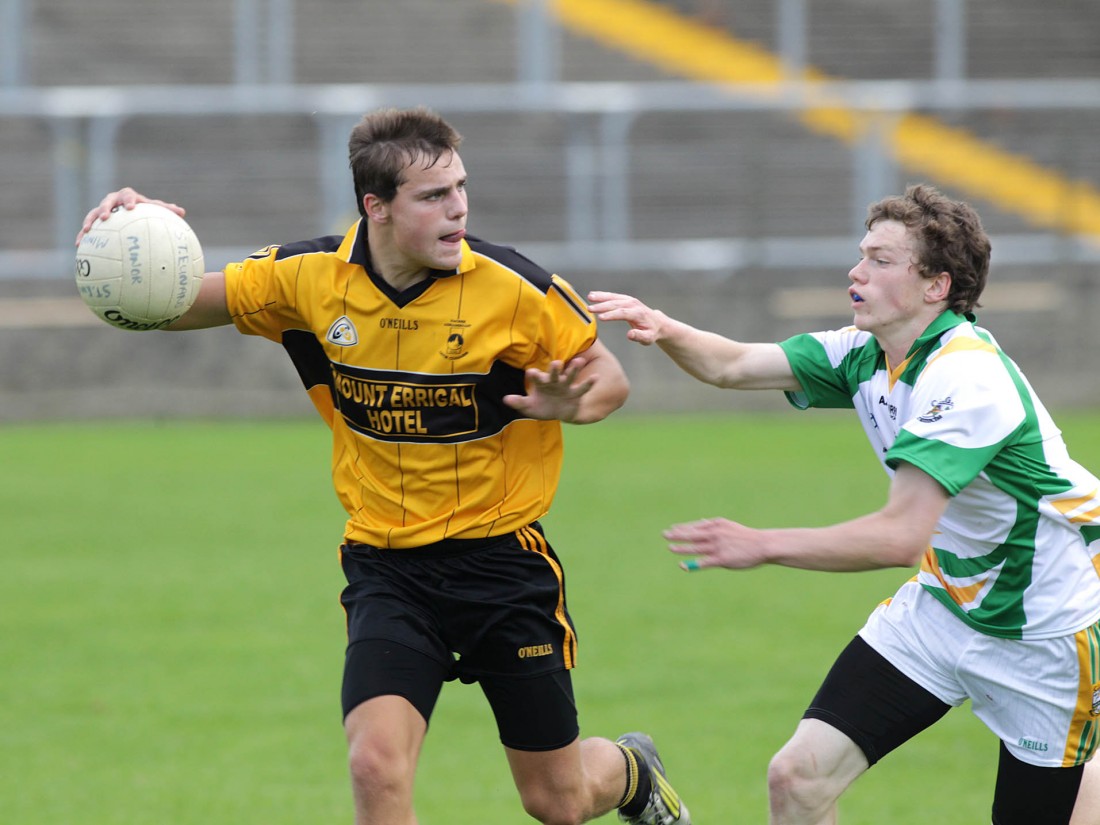 ST Eunan’s and Buncrana will meet in the 2013 Donegal minor football championship final following their wins over Four Masters and Aodh Ruadh on Wednesday evening.

The county minor finals are being run as a double header in MacCumhaill park on Sunday 1st  September. Na Rossa and Naomh Columba clash in the Division 2 final at 6.30 with St Eunan’s and Buncrana meeting at 8pm

ST EUNAN’S are through to the Minor final after they cruised past Four Masters in Lifford on Wednesday evening.

St Eunan’s struck for the first goal in the 21st minute. The lively Rory Carr won the ball out in front of his marker and laid off to the enrushing Conor O’Donnell.

The St Eunan’s captain slipped the ball into Conor McEniff, who showed great composure to round the Four Masters goalkeeper and pass the ball into the net and Eunan’s led 1-6 to 0-2 at half-time.

McEniff got the first score of the second period with a free, but Darren Doherty responded immediately after good link up play from Joe Ruck and Caolan Loughley.

St Eunan’s soon got to grips with them once again and they kicked the next six points in-a-row with Miller, Niall O’Donnell and McEniff (free) all scoring.

BUNCRANA held on the advances of Aodh Ruadh to reach their first Division 1 minor championship final in ten years.

Buncrana teed up a repeat of their last triumph at this grade, their 2000 final win over St Eunan’s, with a gritty and hard-fought win in an entertaining conest at Convoy.

Darach O’Connor netted a goal after just 18 seconds when he cut through to shoot past Daniel Kelly.

Eamon McGrath opened Aodh Ruadh’s account in the 13th minute and David McGurrin splendidly slammed over a free, right footed from the right flank, an impressive effort from one of the game’s top performers.

In midfielder Caolan McGonigle, Buncrana had the contest’s outstanding player, though McGurrin didn’t deserve to be on the losing side. It was he who scored the goal which put the Ballyshannon brigade ahead for the first – and only – time in the 30th minute. Pauric Patton slipped through the eye of a needle and McGurrin shot first time to the net.

McGonigle came to the fore with two magnificent place kicks, the first an expert ‘45 that sailed over the black spot and the second a free from a not too dissimilar position and at the break Sean Clerkin’s outfit were 1-5 to 1-4 in front.

McGurrin and McDonald kept Aodh Ruadh in touch, but then McGonigle took control, kicking two himself, brilliantly converting on each occasion with polish and poise, while O’Connor, who had a sometimes frustrating evening of it, came good with a massive point.
A pair of McGurrin frees brought Aodh Ruadh to within a point again and the nails were shortened in those nervy moments at the conclusion.
McGurrin and Patton kicked wide before a long-range McGurrin free was plucked from the sky by big Peter McLaughlin. In stoppage time, Buncrana sealed the deal when Joseph McGrory pointed after O’Connor’s superb ball set him free.