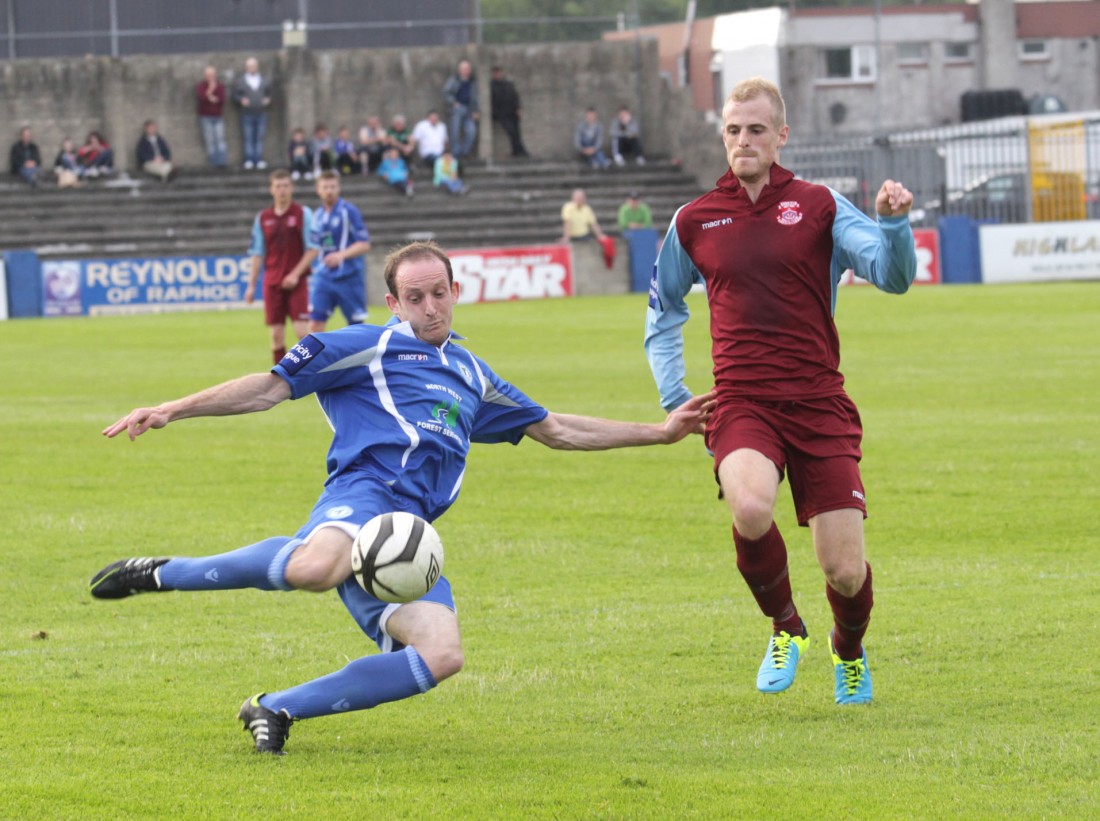 WITH chances of making the play-offs all but gone, Finn Harps boss Peter Hutton has described this week’s FAI Cup clash with Cobh as “a massive game” for Finn Harps but says he expects a tough battle from the visitors.

“There’s no doubting that this is a massive game for us now, but it is also going to be a very difficult task because Cobh are no mugs and they have added a few new and experienced signings to a youthful side and they won’t be easy to beat.”

Of course Harps already know how difficult the Cork men are to defeat having played them three times already this season.

Their initial league encounter saw Harps chalk up a 4-1 win, but since then they have drawn 2-2 twice, the last draw seeing Harps blow a 2-0 lead at home.

“It’s a big game for them too but we’ll be going for the win because it wouldn’t be ideal for us to have to go to Cobh again on a Tuesday for a replay and then have to trek back there again for a league game next weekend,” said Hutton.

That said the Harps boss admitted he’d gladly take victory even if it meant after a replay if it meant his team was still in the hat for the next round.

“The FAI Cup is a very special competition and it is something we want to do well in. As someone quipped to me during the week, we’re only three games away from Europe!

“In fairness we don’t want to be getting ahead of ourselves because we know Cobh will be difficult to beat but we want to do well in this competition now and it would be great if we can progress.”

For that to happen the Harps boss says his players need to find a little more self-belief and realise they can beat anyone in a one-off on their day.

“I think we have already proved over the course of this season that on our day we can match the best of them, the problem has been that we haven’t been able to do it often enough. It seems a long time away now but we might well have beaten Derry City in the League Cup but for the width of a post and the lads need to find that bit of confidence in themselves again.”

Against Cobh Hutton believes that return to confidence will be crucial, not just to keep the visitors at bay, but also to turn chances into goals.

“They have a good front four and they will create chances and cause problems but they will let us make chances too so we have to be strong at the back to keep them at bay and take our opportunities when they arise.”

Hutton also hopes that Harps fans return in numbers to Ballybofey on Friday night and get behind the team, despite last week’s disappointing result.

“I’d just reiterate what I said last week to the fans and urge them to come back out and get behind the team. The players remarked on the support they got and it was good to hear the crowd supporting the team because it creates an atmosphere and in the cup that is very important,” he said.

Meanwhile the Harps boss will plan for this week’s visit with more or less a full squad to choose from.

“At the minute there are no real injury concerns apart from Damien McNulty who sill isn’t in contention but we have good squad to choose from and we’re looking forward to hopefully progressing and being in the hat for the next round,” he concluded.