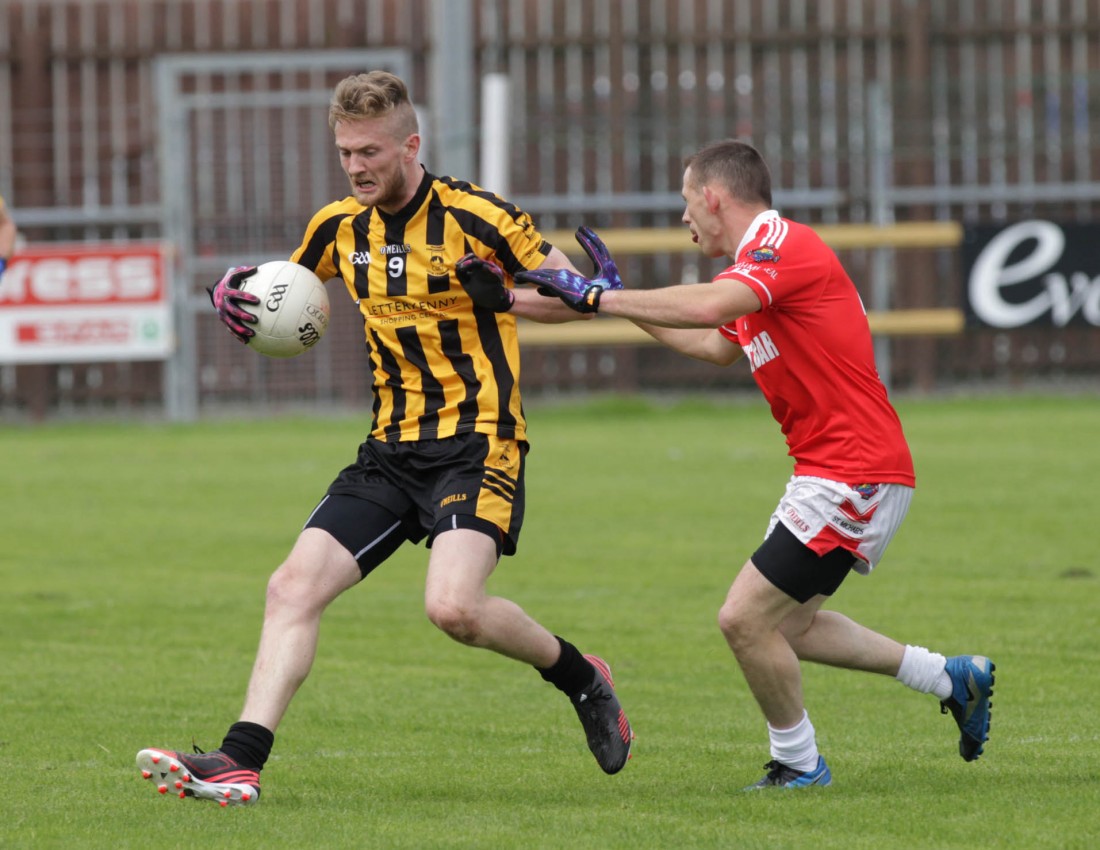 DONEGAL senior football panellist Ross Wherity is emigrating to New York this week – but St Eunan’s will fly the player back for their Donegal senior football championship quarter-final meeting with Malin next month.

The 25-year old heads to New York on Thursday and while it is unclear if he plans to return for Donegal’s 2014 campaign he will line out for St Eunan’s as they bid to retain the Dr Maguire Cup.

Wherity was called up by Jim McGuinness this year after impressing for St Eunan’s in their League and Championship-winning campaign in 2012.

After an encouraging National League, Wherity netted a goal with his first touch in Ulster Senior Football Championship action in May when he scored Donegal’s second goal in the win over Tyrone in Ballybofey.

Wherity had been on previous Donegal panels, but this had been his first really productive term with the county side.

Comfortable at midfield or anywhere in the forward division, Wherity is a versatile operator, who lined out at midfield yesterday as St Eunan’s steam-rolled understrength St Michael’s to cement their position at the top of Division 1.

It will have been his last slice of action until he returns for their Championship quarter-final meeting with Malin on September 14th in Buncrana.

“He’ll be a big loss to us in the League games, but we will be bringing him back for the Championship games,” confirmed the St Eunan’s manager Eamon O’Boyle.

“It is a one-off, must-win game and Ross is such an important player for us.

“He won’t be transferring out to a club in New York, but he’ll see what he gets out there. He’s got the opportunity to go and we certainly can’t fault him for that. Ross has been away before in America and Australia, but we’re delighted that he’ll be back to assist us in the Championship.”

Wherity was an integral part of St Eunan’s double winning side last year. In a first round play-off, it was Wherity who stormed through for a late winning goal against Kilcar in Convoy.

Eunan’s scored a facile win yesterday. St Michael’s were missing most of their first-teamers and Eunan’s coasted to a 3-18 to 2-02 win.

Donnacha Gallagher top scored for Eunan’s with 2-5 and O’Boyle has been encouraged by his contributions of late. He said: “Donnacha joined us last year, but he is really coming to form now. He has put in a lot of hard work and he us a real handful. He offers us a lot.”

Eunan’s will be missing Conall Dunne through suspension for the game against Malin, but will have Conor Gibbons, Conal McGinley and Caolan Ward back from Philadelphia in time for the last eight clash.

MCGEE OUT FOR TWO GAMES
Meanwhile, the Donegal News has learned that Donegal defender Eamon McGee has been hit with a two-game suspension following his sending off in the All-Ireland quarter-final against Mayo.

McGee was sent off in the 52nd minute for a stamp on Mayo’s Enda Varley. McGee will, under the new disciplinary procedures, serve his suspension in the opening two National Football League Division 2 fixtures of 2014, but it does not have any effect on his participation for Gaoth Dobhair in the Donegal SFC.