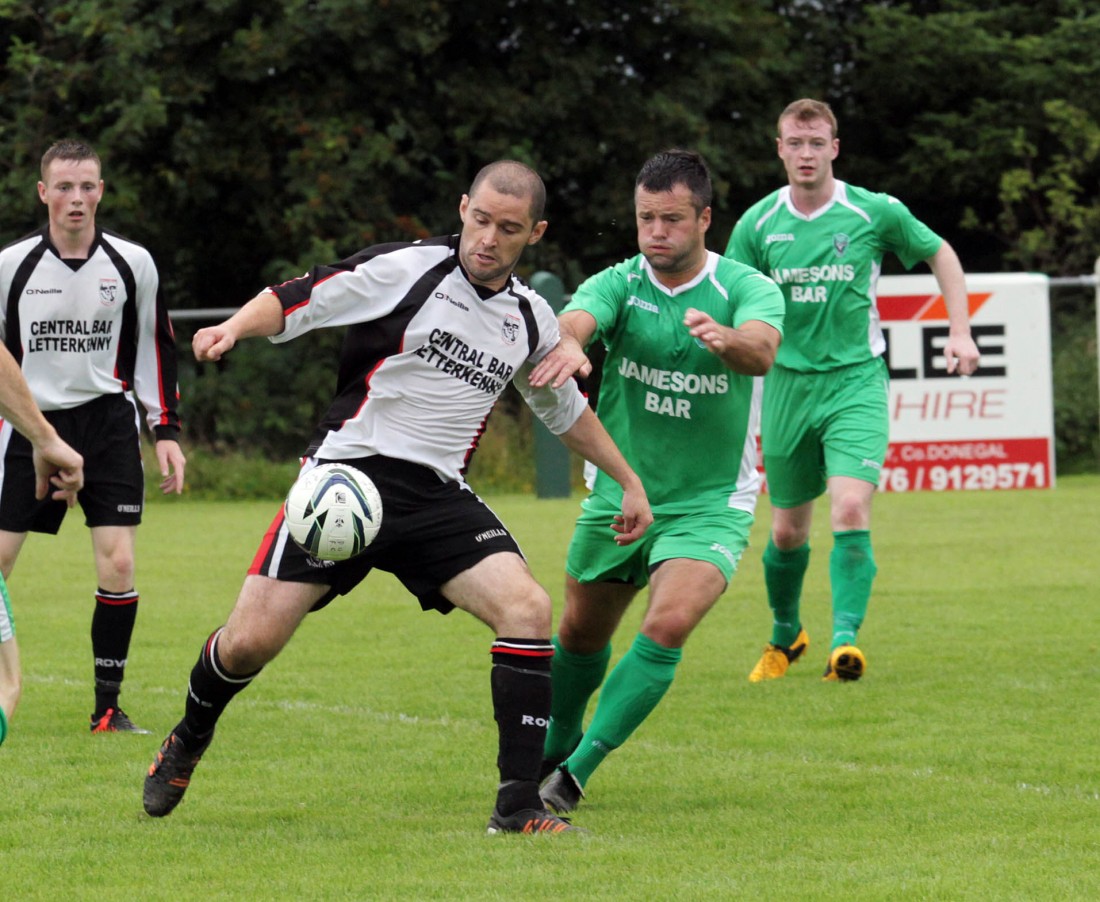 The win moves Mickey Rodgers team three points clear at the summit and with their next game against Derry City Reserves this Thursday night that advantage could be out to six points before closest rivals Cockhill Celtic play again.

Despite the huge volume of rain which fell across Donegal last Thursday evening the playing surface at St Patrick’s Park was in tip-top condition for two teams who wanted to play the ball on the ground where possible.

His coolness under pressure almost cost his side midway through the first half when he was dispossessed by Rovers striker Darren McElwaine but that aside he produced a flawless 90 minute performance.

It was McElwaine who netted the game’s opening goal inside two minutes. Picking up possession wide on the left from Oisin McMenamin’s pass he cut inside his marker before unleashing a right footed shot which whistled past Paul McCauley into the top corner of the net – a great individual goal.

Seimi Friel’s clever pass through the heart of the Rovers defence put Conor Carlin scampering clear and he rounded Jason Quinn in the Rovers goal before slotting into an empty net on 16 minutes to make it 1-1.

Three minutes before the interval Drumkeen finally netted the second goal that their play deserved. Seimi Friel and Bonner did the groundwork and Eunan Kelly was perfectly placed to slot home from close range.

Drumkeen netted their third goal on 65 minutes and, again, it came at the end of a well worked move. David Shovelin, who looked lively throughout, exchanged passes with Mark Marley on the edge of the area before firing a right foot shot beyond Quinn into the corner of the net.

Letterkenny were handed a life-line two minutes later when Odhran McMacken was upended inside the penalty area allowing McElwaine to dispatch the subsequent penalty high into the net.

Within minutes Drumkeen sprung their two new signings, Ronan Coyle and Packie Mailey, from the bench and they combined for the game’s last score.

Seimi Friel’s free kick over the top of the Letterkenny defence found Coyle at the back post and his cushioned volley back into the danger area was smashed home by Mailey from close range.

Next up for Drumkeen is another home game, against Derry City Reserves, on Thursday night next