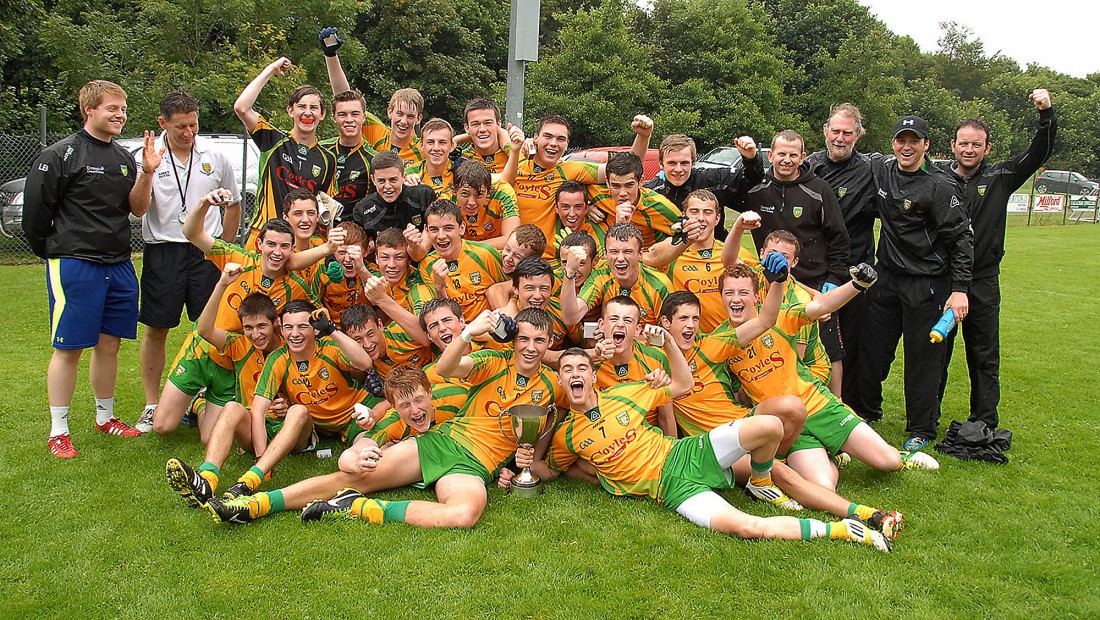 Donegal celebrate after winning the Buncrana Cup on Saturday.

DONEGAL’S first Buncrana Cup success in 2000 and the county has, not including the 2007 final against Cavan, the replay of which wasn’t played, won the competition six times.

On Saturday, Sean Paul Barrett’s team scored an impressive 3-6 to 0-3 win over Tyrone. Ethan O’Donnell, Nathan Gavigan and Michael Carroll netted the goals as the Tir Chonaill men claimed the fine scalp of the Red Hands.

Some impressive displays were on show, including the goalscorers, as well as Sean McHugh, Stephen McMenamin and Ciaran Maloney. It bodes well, of course, for the future of Gaelic football in Donegal – but history should provide us with some cautionary notes.

The transition between Buncrana Cup wins at under 16 level to success at minor level has been something that hasn’t yet been mastered, though.
Saturday’s win against Tyrone saw Donegal retain the Cup for only the second time.

Since 1996, Donegal has won only one Ulster Minor Football Championship. That was in 2006 when Sean Clerkin led the Donegal minors to a League and Championship double.

It has been the big success story in terms of keeping the talents flowing. Including subs, fourteen players from the 2004 and 2005 Buncrana Cup winning sides featured in the 2006 Ulster final win over Antrim at Croke Park. Declan Walsh, Shane Boyle, Paul McGinley and Gerard Ward were the exceptions in that.

From the 2004-05 Undery 16 teams, Walsh was joined by Michael Murphy, Leo McLoone and Martin McElhinney on the All-Ireland winning panel last year. Mark McGowan, Eoin Waide, Daragh Gallagher, James Carroll and Kevin Mulhern have worn senior Donegal jersies in the past to varying levels of success, while the 2004 team included one Seamus Coleman at centre-back.

The precursor to the Buncrana Cup was the Ted Webb Cup and in 1999 Martin McHugh guided Donegal to a final win over Mayo. The Donegal side included Paul Durcan, Colm McFadden and Christy Toye, who now have Celtic Crosses in their back pockets. That squad also contained Michael Maguire, Barry Dunnion and Conall Dunne, who played regularly for Donegal teams of the not-too-distant past.

Karl Lacey and Eamon McGee were key figures of the Buncrana Cup winning side of 2000, that also included Four Masters’ Michael Doherty, a regular under Brian McIver, and Ronan MacNiallais, who was a fringe member of previous county squads.

Luke Keeney came off the 2008 panel to graduate to the Donegal senior squad this year, while Dermot Molloy is the only graduate from the 2007 team, with Thomas McKinley having departed the squad earlier this year. 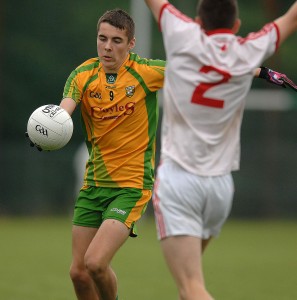 The drop-off between Buncrana Cup successes and Minor Championship failures is something that many have tried to remedy. Next year, the Donegal minors will be under the tuition of Declan Bonner – and the former Donegal senior boss is currently working with the Under 17 development squad. He believes that this is the squad that holds the key.

“I have taken the Under 17s and have worked with them on a weekly basis over the last five months. That hadn’t been done in the past and the 17s would have been left to their own devices,” he said.

“Previously, those guys who won the Buncrana Cup and who would’t go straight to minors were left in a vacuum and only playing club football. What we have done now is take those lads who are around 17 years old and worked with them at a high level. That has to be the way forward and hopefully we’ll see the fruits of it in years to come.

Donegal’s All-Ireland crop of 1992 contained many players who had tasted glory with the Under 21s of 1982 and 1997. The Vocational Schools competition was something that was once prided in Donegal. John Joe Doherty, Manus Boyle, Tony Boyle, Patrick McBrearty, Mark and Ryan McHugh are among those to have tasted success at this grade and advanced onto senior teams.

It is in the schools grades where Donegal’s progress is stunted largely.

The Vocational Schools competition in counties like Tyrone and Derry is not the be-all anymore. The MacRory Cup is where it’s at. Donegal does not win titles at schools level too often. The Michael Murphy-led team of 2007 from St Eunan’s College that won the MacLarnon Cup is one of the few exceptions to the rule, while Colaiste na Carraige has bucked a trend for schools of its size having punched in the high grades of the Vocational Schools competition in recent years.

A big development as been the advent of Colaisti Inis Eoghain, the combined Inishowen schools team, which is now entering its fourth season of Ulster Colleges competition. For the forthcoming year, they will have teams at U14.5 (Corn na nOg) and U16.5 (Ranafast Cup) levels as well as, for the first time, the U18.5 McLarnon Cup.

Donegal’s 2012 minor captain Darach O’Connor will lead the line for the Inishowen team in the McLarnon Cup, where he will be joined by the likes of John Campbell, Darren Gallagher, Danny Monagle and Tony McClenaghan from Declan Bonner’s county U17 squad, and Sean McHugh from SP Barrett’s Buncrana Cup winning U16 county team. 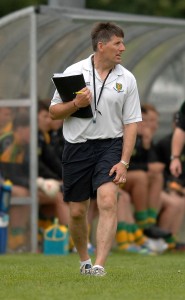 Donegal manager Shaun Paul Barrett, encouraging his team in the final with Tyrone.

The McLarnon team, which is substantially based on last year’s Ranafast team which reached the Ulster semi final before losing to eventual winners St Pat’s of Cavan, is managed by Sean Noonan, a member of Declan Bonner’s minor management for 2014.

With St Eunan’s College also competing at McLarnon level this autumn, the players involved will enjoy high calibre coaching and competition at a time when under-age club competitions in this county have long wrapped up. Filling that gap in the calendarshould lead to better prepared players for Bonner’s minor squad in 2014.

The Colaisti Inis Eoghain initiative – which actually came across road blocks in Donegal, never mind elsewhere, has been a real success story.

There have been rumblings of possible amalgamations elsewhere in the county – and this could only be a good thing if it led to more Donegal representation at schools level in Ulster.

Bonner and his ilk are attempting to join up the missing links. Their progress will be interesting.