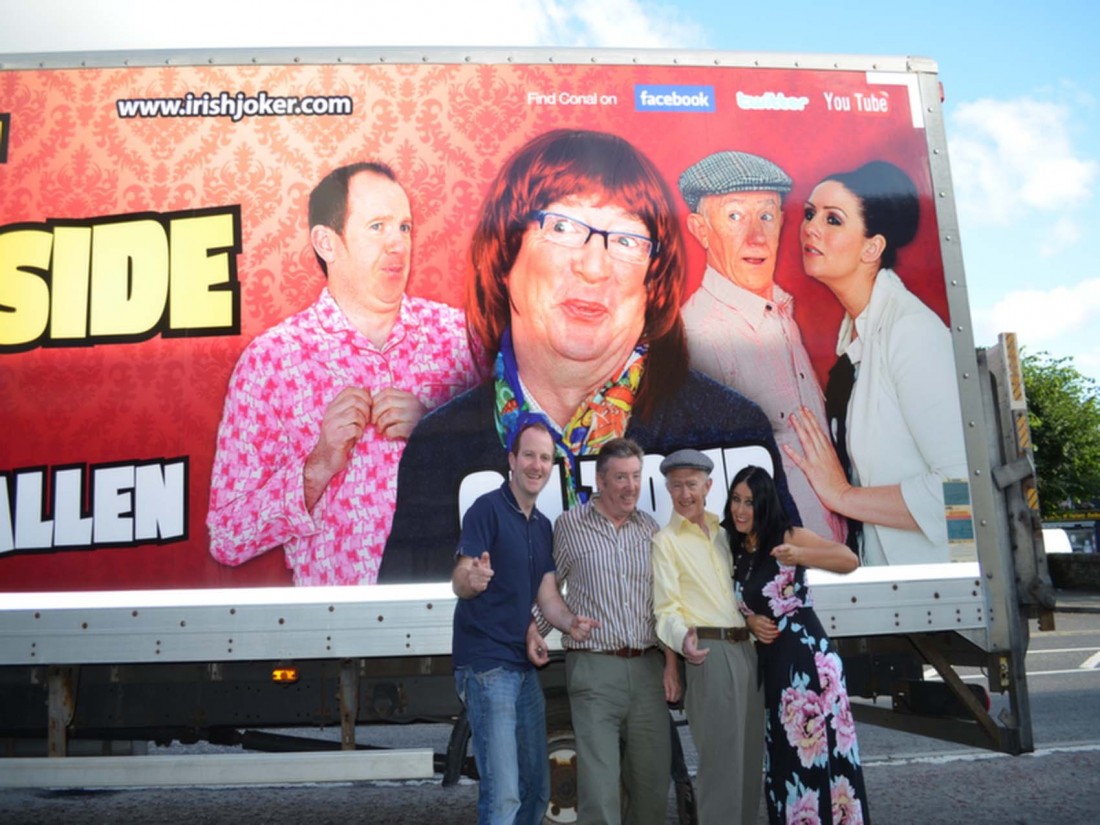 The cast of A Bit On The Side: Paddy McMenamin, Conal Gallen, Jack Quinn and Cathleen Bradley.

EARLIER this month popular Donegal comedian premiered his first every comedy play ‘A Bit On The Side’ in Ballybofey and the demand for tickets has been so huge that he has added four further Ballybofey dates to the upcoming nation-wide tour.

Conal and his son Rory began writing the comedy play three years ago and finally finished it in April. The play was launched on August 7 to a sold out audience at the Balor Arts Centre and received a standing ovation.

Due to the massive success and fantastic reviews, there have been four extra nights added to the Balor at the end of August and these already are close to selling out.
Conal said that he is ‘absolutely over the moon’ with the reaction to the first performance, and can’t wait to hit the road at the end of August.

“There is no better feeling than arriving to do a show to a full house, and by the way theatres are already booking, the whole tour could be sold out in advance”.
He usually does his Stand Up Comedy Show in the Waterfront Hall, Belfast, but this time around he is taking the play to the Grand Opera House.

“It will be my first time to perform in the Grand Opera House, and I am looking forward to it. It will suit the play perfectly”, said Conal.
Conal has already established one of the most successful touring circuits for any Irish comedian. He has been selling out theatres across the country for the past eight years, breaking box office records, year in and year out.

With such a large and hectic tour of this show, Conal has had to cut down on the number of stand up comedy shows. The play tours until mid-December, and then it’s back to stand up until the end of February. Then the play takes to the road again!
“To do this play, I really had to sit back and make the decision to step back from my live stand up shows. This was a hard decision to make; I have spent a long time, working very hard, building up my Stand–up tour. It has been my bread and butter all my life. To take a break from this to pursue the comedy play is a major risk. For it to be as successful as my stand-up comedy career, I have to give the play 100% of my time and effort.”

When asked what his audiences should expect from the play “A Bit On The Side”, he replied: “This is not a real deep, meaningful, hard thinking or clever play. It is just fun. The original working title was ‘I Suppose It Would Be Out Of The Question!’, so that should give you some idea of how deep and meaningful it is!

Imagine that you’ve had a real bad day or bad week. At the end of it all, you don’t need to go and see something that leaves you scratching your head, wondering what it’s about. Light hearted fun is what’s required and that is exactly what A Bit On The Side is all about! It’s just a laugh from start to finish!”

He is enjoying working with a cast for the first time.
“It is brilliant to be on stage with other people, for a change. The cast are fantastic. I have worked with each of them on separate occasions, as well as all together in other projects. We have always had a ball together! They are such a good bunch and a great laugh. More importantly, they make me laugh! Top people!”
It is a love story unlike any other. Wandering eyes, wandering feet, wandering hands…it’s all here! Scenes of nudity have been carefully left out in this saga of sex, drugs and deception.

(There weren’t any in the first place, says Conal). Join Bridie, Willie, Dick and Cynthia (Yes, Cynthia!) as this tale of passion and intrigue unfolds.
The Balor’s manager said: “Such was the demand for tickets that the two extra nights scheduled for August 30 and 31 were already sold out by the time Conal took to the stage for the premiere earlier this month. An extra night (Thursday, August 29) was announced after the show and, by the looks of things, it will sell out, too.”
Call Tel 07491 31840 for enquiries.