Advertisement
HomeSportGAABarry Moran: “We have to play for 70 minutes against Donegal”
Advertisement 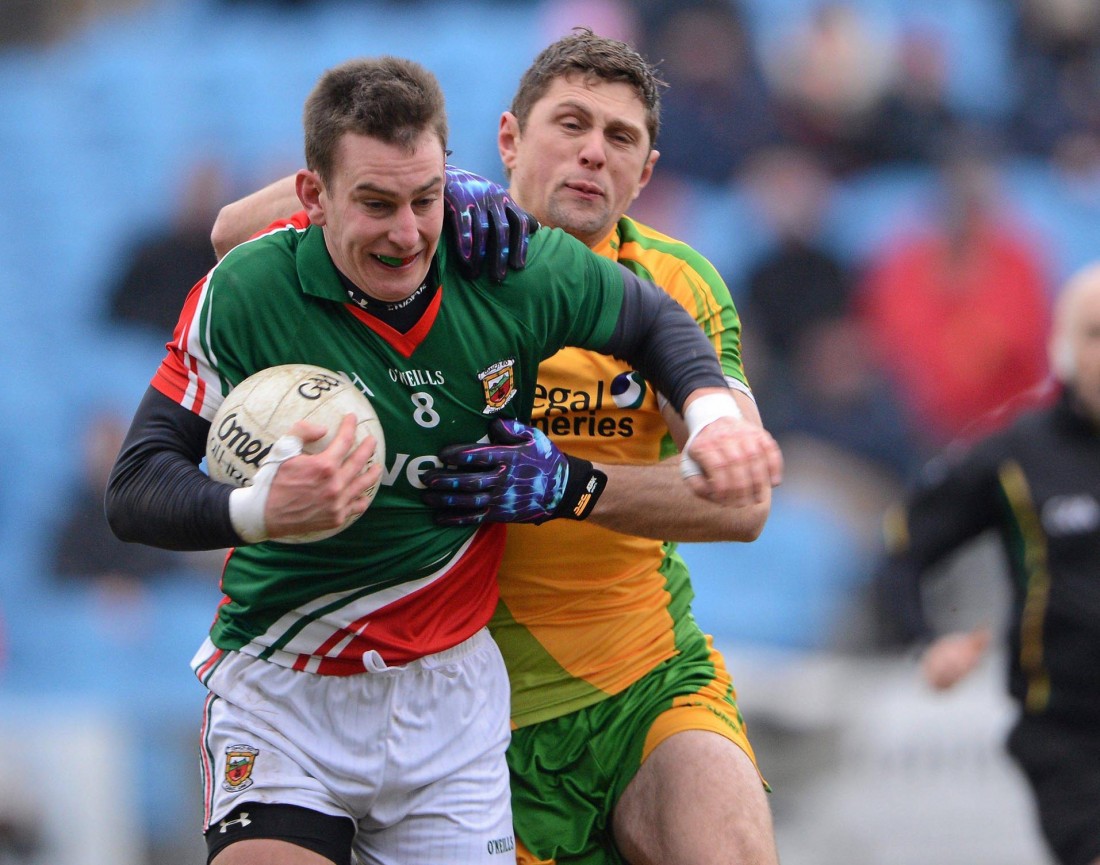 BARRY Moran believes that Mayo are well poised to exact revenge on Donegal this weekend.

After accumulating a whopping 9-48 in three facile wins over Galway, Roscommon and London, Mayo have become something of a connundrum. They appear a side with a renewed ruthless streak but it’s been pointed out at length that the westerners have yet to be tested having appeared to have something of a cakewalk to the Connacht Championship title.

Moran, though, insists that Mayo are well placed ahead of Sunday’s quarter-final at Croke Park.

“You can only beat who goes out in front of you,” he said.

“We had three games to win in Connacht. At the start of the year, when that draw was said, it was said that that was going to be the hardest route for us to retain the Connacht title.

“We went and we retained it fairly impressively, but no, we’re not worried in our own performance or anything like that, in the sense that we know on our day, if we go out and we play well, and we can play to the processes, put in the performance, we can beat anyone.

“So I know a lot of people are saying maybe (we’re) going into Croke Park without being tested, but it’s not really been a problem for us. We’d a good few challenge games – we played Kildare, we played Monaghan, we played Cavan as well as the in-house games. So I think that has us fairly prepped for next weekend.”

Those goals by Michael Murphy and Colm McFadden left deep scars that have given Moran and Mayo a cause to pursue this time around.

“People can say we were good, we matched them for 60 minutes, but look, it’s 70 minutes to win an All-Ireland; it’s gonna take 70 minutes effort to beat Donegal,” Moran said.

“So this weekend that’s the way we’re gonna be looking at. It’s 70 minutes complete, intense effort, and from there, I think if we put in our performance and we play as well as we can, we can beat anyone, so we’d be confident from that point of view, but at the same, we know that we have to be 100 per cent. We can’t go in a couple of per cent off or we’ll be beaten.”

Moran picked up an ankle injury while playing for his club, Castlebar Mitchells, in late March, only making his return in late June. He’s back to fitness now, but has been kept out of the first XV by the O’Sheas, Aidan and Seamus.

With their opposition in competitive games lacking an edge, Mayo’s in-house game have gained extra importance.

He said: “They have to be like that, if you really want to push on.

“I suppose from my point of view, it’s the best competition I can go for, in the sense that it’s a great claim to go against the two O’Sheas in the middle of the field. I’m trying to push them to the max, and they’re doing the same with me. So no, they’ve been intense the last couple of weeks. They have to be like that. We’re going into a quarter-final and we know it’s going to be a serious challenge in the next few weeks, so it’s important that they are like that.

“There’s been no complacency or anything like that coming from our team. We weren’t happy with our performance in the Connacht final, being honest with you. We won the game fairly handy in the end, but from our point of view, there was a lot of mistakes, a lot of wides, a lot of dropped balls, stuff like that. So we came back from that and we know if we went out with that same attitude this weekend coming, that we wouldn’t get through – it’s as simple as that.

“So from that point of view, we’ve been pushing on, and you have to be like that going into a quarter-final.”

Although it has appeared as if Donegal were the team on Mayo’s crosshairs from the outset, Moran was guarded when asked about Tir Chonaill’s season.

“We were kinda looking at ourselves, and we have been over the last couple of weeks,” he said.

“But when you’re looking up the other games on a Sunday, you’re looking at Donegal and these teams. Donegal by all accounts had an off day against Monaghan.

“They got over Laois and I can only imagine that they’re only raring to go next weekend. They’ll be looking forward to the challenge of playing us, and we’re looking forward to playing them. It’s a clean slate once you get into the quarter-finals. From there on in, it’s in Croke Park, and it’s just going to be a ding-dong battle, I think.

“There was a couple of areas we felt we didn’t do good enough on. On All-Ireland final day, our general skills let us down – our ball handling and that.

“So look, we’ve really gone back to basics. We’ve gone back to left-, right-foot kick-passing, same with the hand-passing.

“We’ve concentrated a lot on the tackling – that’s the kind of thing we’re looking at to improve, and they’re the kind of things that we think if we can nail them, we can go on and push on to late in the summer.”